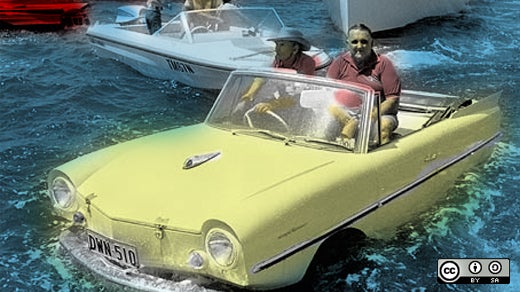 If you're interested in improving your GIMP (GNU Image Manipulation Program) skills and you'll be attending SCaLE 14x this month, you'll want to check out Akkana Peck's talk, Stupid GIMP tricks (and smart ones, too). Peck knows a thing or two about GIMP—she's the author of Beginning GIMP: From Novice to Professional. In her SCaLE 14x talk, Peck plans to answer the age-old questions, "How do you get rid of the ugly power lines in that landscape photo, and would it look better with a purple sky?" and "How do you take that picture of you and your ex and replace his face with Brad Pitt's?"

In this interview, she shares three of her favorite GIMP tricks, and she explains how GIMP stacks up against Photoshop.

Tell us about three of your favorite GIMP tricks

I think my favorite depends on what I've been working on recently. Three I like a lot:

What's a cool GIMP feature that many users might not know about?

A new one coming in 2.9/3.0: You can get to pretty much any GIMP function by typing / (slash) and then typing some keywords. No more hunting through the menu hierarchy for what you want. As an old command-line junkie, I expect to be using this all the time, though for now I'm still working on retraining myself to remember it's there.

How can I take photos of me with my ex and replace his face with Willie Nelson's?

Come to my talk!

It all comes down to using selection tools. There are lots of ways to make selections, but for cutting objects (like a face) out of a photo, I usually start with the lasso, being sure to feather the edges, and clean things up with the Quickmask.

What are the biggest areas in which GIMP needs to improve before people will think it's "as good" or better than Photoshop?

Honestly, I think a lot of the people claiming GIMP isn't as good as Photoshop are people who have invested a lot in learning Photoshop and want an excuse not to learn a new and different tool. If the GIMP team spent much time trying to make everything just like Photoshop, they'd never have time to implement great new features.

It's true there are some nice features Photoshop has that GIMP doesn't. Some are being addressed for GIMP 3.0, like high-color images. A lot of people will be very happy to see that. Other features, like non-destructive editing and CMYK, are still wish-list items that will have to wait until later.

I have a vision: 2016 will be the Year of the Open Source Haiku. What's your GIMP advice, given via haiku?