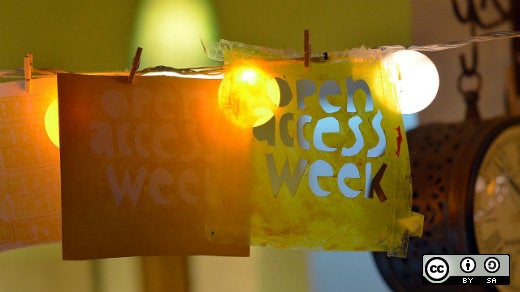 A stencil and a card made by Subhashish Panigrahi, CC BY-SA 4.0

Mobile Internet connectivity is growing rapidly in rural India, and because most Internet users are more comfortable in their native languages, websites producing content in Indian languages are going to drive this growth. In a country like India in which only a handful of journals are available in Indian languages, open access to research and educational resources is hugely important for populating content for the various Indian language Wikipedias.

Most commonly spoken Indian languages have had Wikipedia projects for almost a decade. Languages like Konkani and Tulu are new entrants in the Wikipedia family, and currently there are 23 Indian language Wikipedias. One example of high-quality open access content is the Open Textbook of Medicine, an offline encyclopedia consisting of Wikipedia articles related to medicine, which was created by a group of dedicated volunteer medical professionals that happen to be Wikipedia editors. There is enormous potential to grow Wikipedia in multiple languages with high-quality, open content like this.

To help fuel the growth of Wikipedia and its various projects, such as the Indian-language Wikipedias, the Wikipedia community has created an ecosystem with Wikimedia chapters and other affiliates, which are run by both volunteers and paid staff from the Wikimedia Foundation, an organization responsible for fundraising, technical, and community support. In India, Wikimedia India, the Centre for Internet and Society’s Access to Knowledge program (CIS-A2K), and Punjabi Wikimedians are three such official affiliates working on catalyzing the growth of the content and the communities.

Whereas Wikimedia India focuses on expanding all the Indian-languages content, Punjabi Wikimedians focus on Punjabi language content (in both Gurmukhi and Shahmukhi scripts), and CIS-A2K focuses on five languages: Kannada, Konkani, Marathi, Odia, and Telugu.

Indian-language Wikipedia projects can only grow with the help of volunteers editing their own language Wikipedias and adding missing information from a reliable sources, which is where open access content can help.

The 2016 International Open Access Week will be held October 24-30, 2016. The theme this year is Open in Action. The announcement explains, "International Open Access Week has always been about action, and this year's theme encourages all stakeholders to take concrete steps to make their own work more openly available and encourage others to do the same. From posting preprints in a repository to supporting colleagues in making their work more accessible, this year’s Open Access Week will focus on moving from discussion to action in opening up our system for communicating research."

Indian contributors show the spirit of Open in Action as they help add content to the various Indian-languages Wikipedias. They depend on open access to research and other publications to help millions of people, including those living in rural areas, who are joining us online.

What to read next
Tags
Open access
Subhashish Panigrahi

Will RIO Journal be the most open of its kind?