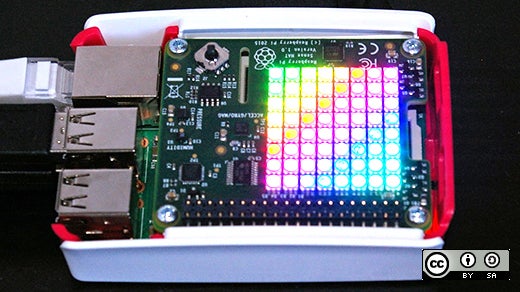 The Opensource.com team has been fascinated by the Raspberry Pi Sense HAT, a low-cost addon for the Raspberry Pi that enables astronauts and citizen scientists alike to easily collect measurements from a variety of sensors to conduct science experiments or just have fun.

So we decided to try one out ourselves. We grabbed a side room at our offices in Red Hat Tower and spent an hour or two learning what it can do. 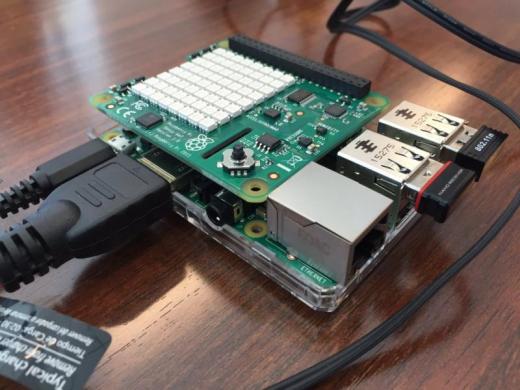 Then, it was time to try out some of the functionality. The Raspberry Pi Sense HAT provides a variety of ways for testing out interactivity and sensing the environment, including electronics for:

We got started by testing out the humidity and temperature sensors. After borrowing and slightly modifying some code from Ben Nuttall's GitHub repository, we were able to display a graph of the humidity in our room on screen the Sense HAT's screen.

A further extension of this code let us display the results on the Sense HAT's tiny screen, but with several of us gathered in the room, it was simply easier to display the output of our terminal window on the room's projector. Next, we tested the accelerometer.

Using the Creative Commons instructions on the Raspberry Pi, we designed a Magic 8 Ball. Except my team wasn't content with the default responses, and instead, decided to make it a Magic 8 Ball that answers questions the way that I do.

Unfortunately for me, that worked too.

Just made a magic eight ball that spouts @jehb-isms when we shake it.
h/t @Raspberry_Pi for the how-to! pic.twitter.com/b4o0CWBfox

Now that we've learned to use the Sense Hat, what's next? Sure, it's a fun toy, but it's also a working scientific instrument. Why not try out some 'real' science? Here are some of the projects we hope to try out next.

Have you tried experimenting with the Raspberry Pi Sense HAT? What have you built with it? Let us know in the comments below!

What to read next
Tags
Raspberry Pi
Science
Jason Baker