Why and how I became a software engineer

In their infinite wisdom, my parents decided that instead of all the troublemaking I was getting into at home, they would send me off to my uncle's office to learn how to use a computer. A few days later, I found myself on the 21st floor in a cramped room with six or seven other teens and a brand new computer on a desk perpendicular to the teacher's desk. It was made abundantly clear that we were not skilled enough to touch it. After three frustrating weeks of writing and perfecting DOS commands, the magic moment happened. It was my turn to type copy doc.txt d:.

The alien scratching noises that etched a simple text file onto the five-inch floppy sounded like beautiful music. For a while, that floppy disk was my most prized possession. I copied everything I could onto it. However, in 1989, Ugandans tended to take life pretty seriously, and messing around with computers, copying files, and formatting disks did not count as serious. I had to focus on my education, which led me away from computer science and into architectural engineering.

Like any young person of my generation, a multitude of job titles and skills acquisition filled the years in between. I taught kindergarten, taught adults how to use software, worked in a clothing store, and served as a paid usher in a church. While I earned my degree at the University of Kansas, I worked as a tech assistant to the technical administrator, which is really just a fancy title for someone who messes around with the student database.

By the time I graduated in 2007, technology had become inescapable. Every aspect of architectural engineering was deeply intertwined with computer science, so we all inadvertently learned simple programming skills. For me, that part was always more fascinating. But because I had to be a serious engineer, I developed a secret hobby: writing science fiction.

In my stories, I lived vicariously through the lives of my heroines. They were scientists with amazing programming skills who were always getting embroiled in adventures and fighting tech scallywags with technology they invented, sometimes inventing them on the spot. Sometimes the new tech I came up with was based on real-world inventions. Other times it was the stuff I read about or saw in the science fiction I consumed. This meant that I had to understand how the tech worked and my research led me to some interesting subreddits and e-zines.

Throughout my experiences, the fascinating weeks I'd spent writing out DOS commands remained a prominent influence, bleeding into little side projects and occupying valuable study time. As soon as Geocities became available to all Yahoo! Users, I created a website where I published blurry pictures that I'd taken on a tiny digital camera. I created websites for free, helped friends and family fix issues they had with their computers, and created a library database for a church.

This meant that I was always researching and trying to find more information about how things could be made better. The Internet gods blessed me and open source fell into my lap. Suddenly, 30-day trials and restrictive licenses became a ghost of computing past. I could continue to create using GIMP, Inkscape, and OpenOffice.

Time to get serious

I was fortunate to have a business partner who saw the magic in my stories. She too is a dreamer and visionary who imagines a better connected world that functions efficiently and conveniently. Together, we came up with several solutions to pain points we experienced in the journey to success, but implementation had been a problem. We both lacked the skills to make our products come to life, something that was made evident every time we approached investors with our ideas.

We needed to learn to program. So, at the end of the summer in 2015, we embarked on a journey that would lead us right to the front steps of Holberton School, a community-driven, project-based school in San Francisco.

My business partner came to me one morning and started a conversation the way she does when she has a new crazy idea that I'm about to get sucked into.

Zee: Gloria, I'm going to tell you something and I want you to listen first before you say no.

Zee: We're going to be applying to go to a school for full-stack engineers.

Zee: Here, look! We're going to learn how to program by applying to this school.

Me: I don't understand. We're doing online courses in Python and...

Zee: This is different. Trust me.

Zee: That's not trusting me.

What I read sounded similar to something we had seen online. It was too good to be true, but we decided to give it a try, jump in with both feet, and see what would come out of it.

To become students, we had to go through a four-step selection process based solely on talent and motivation, not on the basis of educational degree or programming experience. The selection process is the beginning of the curriculum, so we started learning and collaborating through it.

It has been my experience—and that of my business partner—that the process of applying for anything was an utter bore compared to the application process Holberton School created. It was like a game. If you completed a challenge, you got to go to the next level, where another fascinating challenge awaited. We created Twitter accounts, blogged on Medium, learned HTML and CSS in order to create a website, and created a vibrant community online even before we knew who was going to get to go.

The most striking thing about the online community was how varied our experience with computers was, and how our background and gender did not factor into the choices that were being made by the founders (who we secretly called "The Trinity"). We just enjoyed being together and talking to each other. We were all smart people on a journey to increasing our nerd cred by learning how to code.

For much of the application process, our identities were not very evident. For example, my business partner's name does not indicate her gender or race. It was during the final step, a video chat, that The Trinity even knew she was a woman of color. Thus far, only her enthusiasm and talent had propelled her through the levels. The color of her skin and her gender did not hinder nor help her. How cool is that?

The night we got our acceptance letters, we knew our lives were about to change in ways we had only dreamt of. On the 22nd of January 2016, we walked into 98 Battery Street to meet our fellow Hippokampoiers for the first time. It was evident then, as it had been before, that the Trinity had started something amazing. They had assembled a truly diverse collection of passionate and enthusiastic people who had dedicated themselves to become full-stack engineers.

The school is an experience like no other. Every day is an intense foray into some facet of programming. We're handed a project and, with a little guidance, we use every resource available to us to find the solution. The premise that Holberton School is built upon is that information is available to us in more places than we've ever had before. MOOCs, tutorials, the availability of open source software and projects, and online communities are all bursting at the seams with knowledge that shakes up some of the projects we have to complete. And with the support of the invaluable team of mentors to guide us to solutions, the school becomes more than just a school; we've become a community of learners. I would highly recommend this school for anyone who is interested in software engineering and is also interested in the learning style. The next class is in October 2016 and is accepting new applications. It's both terrifying and exhilarating, but so worth it.

My earliest experience with an open source operating system was Fedora, a Red Hat-sponsored project. During a panicked conversation with an IRC member, she recommended this free OS. I had never installed my own OS before, but it sparked my interest in open source and my dependence on open source software for my computing needs. We are advocates for open source contribution, creation, and use. Our projects are on GitHub where anyone can use or contribute to them. We also have the opportunity to access existing open source projects to use or contribute to in our own way. Many of the tools that we use at school are open source, such as Fedora, Vagrant, VirtualBox, GCC, and Discourse, to name a few.

As I continue on my journey to becoming a software engineer, I still dream of a time when I will be able to contribute to the open source community and be able to share my knowledge with others.

Standing in the room and talking to 29 other bright-eyed learners was intoxicating. 40% of the people there were women and 44% were people of color. These numbers become very important when you are a woman of color in a field that has been famously known for its lack of diversity. It was an oasis in the tech Mecca of the world. I knew I had arrived.

The notion of becoming a full-stack engineer is daunting, and you may even struggle to know what that means. It is a challenging road to travel with immeasurable rewards to reap. The future is run by technology, and you are an important part of that bright future. While the media continues to trip over handling the issue of diversity in tech companies, know that whoever you are, whatever your background is, whatever your reasons might be for becoming a full-stack engineer, you can find a place to thrive.

But perhaps most importantly, a strong reminder of the role of women in the history of computing can help more women return to the tech world, and they can be fully engaged without hesitation due to their gender or their capabilities as women. Their talents will help shape the future not just of tech, but of the world. 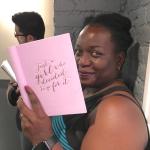 Gloria is a full stack software engineer in the making at Holberton School, who aspires to be a major contributor to an open source project on deep learning (Keras.io). She hopes that it will facilitate one of her major goals - meet life that did not evolve on Earth.
More about me