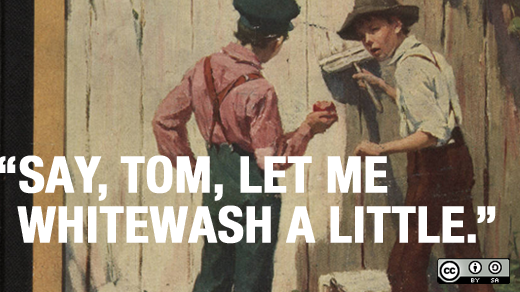 You know the scene. The one In Mark Twain's The Adventures of Tom Sawyer. The book's plucky hero learns that his Aunt Polly wants him to spend his day off whitewashing the fence. Tom, of course, would rather be doing something—anything—else, and when "he began to think of the fun he had planned for this day [...] his sorrows multiplied."

So he hatches a plan to trick the neighborhood boys into doing the work for him, even paying him to do it. He just needs to make them think the work is an exciting privilege, not drudgery.

And it works. Poor Ben Rogers is the first to succumb. He foregoes not only an afternoon of swimming, but also a delicious apple—all to be a part of the group quickly gathering around the fence. By the end of the day, Tom's little community has finished his work for him, and Tom is counting his spoils.

In The Open Organization Jim Whitehurst decries this "'Tom Sawyer' model of collaboration," in which organizations treat external communities as Tom treated his buddies: as gullible drones willing to work without any promise of reciprocation. It's the model of collaboration at work in so many accounts of successful "crowdsourcing" efforts, where companies tap the creativity and wisdom of communities simply to further their own ends. It's an approach that's just not sustainable, Whitehurst writes. How many times could Tom expect his friends to work for him without receiving anything in return?

Open sourcing, Whitehurst says, is different from crowdsourcing is several ways, not least of which is its tendency to reciprocate—and often multiply—community efforts. But open sourcing requires a new mindset:

To do this, you must transition into thinking of people as members of a community, moving from a transactional mind-set to one built on commitment. Perhaps more importantly, you need to apply the same principles to your employees—the folks you pay—as to people who might volunteer their efforts for free.

Treating internal and external communities as equals, really listening to and understanding their shared goals, and locating ways to genuinely enhance those goals—that's the key to successfully open sourcing a project. Crowdsourcing takes what it can; it turns people and their ideas into a resource. Open sourcing reciprocates where it can; it channels people and their ideas into a productive community.

Chris Grams, who's written about Tom Sawyer syndrome multiple times, articulates open sourcing's benefits succinctly: Creating a community around yourself doesn't work; an organization must engage communities that are already coalescing around shared passions and beliefs. In this way, then, they remain humble participants in something bigger than themselves.

Occasionally the fence will indeed get painted as a community responds to an organization's attempts to support it. And occasionally it won't—occasionally a community will reorient an organization's priorities, saving it valuable resources in the process. That kind of radical openness to change may lead to perhaps one of the most frightening (and yet beneficial) outcomes of open sourcing: complete course-correction.

An open approach might just make those fences obsolete.