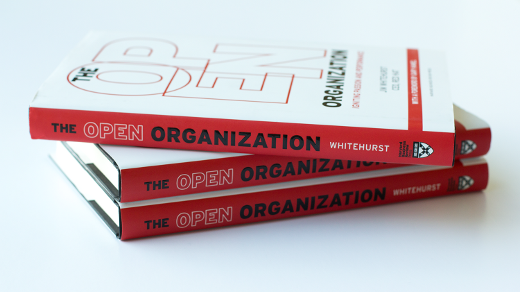 And making sparks requires friction. Unfortunately (as Rebecca Fernandez said last week of meritocracy), friction gets a bit of a bad rap these days. Friction indicates discomfort. It's a sign that things aren't moving smoothly. It's something we'd prefer to avoid.

But here's the thing about friction: movement isn't possible without it.

Friction is the force that allows our feet to propel us forward. It's at work when tires grip asphalt. Without it, we'd get nowhere. Utter inertia.

This week, we're discussing ways we can put friction to work and harness its productive potential as we strive to make our organizations more open.

In the book club this week, we'll be discussing "Chapter 5: Letting the Sparks Fly."

The lack of frank dialogue is the single biggest controllable weakness that most companies impose upon themselves. Being nice and letting things slide add up over time to an organization that knows its core problems but is unable to act. While conflict avoidance isn't a direct outcome of a conventional organizational structure, hierarchies clearly tend to soften bad news when it's going up the chain. All but the brashest have difficulty asking questions in a rigid hierarchy. Finding ways to foster frank, productive feedback and debate can improve the performance of any organization (p. 130)

In this chapter, Jim turns his attention to classic "brainstorming" techniques, especially those Alex Osborn pioneered in the late 1940s. Today, people tend to use the term "brainstorm" to refer to any practice of ideation, but Osborn coined it specifically to label group ideation sessions in which participants received nothing but positive reinforcement for their contributions. As Jim mentions in this chapter, telling people "there's no such thing as a bad idea" is a popular way of setting the stage for such sessions. Everyone tosses ideas into the mix and must refrain from immediately criticizing what they hear.

Theorists have recently begun criticizing classic brainstorming techniques, Jim says, because they tend to espouse groupthink, encourage conformity, and privilege the particularly outspoken. In other words, they try to remove friction from the decision-making process.

Bad idea. Productive dissensus, Jim writes, is actually a better vehicle for fostering great ideas. Sure, it might make a team appear less agile, but that's the price of ensuring that the best ideas emerge and undergo productive refinements. Leaders in open organizations need to find ways to foster productive frictions—then prepare themselves for challenges to their decisions, Jim warns. They need to develop "thick skins" when they start to receive the frank and honest feedback they're requesting.

When William Morris insisted that "you can't have art without resistance in the material," he might as well have been speaking of any creative endeavor. Friction, resistance, and dissensus aren't to be avoided. They're the very motors of innovation.

And this raises the following questions:

A message from Jim

What to read next
Tags
The Open Organization
OpenOrgChat
Bryan Behrenshausen