Open education is about improving lives, not taking tests 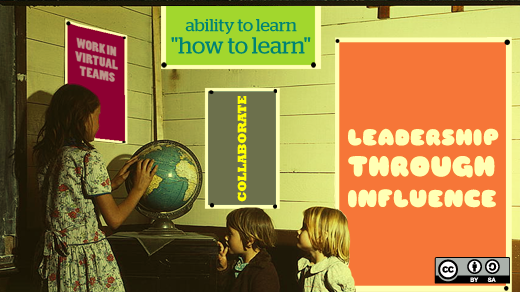 While recently reading The Innovator's Mindset: Empower Learning, Unleash Talent and Lead, by George Couros, I was struck by the parallels between the author's thinking and that of Jim Whitehurst in The Open Organization: Igniting Passion and Performance.

"Sometimes it scares me to think that we have taken the most human profession, teaching, and have reduced it to simply letters and numbers," Couros says early in the book. "We place such an emphasis on these scores, because of political mandates and the way teachers and schools are evaluated today, that it seems we've forgotten why our profession exists: to change—improve—lives."

In other words education has lost it's "Why?"—and that is central to its mission.

"People join us because they want to," Whitehurst says. "Contribution is critical, but it's not a quid pro quo. The best ideas win regardless of who they come from. We encourage and expect open, frank, and passionate debate. We welcome feedback and make changes in the spirit of 'release early—release often.' In short, we've found that the best practices in creating open source software also translate well into managing the entire company."

The visceral connection that community members have for their work is something they much more easily communicate and share with clients, whether in education or in the marketplace. Those of us in open organizations "buy in" to what we do because we believe in what we are doing and we are able to "sell" that idea to others.

In this vein, George Couros cites the work of Simon Sinek, specifically How Great Leaders Inspire Action in which Sinek explained that all great organizations "start with their 'why' and then move toward the what and the how."

Likewise, Jim Whitehurst says, "The conventional approach to business management was not designed to foster innovation, address the needs and expectations of the current workforce that demands more of jobs, or operate at the accelerated speed of business. I came to realize, in other words, that the conventional way of running companies had major limitations that are now becoming more acute."

In like manner, the conventional approach in education was not designed to foster innovation, and it is not meeting the needs of our students or the workforce they enter. Couros hopes his book and the ideas contained therein can change the paradigm in education. His "Why?" is, "When forward-thinking schools encourage today's learners to become creators and leaders, I believe they, in turn, will create a better world." The Open Organization can provide a model for education that capitalizes on everyone's passion, provides an environment for innovation and serves as a catalyst for the change envisioned in The Innovator's Mindset.

Open source communities operate on a level beyond crowdsourcing, going beyond the one-way and one-time-only arrangements in which a lot of people give their ideas or answers but don't engage with each other over time. Instead, the way they operate is better described as open sourcing, where contributors work together as a community, building on each other's work, to arrive at the best solution to a complicated problem, according to Whitehurst.

On the other hand, George Couros writes about "crowd accelerated innovation," which Twitter and other social media that allow people with a common interest to more easily connect can actually facilitate.

Couros draws on points made in Chris Anderson's 2010 TED talk about "Crowd Accelerated Innovation." In that talk Anderson noted that, "The bigger the crowd, the more potential innovators there are." Anderson also said, "You need clear, open visibility of what the best people in that crowd are capable of because that is how you will learn, how you will be empowered to participate." An open organization with its inherent transparency creates the necessary dynamic that facilitates this visibility and promotes the creating, sharing, and synthesizing new ideas.

It's easy to see that an open organization benefits education and facilitates innovation in a way that is not possible in the old "top down" model of management. It's not hard to imagine an education system that rewards openness and innovation. Transparency benefits everyone and encourages innovation while reducing silos in the education community. Couros states in the book that education leaders "must promote and capitalize on open, connected learning." He dedicated an entire chapter in the book to the concept of openness and open source in education. He embraces the open ethos and encourages his readers to do the same. He emphatically states that, "So whether it is developing better dancers, creating or remixing music, or designing a better classroom experience, the more open we are, the more likely something amazing will come out of it."

"Our world today is participatory," he says. "Sharing should not be the exception, but the rule."

What to read next
Tags
The Open Organization
Education
Don Watkins