A 7-step plan for engaging your community's naysayers 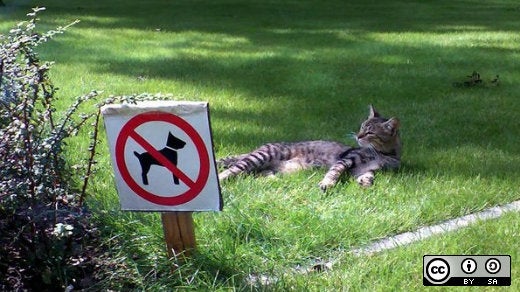 When you practice open communication and invite feedback, you get a lot valuable input that can improve your ideas, projects, and decisions. Yet one of the most common questions I hear is this: "That's all well and good, and I agree, it's best to open yourself up to that kind of feedback. But what about that one guy. . .?"

You know the one they're talking about. It's Mr. Grumpy, who inevitably shows up and says things like, "Oh, that won't work here" or "We already tried something like that," yet never seems to offer any helpful or productive alternatives.

Don't be fooled by Mr. Grumpy's name. Mr. Grumpy can be a man or a woman, and sometimes her demeanor is more skeptical than argumentative. But whatever form your Mr. Grumpy takes, you know who I'm talking about, and I've pulled together seven steps to help you engage Mr. Grumpy in a productive dialog.

Mr. Grumpy doesn't make this easy, because the kinds of comments and feedback you'll hear from him sure don't sound like they are being delivered with good intentions.

Yet once you get to know Mr. Grumpy, you will find that because of his behavior, he is well accustomed to being treated as if he's bringing everyone down. You can surprise him by making a deliberate choice to assume that he's trying to be helpful.

Use your imagination during this step. Challenge yourself to think of a positive reason why someone might say what Mr. Grumpy is saying in that moment. After all, each and every one of us has the potential to become Mr. Grumpy, if the conditions are ripe for it. Some common positive intentions that you can attribute to Mr. Grumpy include:

Speak that intention out loud. Say something like, "It sounds like you are worried that we will break something that's working well today, and not get enough value from these changes to justify that. Is that about right?"

Challenge yourself to think of a positive reason why someone might say what Mr. Grumpy is saying in that moment.

Even if you guess wrong, Mr. Grumpy will correct you, saying something like, "No, it's not that. It's that we've tried things like this before, and it seems like we're headed down the same path again."

2. Seek first to understand, then to be understood

After you've helped Mr. Grumpy find her positive intention in the conversation, it's time to start asking questions about her perspective. Often, we make the mistake of assuming that we know what Mr. Grumpy is going to say, along with her reasons behind it. Pay attention to the moment when you are inclined to explain your own perspective or reasoning, and tell yourself to hold off. Ask more questions first.

When you've asked enough questions that you can rephrase Mr. Grumpy's concerns in your own words, and she confirms that you understand, that's the best time to offer your own perspective and reasoning.

Often, Mr. Grumpy will hone in on a limitation or risk that you've already accounted for. When that happens, it's easy to be dismissive of Mr. Grumpy's concerns. Instead, try openly acknowledging that limitation or risk. Go ahead and share other ones that Mr. Grumpy hasn't brought up, as well. Write them down, on a whiteboard or in your notes, so that Mr. Grumpy sees you are listening to him. Explain what you're doing to account for that issue, and also be transparent about the fact that you don't have all the answers. Invite Mr. Grumpy's perspective on the issue.

Conversations with Mr. Grumpy are uncomfortable in part because she often brings our own fears to the surface. Be willing to make yourself vulnerable, and share what's on your mind. You might say, "You know, when you bring up that risk, it scares me a bit because I know it's something we can't fully account for. . ." or "I'll admit, I'm worried that I won't be able to get the support I need to make this successful."

Conversations with Mr. Grumpy are uncomfortable in part because she often brings our own fears to the surface.

Mr. Grumpy will be taken aback, because she is so used to playing a different role in these conversations. When you voice your fears to Mr. Grumpy, and she sees that you don't have all the answers, you will often find that she shifts her behavior, as well, and responds by wanting to make the project more successful.

By now, you may have some ideas for a productive role that Mr. Grumpy can play in your project. Mr. Grumpy's default role tends to be overusing his strengths and turning them into weaknesses. Yet those same capabilities can make him an asset, if applied in a more productive manner.

For example, if Mr. Grumpy is one who pokes holes in every idea, he's a detail-oriented thinker who might be an excellent helper when you need quality or user testing later in the project. Compliment his attention to detail, and ask if he'd be interested in contributing in this way when the opportunity is available.

If Mr. Grumpy is the guy who speaks up on behalf of the Watercooler Complaint Association, he has the potential to be a trusted liaison between the project team and other stakeholder groups, helping all sides understand each other's concerns and serving as a fact checker for both.

A good way to close the conversation is to say something like, "Say, I could really use someone who . . . I know it's a lot to ask, but is that something you might be willing to take on? Don't feel rushed to give me an answer."

Sometimes, despite applying all of the previous steps, Mr. Grumpy just won't be ready to let go of something in a conversation. And that's okay. Be willing to let Mr. Grumpy have the last word, and to leave things at, "Well, I can't say that you've changed my mind, but you have given me a lot to think about. Thank you for that."

It's important to keep Mr. Grumpy informed about the project, and to continue to have conversations. In the future, you might be able to bring Mr. Grumpy's requirements back into the project, or her requirements might evolve to better fit the direction of your efforts. But the only way that can happen is if you make an effort to check in, every so often, and let Mr. Grumpy know how things are going.

Something surprising often happens in these conversations. By the end, you come to appreciate Mr. Grumpy's divergent viewpoint, and Mr. Grumpy values working with someone who listens to her perspective, even if you don't change every detail to her liking.

Find an authentic way to express your desire to stay in touch.

As you prepare to leave the conversation with Mr. Grumpy, find an authentic way to express your desire to stay in touch. You might say something like, "I've really learned a lot from our discussion today, and I hope that we can continue to stay in touch. Would it be alright if I reached out from time to time, to give you an update on where things are headed, and get your thoughts?"

When I've applied these steps in my own conversations, I've find that they don't just change Mr. Grumpy for the better. They also change my attitude toward Mr. Grumpy, which in turn, helps us build a valuable partnership that leads to better outcomes for everyone.