In a nutshell, an Arduino is an open hardware development board that can be used by tinkerers, hobbyists, and makers to design and build devices that interact with the real world. While Arduino refers to a specific type of board design, it can also be used to refer to a company which manufactures a specific implementation of these boards, and is typically also used to describe the community around compatible boards made by other people or companies which function in a similar way.

For more on the basics, watch this quick video below.

What makes up an Arduino?

Arduinos contain a number of different parts and interfaces together on a single circuit board. The design has changed through the years, and some variations include other parts as well. But on a basic board, you’re likely to find the following pieces:

How do I program an Arduino?

Most Arduino enthusiasts, especially when they are starting out, will choose to use the official integrated development environment (IDE) for the Arduino. The Arduino IDE is open source software which is written in Java and will work on a variety of platforms: Windows, Mac, and Linux. The IDE enables you to write code in a special environment with syntax highlighting and other features which will make coding easier, and then easily load your code onto the device with a simple click of a button.

The code for Arduino is generally written in Wiring, which is based on the Processing programming language. For more on getting started with Arduino programming, visit the official documentation. 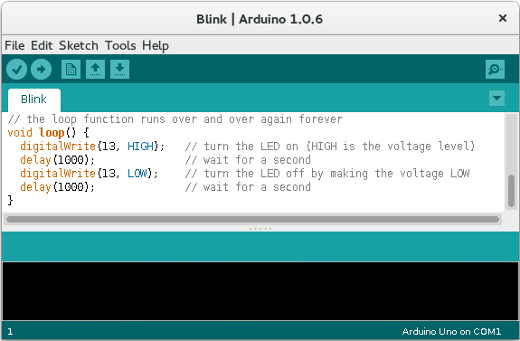 A screenshot of the Arduino integrated development environment.

Here at Opensource, we have written articles on a number of projects and tools which make use of the Raspberry Pi for learning, conducting research, and just for fun. These are a few of our favorites: