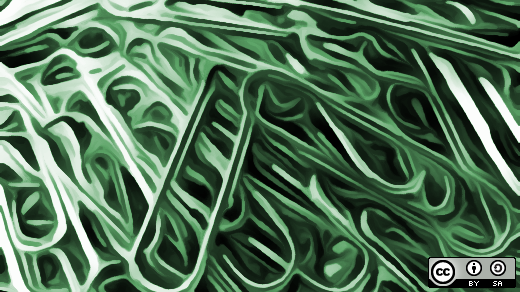 Information: Whether we realize it or not, we collect a lot of it—interesting snippets, links, research for school or work, recipes, quotes, and a whole lot more.

Millions of people turn to Evernote to organize all that information. There's no denying that Evernote is a useful and powerful tool. But it's also a closed source one.

Maybe you want to take control of your information and move away from a closed, proprietary tool. Maybe you're disgruntled about the recent changes to Evernote's services. Maybe you just want to take notes the open source way. Whatever your reasons for moving away from Evernote, there are open source alternatives out there.

Let's take a look at a few of those alternatives.

Before we begin, I need to point out that the applications I look at are not clones of Evernote. They're alternatives and replacements to it. That means you'll love some of the features in these apps more than anything in Evernote, but you're also likely to find something you love about Evernote missing. Give a few of them a try, though, and see what they have to offer. Whether you appreciate the improved data structure or just the freedom of being able to access your notes on any number of devices without restriction, there's a lot to enjoy about these open source alternatives.

If you're looking for a cross-platform, hybrid-hosted Evernote replacement, then you need look no further than Joplin. You can host Joplin yourself using NextCloud, WebDAV, and several other online storage services, so you don't have to perform a complicated server installation. Your notebooks can be encrypted and versioned, and you can create templates for types of notes you create often. Joplin uses Markdown (and allows Markdown plugins for additional features), with support for advanced math formulae, interactive checkboxes, and note-to-note linking.

Joplin is ideal if you share notebooks with someone else, because it has a client for everything: Linux, Mac, Windows, iOS, Android, and even the terminal. 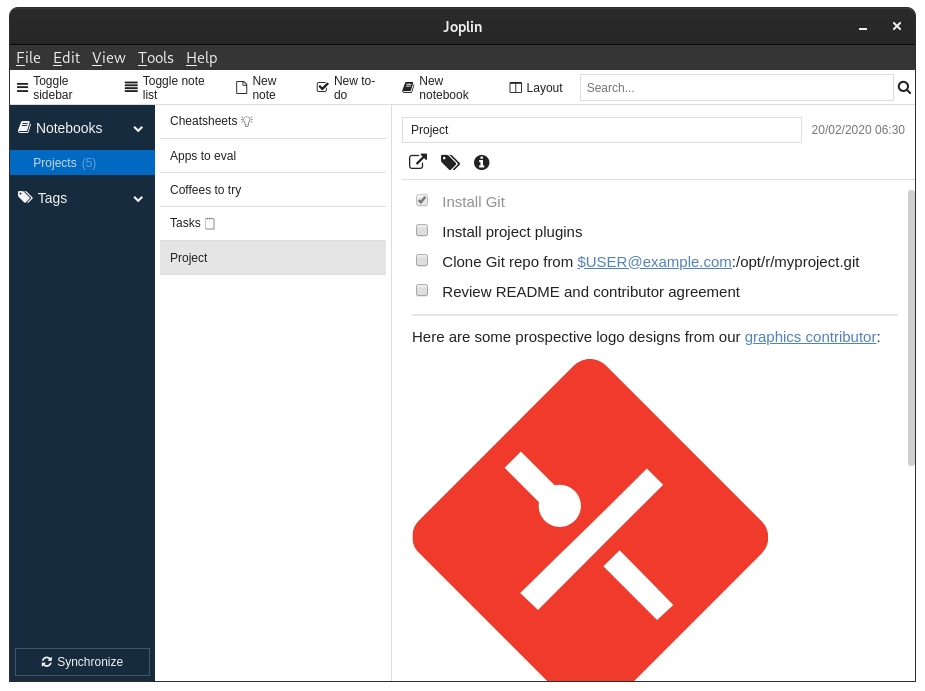 Turtl lets you organize your notes on boards (you can define any number of boards) and tag those notes so you can easily find them. You can also attach files—like images, PDFs, music files, and so on. You can treat your boards as pinboards, idea boards, notebooks, RPG game notepads, mind maps, or just a reliable place to store and find your stuff. It's a dynamic and flexible system, and it's all encrypted.

There's no built-in Evernote importer, but using an external tool like Evernote2turtl, can import your notes from Evernote or Google Keep into Turtl. 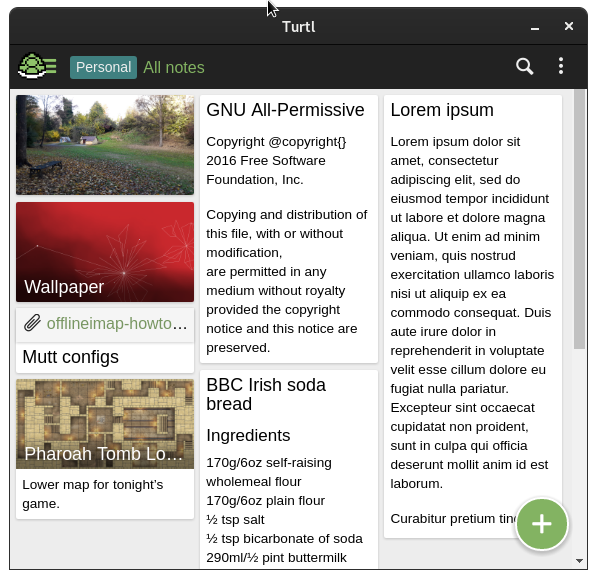 With Laverna, you can format your notes with Markdown (a lightweight markup language that uses keyboard symbols to denote formatting). Don't worry if you don't know Markdown. You can add formatting with a click using Laverna's toolbar.

Laverna doesn't have notebooks or tags, though its search engine does a pretty good job of finding notes. On top of that, you can embed images into your notes with a couple of clicks.

Unlike the other applications I talk about in this article, Laverna has desktop clients for Linux, Mac OS, and Windows which you can download from its website. There's also a no-cost hosted version that you can access with any web browser. 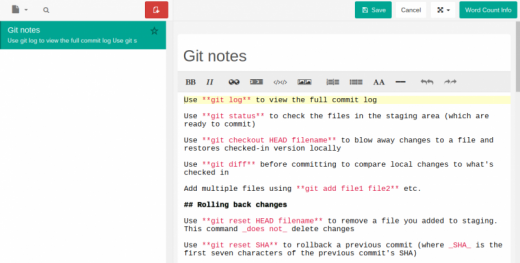 Permanote is simple. In fact, it's quite barebones. It's just you and your notes.

Permanote doesn't let you collect your notes in notebooks, but it has a very good search engine. You can use tags to organize and filter your notes. It seems messy, but it works.

Like Laverna, can format your notes in Permanote using Markdown. Permanote also lets you insert images into your notes. Do that by dragging and dropping or them on the note. Permanote is pretty basic, but it does its job quite effectively. 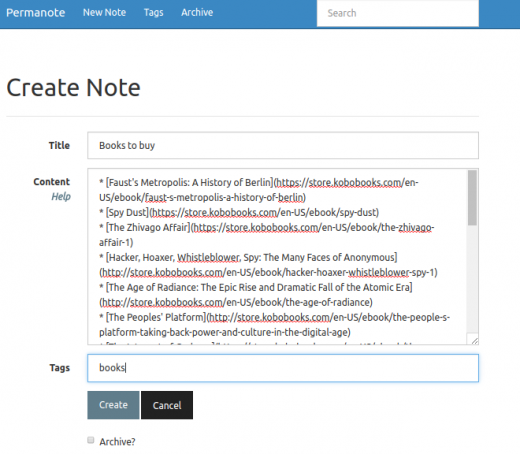 Brainstorm is more of an alternative to Google Keep than to Evernote. That said, it's a good choice if you want or need a simple way to take notes.

In Brainstorm, your notes are called boards. As you create a new board, Brainstorm offers a live preview of what you're writing. Brainstorm is quite spartan and, as you can see from the screen capture below, not all that visually appealing. It's not plain, though. You format your notes with Markdown. You can't attach images to a note, but you can point to one somewhere on the web.

Brainstorm doesn't let you save a note without adding one or more tags to it. It can be annoying at first, but does make sense. Why? Brainstorm doesn't offer you a way to organize your notes nor does it have a search function.

Getting and using these applications

Unlike Evernote, the four applications I discuss in this article (aside from Laverna) aren't hosted—there's no convenient link to follow to log in and use them. If you have your own server or a web hosting account and want to embrace your inner geek a bit, you can download and install each of these applications.

One of the easiest ways to use them is via Sandstorm Oasis, which describes itself as "an open source operating system for personal and private clouds." Installing these note taking tools only takes a couple of clicks, and you can access them from wherever you have an internet connection.

What's your favorite open source application for taking notes? Share your pick by leaving a comment below.

...or http://www.qownnotes.org/ as desktop client for ownCloud notes

Tagspaces is also a good alternative

Keepnote is the best of a sorry lot.

Are there any integrated alternatives for the Evernote Web Clipper? I want to capture web content into my note/organization tool.

Sadly, no. That would be a nice feature to have in these applications.

how about simplenote, i read good things about it, in linuxjournal

Simplenote itself isn't open source. Only the mobile and desktop clients are.

I second that! Leanote is a great app.
I do like mynotex as well.

Don't forget to make sure all these good alternatives show up on alternativeto.net! That's an important piece of infrastructure that should be maintained so we have a comprehensive view of our options. I see a lot of these alternatives on it, but not quite all. Doing my share now....

Thanks for sharing, but for years I used evernote a lot, and in linux I have to use NixNote as the client to sync with evernote server, but it can be a little unstable indeed.

Open data is more important, IMHO, than open source. Mainly because OSS means different things to different people. Windows is OSS to the Russian and Chinese governments, but they aren't free to modify the code. Really the GPL/LGPL/AGPL, MIT, Apache, BSD and Perl licenses are truly Open Source with GPL-varients having some heavy baggage. Without the BSD license, Apple wouldn't have OSX or iOS.

For desktop apps, check out Basket Note Pads http://basket.kde.org/ ~ more like OneNote, but you can shovel anything into it. It is amazing.

For something lite - look at GNote. Supports pages, lists, very simple formatting, because we can spend hours reformatting something when indentation and text matter much more.

For web apps, use any wiki you like. There are wikis like tiddlywiki http://tiddlywiki.com/ that are JS and a single HTML file - clone that on every device to refer to it using a local browser, but only edit it from one system. Put the files on a web server and view from any internet-connected device.

Lots of web tiny wiki programs exist. There are many, many, webapps that can be self-hosted: https://github.com/Kickball/awesome-selfhosted