Sysadmins have many tools to view and manage running processes. For me, these primarily used to be top, atop, and htop. A few years ago, I found Glances, a tool that displays information that none of my other favorites do. All of these tools monitor CPU and memory usage, and most of them list information about running processes (at the very least). However, Glances also monitors filesystem I/O, network I/O, and sensor readouts that can display CPU and other hardware temperatures as well as fan speeds and disk usage by hardware device and logical volume.

I mentioned Glances in my article 4 open source tools for Linux system monitoring, but I will delve into it more deeply in this article. If you read my previous article, some of this information may be familiar, but you should also find some new things here.

Glances is cross-platform because it is written in Python. It can be installed on Windows and other hosts with current versions of Python installed. Most Linux distributions (Fedora in my case) have Glances in their repositories. If not, or if you are using a different operating system (such as Windows), or you just want to get it right from the source, you can find instructions for downloading and installing it in Glances' GitHub repo.

I suggest running Glances on a test machine while you try the commands in this article. If you don't have a physical host available for testing, you can explore Glances on a virtual machine (VM), but you won't see the hardware sensors section; after all, a VM has no real hardware.

To start Glances on a Linux host, open a terminal session and enter the command glances.

Glances has three main sections—Summary, Process, and Alerts—as well as a sidebar. I'll explore them and other details for using Glances now.

In its top few lines, Glances' Summary section contains much of the same information as you'll find in other monitors' summary sections. If you have enough horizontal space in your terminal, Glances can show CPU usage with both a bar graph and a numeric indicator; otherwise it will show only the number.

I like Glances' Summary section better than the ones in other monitors (like top); I think it provides the right information in an easily understandable format. 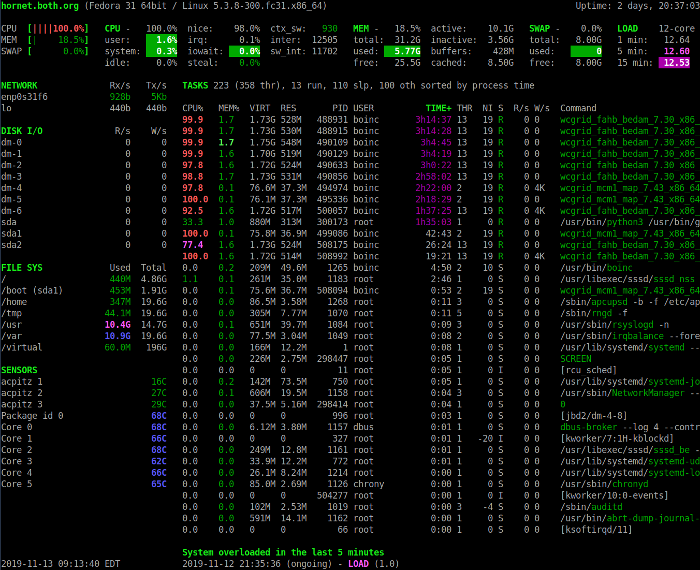 The Glances display on a busy Linux host. In the interest of clarity, not all possible displays are shown in the left sidebar.

The Summary section above provides an overview of the system's status. The first line shows the hostname, the Linux distribution, the kernel version, and the system uptime.

The next four lines display CPU, memory usage, swap, and load statistics. The left column displays the percentages of CPU, memory, and swap space that are in use. It also shows the combined statistics for all CPUs present in the system.

Press the 1 key to toggle between the consolidated CPU usage display and the display of the individual CPUs. The following image shows the Glances display with individual CPU statistics. 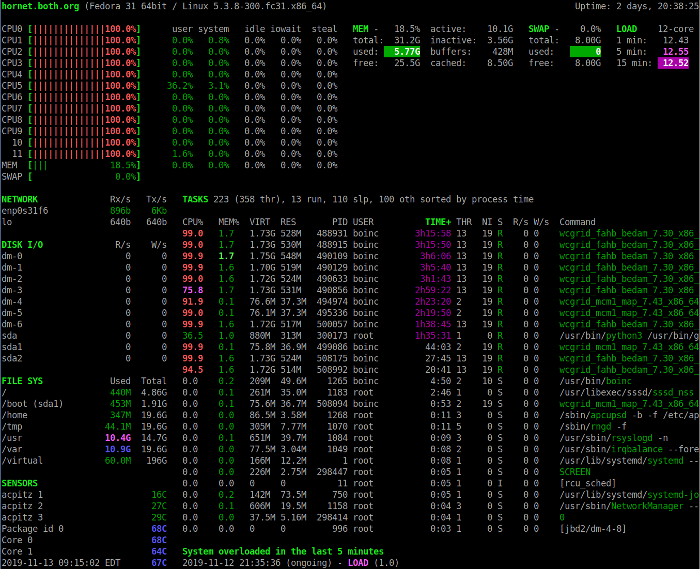 This view includes some additional CPU statistics. In either display mode, the descriptions of the CPU usage fields can help you interpret the data displayed in the CPU section. Notice that CPUs are numbered starting at 0 (Zero).

The Memory portion of the Summary section contains statistics about memory usage.

The Swap section is self-explanatory if you understand a bit about swap space and how it works. This shows how much total swap space is available, how much is used, and how much is left.

The Load part of the Summary section displays the one-, five-, and 15-minute load averages.

You can use the numeric keys 1, 3, 4, and 5 to alter your view of the data in this section. The 2 key toggles the left sidebar on and off.

Load averages are commonly misunderstood, even though they are a key criterion for measuring CPU usage. But what does it really mean when I say that the one- (or five- or 10-) minute load average is 4.04, for example? Load average can be considered a measure of demand for the CPU; it is a number that represents the average number of instructions waiting for CPU time, so it is a true measure of CPU performance.

The optimum load average condition is for the load average to equal the total number of CPUs in a system. That would mean that every CPU is fully utilized, and no instruction must be forced to wait. But reality is messy, and optimum conditions are seldom met. If a host were running at 100% utilization, this would not allow for spikes in CPU load requirements.

Linux Journal published an excellent article about load averages, the theory, the math behind them, and how to interpret them, in its December 1, 2006, issue. Unfortunately, Linux Journal has ceased publication, and its archives are no longer available directly, so the link is to a third-party archive.

One of the reasons for using a tool like Glances is to find processes that are taking up too much CPU time. Open a new terminal session (different from the one running Glances), and enter and start the following CPU-hogging Bash program.

This program is a CPU hog and will use up every available CPU cycle. Allow it to run while you finish this article and experiment with Glances. It will provide you with an idea of what a program that hogs CPU cycles looks like. Be sure to observe the effects on the load averages over time, as well as the cumulative time in the TIME+ column for this process.

The Process section displays standard information about each process that is running. Depending upon the viewing mode and the size of the terminal screen, different columns of information will be displayed for the running processes. The default mode with a wide-enough terminal displays the columns listed below. The columns that are displayed change automatically if the terminal screen is resized. The following columns are typically displayed for each process from left to right.

Glances usually determines the default sort column automatically. Processes can be sorted automatically (a), or by CPU (c), memory (m), name (p), user (u), I/O rate (i), or time (t). Processes are automatically sorted by the most-used resource. In the images above, the TIME+ column is highlighted.

Glances also shows warnings and critical alerts, including the time and duration of the event, at the bottom of the screen. This can be helpful when you're attempting to diagnose problems and cannot stare at the screen for hours at a time. These alert logs can be toggled on or off with the l (lower-case L) key, warnings can be cleared with the w key, while alerts and warnings can all be cleared with x.

Glances has a very nice sidebar on the left that displays information that is not available in top or htop. While atop displays some of this data, Glances is the only monitor that displays data about sensors. After all, sometimes it is nice to see the temperatures inside your computer.

The individual modules, disk, filesystem, network, and sensors can be toggled on and off using the d, f, n, and s keys, respectively. The entire sidebar can be toggled using 2. Docker stats can be displayed in the sidebar with D.

Note that hardware sensors are not displayed when Glances is running on a virtual machine.

You can get help by pressing the h key; dismiss the help page by pressing h again. The Help page is rather terse, but it does show the available interactive options and how to turn them on and off. The man page has terse explanations of the options that can be used when launching Glances.

You can press q or Esc to exit Glances.

The file /usr/local/share/doc/glances/README.rst contains additional useful information, including optional Python modules you can install to support some optional Glances features.

Glances provides command-line options that allow it to start up in specific viewing modes. For example, the command glances -2 starts the program with the left sidebar disabled.

By starting it in server mode, you can use Glances to monitor remote hosts:

You can then connect to the server from the client with:

There are also pluggable modules for Glances that provide measurement data not available in the base program.

Although Glances can monitor many aspects of a host, it cannot manage processes. It cannot change the nice number of a process nor kill one, as top and htop can. Glances is not an interactive tool. It is used strictly for monitoring. External tools like kill and renice can be used to manage processes.

Glances can only show the processes that are taking the majority of the resource specified, such as CPU time, in the available space. If there is room to list just 10 processes, that is all you will be able to see. Glances does not provide scrolling or reverse-sort options that would enable you to see any other than the top X processes.

The impact of measurement

The observer effect is a physics theory that states, "simply observing a situation or phenomenon necessarily changes that phenomenon." This is also true when measuring Linux system performance.

Merely using a monitoring tool alters the system's use of resources, including memory and CPU time. The top utility and most other monitors use perhaps 2% tor 3% of a system's CPU time. The Glances utility has much more impact than the others; it usually uses between 10% and 20% of CPU time, and I have seen it use as much as 40% of one CPU in a very large and active system with 32 CPUs. That is a lot, so consider its impact when you think about using Glances as your monitor.

My personal opinion is that this is a small price to pay when you need the capabilities of Glances.

Despite its lack of interactive capabilities, such as the ability to renice or kill processes, and its high CPU load, I find Glances to be a very useful tool. The complete Glances documentation is available on the internet, and the Glances man page has startup options and interactive command information.

Parts of this article are based on David Both's new book, Using and Administering Linux: Volume 2 – Zero to SysAdmin: Advanced Topics.

Information is the key to resolving any computer problem, including problems with or relating to Linux and the hardware on which it runs. There are many tools available for...

Have you ever noticed that light bulbs (the incandescent ones especially) seem to burn out most frequently at the instant they're turned on? Or that electronic components like...