The GNOME project is the Linux desktop's darling, and deservedly so. It began as the free and open desktop alternative to proprietary options (including KDE at the time), and it's been going strong ever since. GNOME took GTK+, developed by the GIMP project, and ran with it, developing it into a robust, all-purpose GTK framework. The project has pioneered the user interface, challenging preconceptions of what a desktop "should" look like and offering users new paradigms and options.

GNOME is widely available as the default desktop on most of the major modern Linux distributions, including RHEL, Fedora, Debian, and Ubuntu. If your distribution doesn't offer a version of it, you can probably install GNOME from your software repository. Before you do, though, be aware that it is meant to provide a full desktop experience, so many GNOME apps are installed along with the desktop. If you're already running a different desktop, you may find yourself with redundant applications (two PDF readers, two media players, two file managers, and so on). If you just want to try the GNOME desktop, consider installing a GNOME distribution in a virtual machine, such as GNOME Boxes.

The GNOME desktop is clean, with a simple taskbar along the top and the bare minimum of items in a system tray in the right corner. There are no desktop icons on GNOME, and that's by design. If you're one of those users who stores everything on your desktop, you probably recognize that your desktop gets badly disorganized on a regular basis, and—worse still—it's permanently hidden from view because your applications are covering it up.

GNOME solves both problems: there is no desktop (functionally), and new virtual workspaces are generated dynamically, so you can run your applications in full-screen mode. It can take some getting used to if you usually clutter up your screen, but in practice, it's an improved workflow in every sense. You learn to keep your assets organized (or you leave them scattered in your home directory), and you can switch between screens just as quickly as you do on your mobile phone.

Of course, not all applications are designed to run in full-screen mode, so if you prefer to click through windows, you can do that, too. 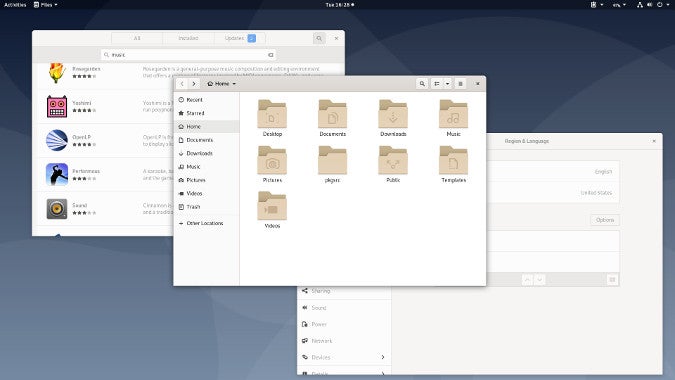 The GNOME philosophy extols canonical solutions to common tasks. You don't often find eight different ways to accomplish the same thing in GNOME. You find one or two official ways to accomplish a task, and once you've learned those ways, that's all you have to remember. It's refreshingly simple, but because it's running on Linux, it's also technically flexible (after all, you don't have to use GNOME applications just because you're running a GNOME desktop).

To access the application menu, called Activities, click in the upper-left corner of the desktop. This menu takes over your entire screen to reveal a dock along the left edge of the screen with common applications and an icon to browse your apps in a grid. You can launch applications by browsing through what you have installed or by typing the first few letters of the software name to bring up a filtered list of what's available. 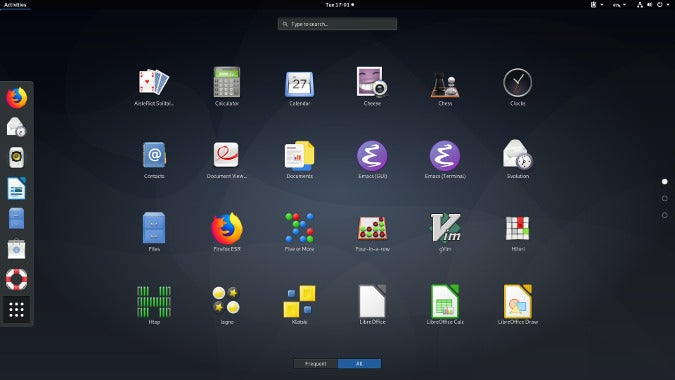 The GNOME project is going strong, and it's left several exciting projects (like MATE and Cinnamon) in its wake. It's popular, it's comfortable, and it's the face of the Linux desktop.

Exploring different desktops is a good thing. I’ve recently converted to GNOME 3 ("hallowed be its Name in all the earth, etc.") and I admit freely to enjoying it (a lot).I…

GNOME at 20: Four reasons it's still my favorite GUI

In the 20 years since its initial release, GNOME has continued to innovate and improve.

How to use GNOME Boxes' snapshot capability

GNOME Boxes' snapshot capability preserves data in case you need to revert your virtual machine to a previous state.