This article is part of a special series of 24 days of Linux desktops. If you think there's no such thing as too much opportunity to customize your desktop, KDE Plasma may be for you.

The Plasma desktop by the KDE community is a pinnacle among open source desktops. KDE got into the Linux desktop market early, but since its foundational Qt toolkit did not have a fully open license at the time, the GNOME desktop was created. Since then, Qt has become open source, and KDE (and its derivatives, like the Trinity desktop) has thrived.

You may find the KDE desktop in your distribution's software repository, or you can download and install a distribution that ships KDE as its default. Before you install, be aware that KDE provides a full, integrated, and robust desktop experience, so several KDE applications are installed along with it. If you're already running a different desktop, you will find yourself with redundant applications (two PDF readers, several media players, two or more file managers, and so on). If you just want to try the KDE desktop without committing to it, you can install a KDE-based distribution in a virtual machine, such as GNOME Boxes, or you can try a bootable OS like Porteus.

The KDE Plasma desktop is relatively boring at first glance—but in a comforting way. It's got the industry-standard layout: pop-up application menu in the bottom-left corner, taskbar in the middle, system tray on the right. It's exactly what you'd expect from a standard household or business computer. 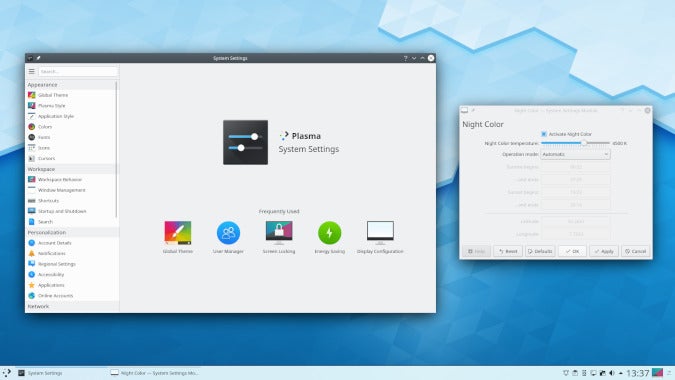 What sets KDE apart, though, is that you can change nearly anything you want. The Qt toolkit can be taken apart and rearranged in some surprising ways, meaning you can essentially design your own desktop using KDE's parts as your foundation. The settings available for how your desktop behaves are vast, too. KDE can act as a standard desktop, a tiling window manager, and anything in between. You can create your own window rules by window class, role, type, title, or any combination thereof, so if you want specific applications to behave differently than everything else, you can create an exception to global settings.

Furthermore, there's a rich collection of widgets to enable you to customize the way you interface with your desktop. There's a GNOME-like full-screen application launcher, a Unity-like dock launcher and icons-only taskbar, and a traditional taskbar. You can create and place panels on any edge of the screen you want. 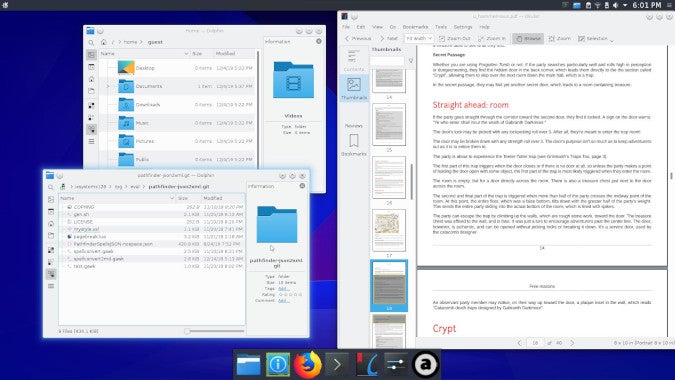 There's so much customization, in fact, that one of the most common critiques of KDE is that it's too customizable, so keep in mind that customization is optional. You can use the Plasma desktop in its default configuration, and change things gradually and only as you feel necessary. What matters most about Plasma desktop configuration options isn't their number, but that they're discoverable and intuitive, either in the System Settings application or with a right-click.

The fact is, on KDE, there's almost never just one way to accomplish any given task, and its users see that as its greatest strength. There's no implied workflow in KDE, only a default. And all defaults can be changed, until everything you need to do with your desktop is second-nature.

The KDE community prides itself on consistency and integration, made possible through great developer and community management and the KDE libraries. The developers of KDE aren't just developers of a desktop. They provide a stunning collection of applications, each of them created with KDE libs that extend and standardize common Qt widgets. It's no accident that after using KDE for a few months, whether you open DigiKam for photo management or Kmail to check email or KTorrent to grab the latest ISO or Dolphin to manage files, your muscle memory takes you where you need to go in the UI before you consciously think about it. 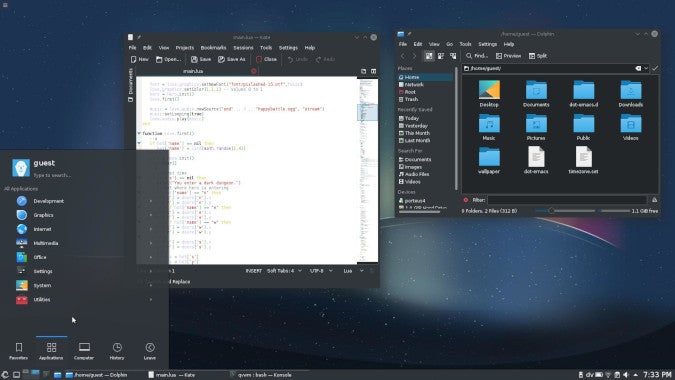 KDE has something for everyone. Use its default settings for a smooth, plain-vanilla desktop experience, or customize it to make it your own. It's a stable, attractive, and robust desktop environment that probably has everything you need for whatever you want to do on Linux.

I really like the command line interface (CLI) in Linux. It bestows great power upon its users, and I spend a good deal of time availing myself of those powers. And yet…