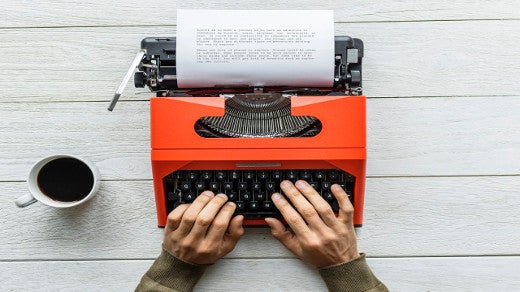 The great thing about computers is that they’re really good at multi-tasking.

The bad thing about computers is that they’re really good at multi-tasking.

Whether you consider yourself, as a human, good or bad at multi-tasking, sometimes you need a little help focusing. One of those times is when you’re trying to compose clear and concise communication. And that’s exactly why Focuswriter was developed.

On Linux, you can install Focuswriter as a Flatpak from Flathub.

On Windows or Linux (if you don’t use Flatpak), you can install Focuswriter from its website. You can also install from source code, also available from the Focuswriter webpage.

Focuswriter is, admittedly, actually a cross between a text editor and a word processor. Its default format is the Open Document Text (.odt) format, so it allows you to style and align text, mark headers, and toggle smart quotes on and off. But that’s where its word processor features end because Focuswriter does mostly focus on writing, not on styling what you’ve written.

Focuswriter doesn’t look like your usual computer application, much less your usual text editor. When it launches, it loads a theme behind your document. The theme is generally benign—a writing desk is the default, but there’s also a starry sky, a faraway landscape, and so on. You’re not meant to become preoccupied with the theme, of course, but it does help you from getting distracted by some other application window or your computer desktop lingering behind your editor. Because it’s easy to customize, there’s little chance of you being left without a theme you like. 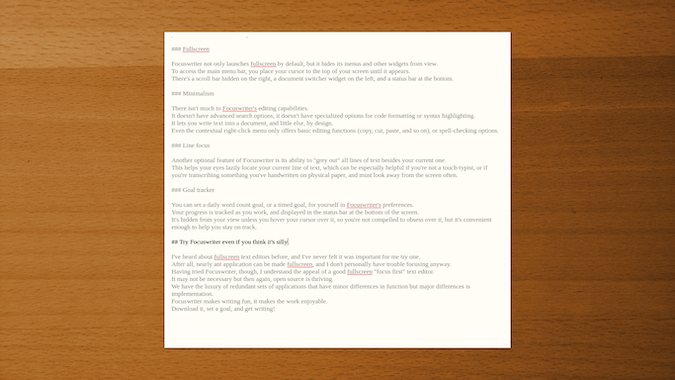 Focuswriter is actually fun to use. Aside from its visual theme, it also has an optional typewriter audio theme. Once enabled, every keypress makes the sound of a mechanical typewriter key. When you press Return, the satisfying sound of a carriage return is your reward for completing a paragraph (or a line, if you write one sentence per line to improve version control).

This audio theme is entirely opt-in, and it’s not on by default. You may doubt its efficacy, but you shouldn’t underestimate the satisfaction of making those sounds of productivity while also wielding the powers of modern text editing.

Focuswriter not only launches fullscreen by default, but it also hides its menus and other widgets from view. To access the main menu bar, you place your cursor to the top of your screen until it appears. There’s a scroll bar hidden on the right, a document switcher widget on the left, and a status bar at the bottom.

There isn’t much to Focuswriter’s editing capabilities. It doesn’t have advanced search options or specialized options for code formatting or syntax highlighting. It lets you write text, and little else, into a document, by design. Even the contextual right-click menu only offers basic editing functions (copy, cut, paste, and so on) or spell-checking options.

Another optional feature of Focuswriter is its ability to "grey out" all lines of text but your current one. This helps your eyes lazily locate your current line of text, which can be especially helpful if you’re not a touch-typist or if you’re transcribing something you’ve handwritten on physical paper and must look away from the screen often.

You can set a daily word count goal or a timed goal for yourself in Focuswriter’s preferences. Your progress is tracked as you work and displayed in the status bar at the bottom of the screen. It’s hidden from your view unless you hover your cursor over it, so you’re not compelled to obsess over it, but it’s convenient enough to help you stay on track.

Try Focuswriter (even if you think it’s silly)

I’ve heard about fullscreen text editors before, and I’ve never felt it was important for me to try one. After all, nearly any application can be made fullscreen, and I don’t personally have trouble focusing anyway.

Having tried Focuswriter, though, I understand the appeal of a good fullscreen "focus first" text editor. It may not be necessary, but then again, open source is thriving. We have the luxury of redundant sets of applications that have minor differences in function but major differences in implementation. Focuswriter makes writing fun; it makes the work enjoyable. Download it, set a goal, and get writing!

Explore the exciting features of the Howl text editor

Howl is a general-purpose text editor with a super-efficient workflow and plenty of features to keep it fun and interesting.

This editor may be reminiscent of Vim, but it offers plenty of its own unique functions and features.

Find out how your text will be read with Norka

This is a no-frills text editor designed to provide insight into how your writing will be read and understood.