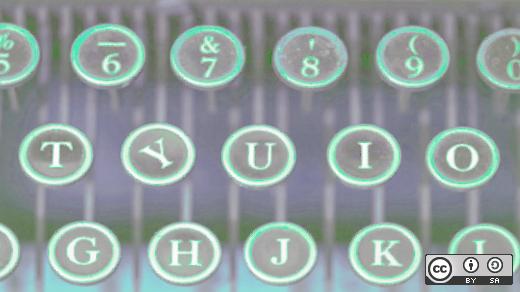 The Kakoune text editor takes inspiration from Vi. With a minimalistic interface, short keyboard shortcuts, and separate editing and insert modes, it does look and feel a lot like Vi at first. However, the Kakoune editor has its own unique style both in design and function and is better considered its own editor rather than yet another Vim.

On Linux and BSD, you can install Kakoune from your distribution’s software repository or ports tree. For example, on Fedora, CentOS, or RHEL:

On Debian, Ubuntu, or similar:

On macOS, you can use Homebrew:

Alternatively, you can build it from source code.

When you launch Kakoune (without a file name), it opens a mostly empty buffer in your terminal, except for a small status bar at the bottom of the windows. Like Vim, Kakoune starts in "normal" mode, which accepts key presses as commands and does not enter text into the buffer. To enter insert mode, you must press either i (for insert) or a (for append).

In normal mode, you can issue navigation and text editing commands. This is the most obvious borrowed feature from the Vi tradition. Editing commands include functions to copy, cut (or "yank," in traditional Unix editing vernacular), and paste words and lines, undo, transform characters to upper or lower case, and so on. Here are some of the basics:

The easiest way to extend a selection from a single character is to enter normal mode and press the Shift key while moving your cursor with the arrow keys. There are, however, several methods of extending a selection based on certain criteria. For instance, Alt+l extends a selection region from your cursor to the end of the current line.

Full documentation is available at https://github.com/mawww/kakoune/blob/master/README.asciidoc.

In addition to these basic interactions, you can also issue commands to invoke the built-in functions of Kakoune. To access the Kakoune’s command line, type : in normal mode. From the command line, you can issue commands, including the essential edit command to open a file, the write command to save your buffer to a file, and of course, quit to exit the application.

There are many more functions, including special options for specific programming languages and file formats, an option to use the Ranger file navigator to browse your file system, change your color theme, search and replace text, and much more. 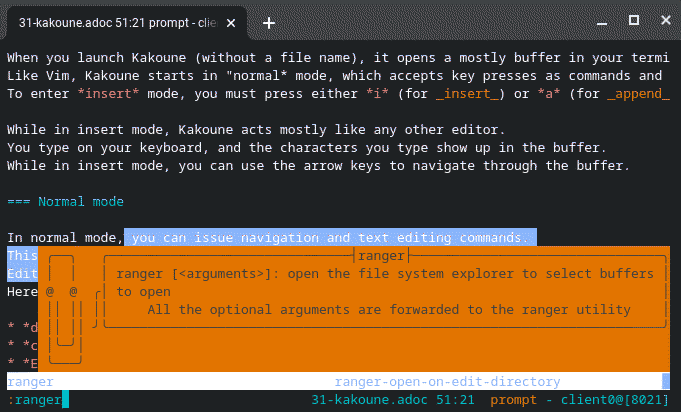 If you’re an experienced Vim user or even someone with just a passing competency, you might find Kakoune disorienting at first. It’s just similar enough to Vim to lull you into a false sense of familiarity—everything works exactly like Vim until it’s drastically different. However, if you’re new to Vim-like editors, or you’re a Vim user looking for a new challenge, then Kakoune could be an ideal editor for you.

Try it for yourself!

When I started using the vi text editor, I hated it. I thought it was the most painful and counter-intuitive editor ever designed. But I'd decided I had to learn the thing...