The X11 graphic server, distributed by X.org, has a few token applications that show how to program with its provided tools. These range from the TWM desktop to the silly but hypnotic Xeyes. It also includes a text editor called Xedit, a seemingly simple application with enough hidden features to make it a serious editor.

If you're on Linux or BSD, you can install Xedit from your distribution's software repository or ports tree. It sometimes appears in a package called X11-apps bundled with other X11 apps.

On macOS, you can install XQuartz, which provides Xedit, Xeyes, and a few other small applications (along with an X11 graphics server).

You can launch Xedit from your application menu, if it's listed. Some distributions treat it more as a command than a GUI app, even though it is definitely a GUI app, so it may not be listed in your application menu. In that case, you can launch Xedit from the terminal. If you type xedit & to launch the application, it launches an empty Xedit editor ready for text. If you enter the launch command along with an existing file's name, Xedit starts with the file loaded into its buffer: 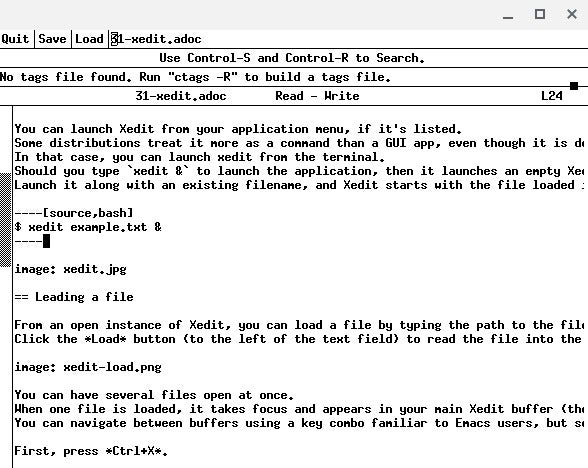 From an open Xedit instance, you can load a file by typing the file's path in the top text field. Click the Load button (to the left of the text field) to read the file into the Xedit window.

You can have several files open at once. When one file is loaded, it takes focus and appears in your main Xedit buffer (the big text field in the main window) and shuffles any existing file into a hidden buffer.

You can navigate between buffers using a key combo familiar to Emacs users but sometimes confusing to others: First, press Ctrl+X. Release those keys, and then press Ctrl+B.

It feels strange at first to perform actions that require two keyboard shortcuts in a row, but after a while, you get used to it. In fact, as a frequent Emacs user, I find the compound key combinations comfortingly rhythmic. I was surprised and pleased to find that some of my favorite shortcuts were valid in Xedit.

It turns out that Xedit borrows keyboard shortcuts from several sources of inspiration. If you're an Emacs user, you'll find that the most common combinations are valid in Xedit. For instance, C-x C-f (that's Ctrl+X followed Ctrl+F) takes you to the top text field to load a file, and C-x C-s (Ctrl+X followed by Ctrl+S) saves a file. Surprisingly, C-x 3 even splits the window vertically, while C-x 2 splits it horizontally, and C-x 0 or 1 removes the split.

There are many more, and they're listed on the Xedit man page.

Xedit also includes a line editor, similar to ex, which ought to be familiar to Vi and ed or even sed users. To enter line-editing mode, press the Esc key. This places you in the top text field but in a command mode. Edit commands use the syntax: line number followed by a command and parameters.

Say you have this text file:

You decide you want to change ed to Xedit in line 1. In Xedit, move to line 1, press Esc, and then type .,s/ed/Xedit/.

Without moving your cursor to the next line, you could change two to the second: Press Esc and then type 2,s/two/the second/.

Xedit isn't much to look at. It's simple, it has no menus to speak of, but it borrows some popular conveniences from some of the best Unix editors. The next time you're looking for a new editor, try Xedit.