How to resolve a git merge conflict

What do you do when developers change the same line of code in different ways?

Git is the standard source code repository manager for open source projects and many closed source projects. This article shows new Git users how to do something slightly advanced but fundamental to its purpose: resolving a git-merge conflict.

What is a git merge?

All modern source-control systems have an essential feature: the ability for multiple developers to work on the same project, at the same time, without interfering with each other. Git implements this feature by allowing multiple developers to work on a branch locally, then push their code to a central place. Then, others can pull the code back to their local copy and continue their own work with their collaborators' changes in place.

What is a merge conflict?

In every situation where work can be parallelized, work will eventually overlap. Sometimes two developers will change the same line of code in two different ways; in such a case, Git can't tell which version is correct—that's something only a developer can decide.

If this happens, a developer will see the following error during a git merge:

Resolving merge conflicts can take a minute or they can take days (if there are a lot of files that need to be fixed). It's recommended, and good coding practice, to sync your code multiple times a day by committing, pushing, pulling, and merging often.

How do you resolve a git merge conflict?

Git gives a clue to resolving conflicts in its error message. It says Merge conflict in [filename1], so you know there is a problem with that file. Then it says fix conflicts and then commit the result, so if you follow directions, edit the file, then commit it, everything should work fine. Let's see this in action.

Create a new Git repo, add a file, make a branch, make some conflicting edits, and see what it looks like.

Start with an empty directory and run git init:

Now create a README file and commit the changes:

On the new branch:

Return to the master branch, edit the README on line 3 with something different, and commit that.

Change to the master branch:

Merge the branch into master to see the error:

Now, go into the README file, as Git asks, to see what it looks like:

As you can see, Git added some syntax including seven "less than" characters, <<<<<<< and seven "greater than" characters, >>>>>>>, separated by seven equal signs, =======. These can be searched using your editor to quickly find where edits need to be made.

That there are two sections within this block:

As a developer, you decide what stays and what goes. Make your edits as necessary, then close the file:

As you can see, this keeps the branch's edits. You can run git status to see further instructions:

Follow the directions to add the file and then commit:

Merge conflicts are going to happen on teams of any size, given enough time. It's important to be able to resolve them with a clear head. As a developer, I've been quite overwhelmed staring at a 10+ file merge-conflict problem. Understanding what you are looking at when you get a merge conflict goes a long way.

I didn't cover merge conflicts in the context of an integrated development environment. Knowing how to use the Git command-line tool, including fixing merge conflicts, is indispensable to understanding Git and being able to work on Git in any environment.

Git's website and documentation are good resources if you get stuck. You can find advanced information on Git merging, including merge-conflict resolution, in the advanced merging section of the Git Pro book. 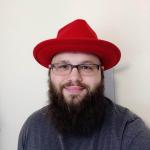 My name is Brian Breniser. I'm a consultant at Red Hat working on the West coast of the USA. My specialty is software development, Agile, CI/CD, and I love all things open source!
More about me