Last fall, I took on a new role with a team that relies on Kubernetes (K8s) as part of its core infrastructure. While I have worked with a variety of container orchestrators in my time (e.g., Kubernetes, Apache Mesos, Amazon ECS), the job change sent me back to the basics. Here is my take on the fundamentals you should be familiar with if you're working with Kubernetes.

Container orchestration refers to the tools and platforms used to automate, manage, and schedule workloads defined by individual containers. There are many players in this space, both open source and proprietary, including Hashicorp's Nomad, Apache Mesos, Amazon's ECS, and let's not forget Google's home-grown Borg project (from which Kubernetes evolved). There are pros and cons with each technology, but Kubernetes' rising popularity and strong community support make it clear that Kubernetes is currently the king of the container orchestrators.

Breaking down Kubernetes into building blocks

The simplest way to break down Kubernetes is by looking at the core concepts of container orchestrators. There are containers, which serve as

More on Kubernetes
foundational building blocks of work, and then there are the components built on top of each other to tie the system together.

In Kubernetes lingo, these roles are fulfilled by the worker nodes and the control plane that manages the work (i.e., Kubernetes components).

Kubernetes worker nodes have a nested layer of components. At the base layer is the container itself. 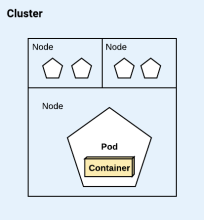 Technically, containers run in pods, which are the atomic object type within a Kubernetes cluster. Here's how they relate:

Each node runs an agent known as the kublet for running containers in a pod and a kube-proxy for managing network rules.

The worker nodes manage the containers, and the Kubernetes control plane makes global decisions about the cluster. 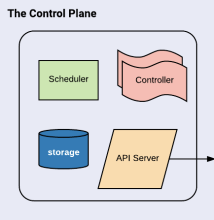 The control plane makes decisions to ensure regular operation of the cluster and abstracts away these decisions so that the developer doesn't have to worry about them. Its functionality is highly complex, and users of the system need to have awareness of the logical constraints of the control plane without getting too bogged down on the details.

The components of the cluster dictate how the cluster manages itself—but how do developers or (human) operators tell the cluster how to run the software? This is where controllers and templates come in.

Controllers orchestrate the pods, and K8s has different types of controllers for different use cases. But the key ones are Jobs, for one-off jobs that run to completion, and ReplicaSets, for running a specified set of identical pods that provide a service.

Like everything else in Kubernetes, these concepts form the building blocks of more complex systems that allow developers to run resilient services. Instead of using ReplicaSets directly, you're encouraged to use Deployments instead. Deployments manage ReplicaSets on behalf of the user and allow for rolling updates. Kubernetes Deployments ensure that only some pods are down while they're being updated, thereby allowing for zero-downtime deploys. Likewise, CronJobs manage Jobs and are used for running scheduled and repeated processes. The many layers of K8s allow for better customization, but CronJobs and Deployments suffice for most use cases.

Once you know which controller to pick to run your service, you'll need to configure it with templating.

Anatomy of the template

The Kubernetes template is a YAML file that defines the parameters by which the containers run. Much like any kind of configuration as code, it has its own specific format and requirements that can be a lot to learn. Thankfully, the information you need to provide is the same as if you were running your code against any container orchestrator: 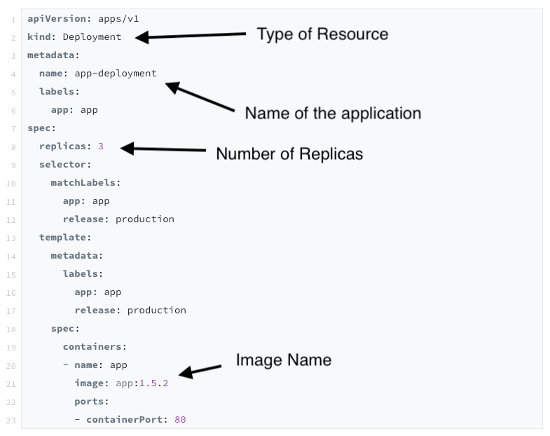 Flexibility in configuration is one of the many advantages of Kubernetes. With the different resources and templates, you can also provide the cluster information about:

Bringing it all together 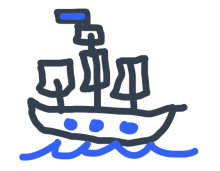 Combining templates from different resources allows the user to interoperate the components within Kubernetes and customize them for their own needs.

In a bigger ecosystem, developers leverage Jobs, Services, and Deployments with ConfigMaps and Secrets that combine to make an application—all of which need to be carefully orchestrated during deployment.

Managing these coordinated steps can be done manually or with one of the common package-management options. While it's definitely possible to roll your own deployment against the Kubernetes API, it's often a good idea to package your configuration—especially if you're shipping open source software that might be deployed and managed by someone not directly on your team.

The package manager of choice for Kubernetes is Helm. It doesn't take a lot to get started with Helm, and it allows you to package your own software for easy installation on a Kubernetes cluster.

The many layers and extensions sitting on top of containers can make container orchestrators difficult to understand. But it's actually all very elegant once you've broken down the pieces and see how they interact. Much like a real orchestra, you develop an appreciation for each individual instrument and watch the harmony come together.

Knowing the fundamentals allows you to recognize and apply patterns and pivot from one container orchestrator to another.

If you're interviewing people for Kubernetes-related roles, here's what to ask and why it matters.
Jessica Cherry (Correspondent)

Jiaqi Liu - Jiaqi is a Lead Software Engineer at University of Chicago's Center for Translational Data Science. Her past experience include being a Tech Lead at Button, an mobile e-Commerce startup in NYC and a Data Scientist at Capital One. Outside of work, Jiaqi is a leader in the Women Who Code and Write/Speak/Code communities.
More about me