If you are allowed to choose which programming language to use for an application, you usually pick one you know and that offers the shortest path to your goal. If you require a high runtime speed, programming languages that compile directly to machine code— like C++—are your best option.

In modern applications, the back and forth of memory addresses, jumps, loops, and the (sometimes unnecessary) copying of data areas consumes a huge share of machine code. In this article, I'll highlight the C++ move semantics, which enable you to avoid unnecessarily copying processes. Even if you are not a programmer, you can still analyze memory allocations with the valgrind heap profiler massif.

In C++ programming you have to deal with lvalues and rvalues. In the example below, a is on the left side of the assignment operator = so it is an lvalue. The assigned value of 5 is on the right side, so it is the rvalue.

Programming and development
When this line is compiled, the lvalue is interpreted as a symbolic address which can be altered afterwards. The rvalue is a pure hardcoded value. It cannot be accessed by subsequent code because rvalues don’t have an address. If you can determine an expression’s address or, if the compiler allows it, it is an lvalue. That is, if an expression survives the semicolon at the end of a line, it is an lvalue; otherwise, it’s an rvalue.

An lvalue can be present on the left and right side. An rvalue only in the right side.

Since C++11, the move semantic and the possibility to deal with rvalue references found its way into the standard.
Rvalue references are marked with a double ampersand &&. They allows to interpret an lvalue as a rvalue. Especially when creating objects, the use of rvalue references can increase performance, as we will see in the example code.

There are a lot of articles in the web which cover the syntax and the correct usage. The Chromium Project Documentation offers a good introduction to the subject. In this article we will use an example to reveal the actual impact on performance.

Imagine you have a class called MyObject that takes another class, MyType, as an argument in its constructor. In order to create an instance of MyObject, an instance of MyType has to be created in advance.

You can try it yourself: change the directory and invoke make:

After it compiles, invoke the sample program:

You should now see trace messages of the different constructor types:

Clean the binaries, invoke make with different arguments, and run the program again:

This time, the constructors' trace messages look a bit different:

Instead of invoking the MyType copy constructor, it calls the move constructor, and the MyType destructor is called only once. As you will see below, this has a positive impact on the runtime performance.

Look at main.cpp line 23 in the code. It shows that object_2 is directly created with the argument that should have been passed to the constructor of MyType:

What happened? Open main.cpp and move to line 27:

This forces using the move constructor to initialize object_3 (line 30) by using std::move when passing type_3 as an argument.

After moving type_3 into object_3, you cannot refer to type_3 (because you moved it). The object is destroyed and cannot be used again.

You may have noticed that the execution time is displayed in the output. While you won't see any effect on a single invocation (like in the examples above), there is a noticeable improvement when you run your code in an infinite loop.

Without a move constructor:

On my system, execution takes an average of 170ms:

With a move constructor:

This time, it takes an average of 143ms to execute:

This (constructed) example achieves a 16% reduction in runtime. Note that compiler optimizations are switched off (-O0). With a higher degree of optimization (-O3), runtime reduction would be less significant (11%).

The first choice for analyzing memory allocations on Linux-based systems is the tool valgrind, or to be precise, the heap profiler massif. In this case, executing the copy constructor causes heap memory allocations.

Run massif on the first example:

This outputs a file called massif.out with a trailing process ID. This file can be read with ms_print:

It prints out a graph of memory allocation over time: 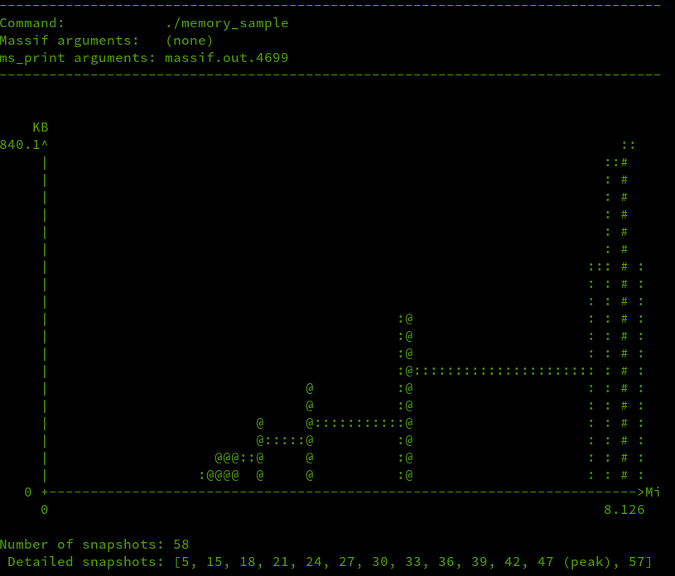 This graph shows increasing memory allocation over time. This is consistent with the implementation. The ouput of ms_print also includes information about which lines of code caused the memory allocation. I won't go into detail on how to read the output because there is excellent documentation available.

Regardless of the programming language you use, reducing copy operations (which results in heap memory allocations in this example) is a good way to increase runtime execution speed for performance-critical applications. When using C++, you will need a couple of prerequisites to apply these optimizations:

On a modern x86-64 CPU, heap memory allocations are so fast you won't notice whether an application is optimized or not without precise measurement. The less powerful your CPU, the more it makes sense to optimize runtime code. For example, on mobile devices, not only can it improve the response behavior, but it can also extend battery life.

Constructors are powerful components of programming. Use them to unlock the full potential of Java.
Seth Kenlon (Red Hat)

Our new cheat sheet puts all the essentials of C syntax on an easy-to-read handout.
Seth Kenlon (Red Hat)

Automatically perform a set of actions on multiple files with for loops and find commands.
Seth Kenlon (Red Hat)

Stephan Avenwedde - Stephan is a technology enthusiast who appreciates open source for the deep insight of how things work. Stephan works as a full time support engineer in the mostly proprietary area of industrial automation software. If possible, he works on his Python-based open source projects, writing articles, or driving motorbike.
More about me