More Linux resources
You may prefer vinyl and cassette tapes or VHS and Laserdisc, but it's still most likely that you consume the majority of the media you enjoy on a digital device. There's a convenience to media on a computer that can't be matched, largely because most of us are near a computer for most of the day. Many modern computer users don't give much thought to what applications are available for listening to music and watching movies because most operating systems provide a media player by default or because they subscribe to a streaming service and don't keep media files around themselves. But if your tastes go beyond the usual hit list of popular music and shows, or if you work with media for fun or profit, then you have local files you want to play. You probably also have opinions about the available user interfaces. On Linux, choice is a mandate, and so your options for media playback are endless.

Here are five of my must-have media players on Linux. 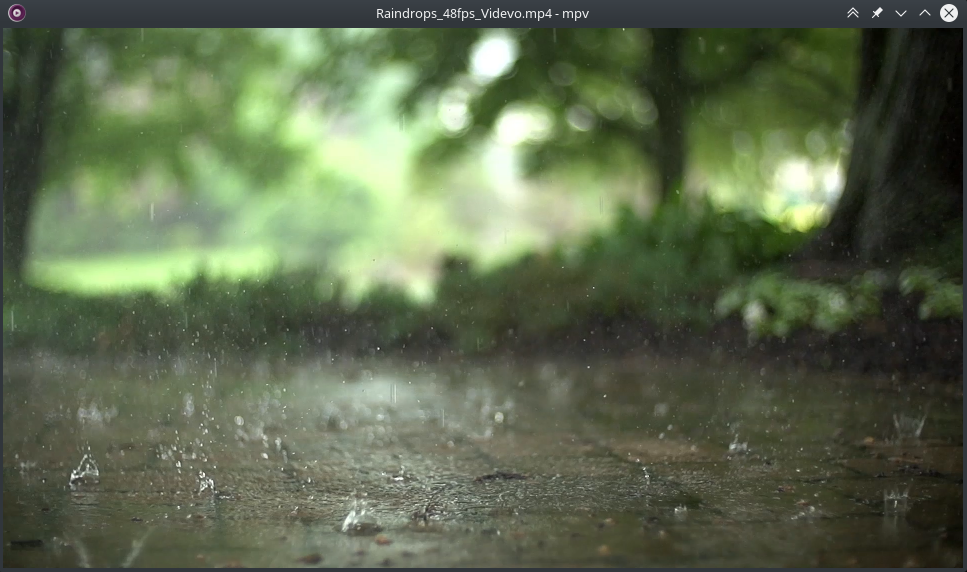 A modern, clean, and minimal media player. Thanks to its Mplayer, ffmpeg, and libmpv backends, it can play any kind of media you're likely to throw at it. And I do mean "throw at it" because the quickest and easiest way to start a file playing is just to drag the file onto the mpv window. Should you drag more than one file, mpv creates a playlist for you.

While it provides intuitive overlay controls when you mouse over it, the interface is best when operated through the keyboard. For instance, Alt+1 causes your mpv window to become full-size, and Alt+0 reduces it to half-size. You can use the , and . keys to step through the video frame by frame, the [ and ] keys to adjust playback speed, / and * to adjust volume, m to mute, and so on. These master controls make for quick adjustments, and once you learn them, you can adjust playback almost as quickly as the thought occurs to you to do so. For both work and entertainment, mpv is my top choice for media playback. 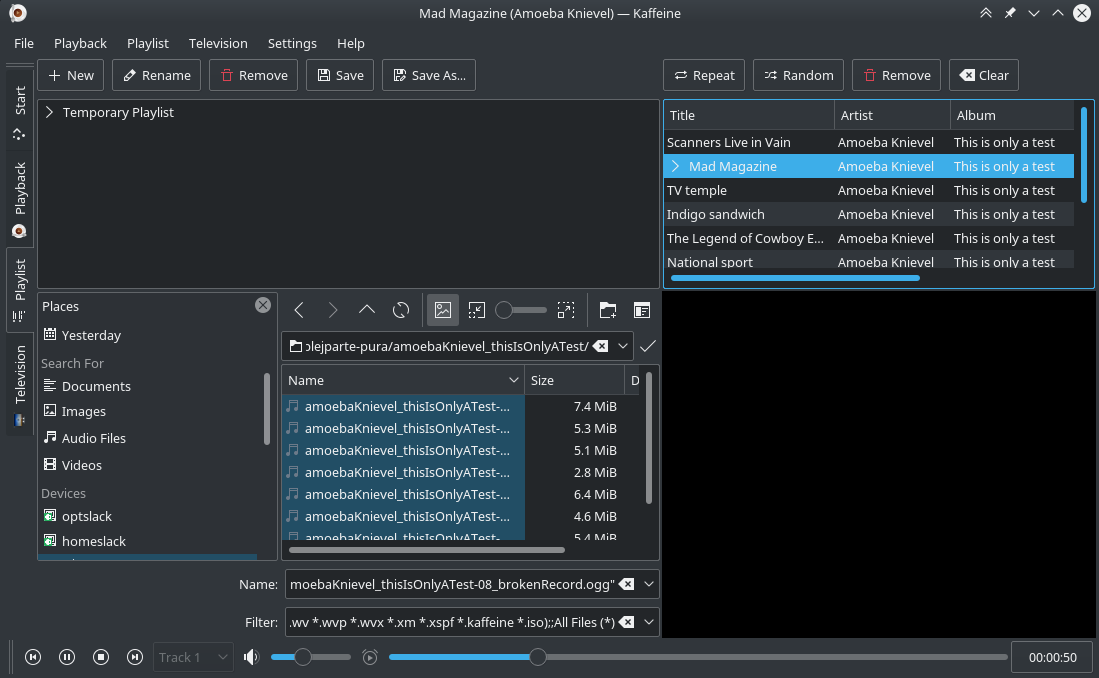 Both the KDE Plasma and GNOME desktops provide music applications that can act as frontends to your personal music library. They invite you to establish a standard location for your music files and then scan through your music collection so you can browse according to album, artist, and so on. Both are great for those times when you just can't quite decide what you want to listen to and want an easy way to rummage through what's available.

Kaffeine is actually much more than just a music player. It can play video files, DVDs, CDs, and even digital TV (assuming you have an incoming signal). I've gone whole days without closing Kaffeine, because no matter whether I'm in the mood for music or movies, Kaffeine makes it easy to start something playing. 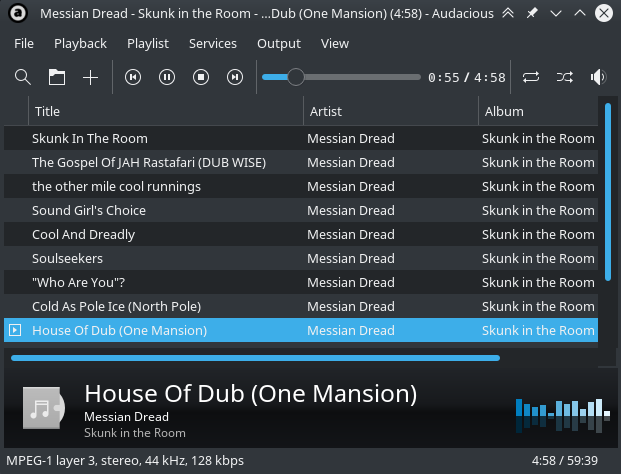 The Audacious media player is a lightweight application that can play your music files (even MIDI files) or stream music from the Internet. Its main appeal, for me, is its modular architecture, which encourages the development of plugins. These plugins enable playback of nearly every audio media format you can think of, adjust the sound with a graphic equalizer, apply effects, and even reskin the entire application to change its interface.

It's hard to think of Audacious as just one application because it's so easy to make it into the application you want it to be. Whether you're a fan of XMMS on Linux, WinAmp on Windows, or any number of alternatives, you can probably approximate them with Audacious. Audacious also provides a terminal command, audtool, so you can control a running instance of Audacious from the command line, so it even approximates a terminal media player! 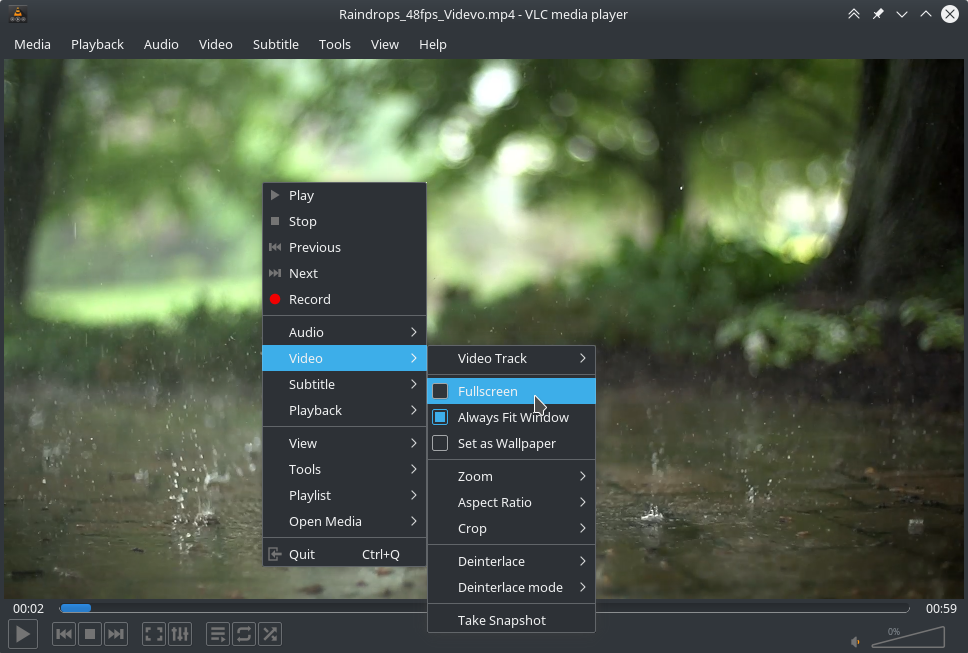 The VLC player is probably at the top of the list of applications responsible for introducing users to open source. A tried and true player of all things multimedia, VLC can play music, video, optical discs. It can also stream and record from a webcam or microphone, making it an easy way to capture a quick video or voice message. Like mpv, it can be controlled mostly through single-letter keyboard presses, but it also has a helpful right-click menu. It can convert media from one format to another, create playlists, track your media library, and much more. VLC is the best of the best, and most players don't even attempt to match its capabilities. It's a must-have application no matter what platform you're on. 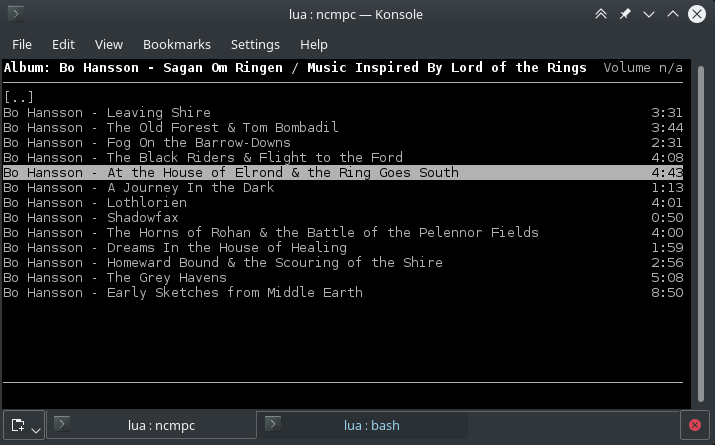 The music player daemon (mpd) is an especially useful player, because it runs on a server. That means you can fire it up on a Raspberry Pi and leave it idling so you can tap into it whenever you want to play a tune. There are many clients for mpd, but I use ncmpc. With ncmpc or a web client like netjukebox, I can contact mpd from the local host or a remote machine, select an album, and play it from anywhere.

Playing media on Linux is easy, thanks to its excellent codec support and an amazing selection of players. I've only mentioned five of my favorites, but there are many, many more for you to explore. Try them all, find the best, and then sit back and relax.

For music, I think you have missed one of the better ones: gmusicbrowser.

I've tried many other music managers and players, and for me gmusicbrowser is very much the best. The tag editor is very powerful, it automatically retrieves lyrics, the layout of the player is highly customizable.

It went a long time without any development, but has been restarted in the last year. The current 1.1.99.0 beta version is a big improvement in stability. Worth checking out if you have even a modest music collection.
http://gmusicbrowser.org/

I'd somehow managed to never hear about this one, thanks! I've downloaded the source and will try it out today.

Nice article Seth, I use Rhythmbox for listening to podcasts too!

I like to use mplayer from the command line. Very simple to use.

I like mpv or VLC for video, both work very well but mpv gets less in the way, so I prefer it.

For audio I like Amarok which is in a bit of a mess at the moment, so I'm using the less good Clementine.. Once they have it ported to Qt5 I'll go back to it though.

While I pretty much use VLC by default, I'm surprised Gnome's Lolipop player wasn't mentioned since it's pretty much a backed-in tool for the desktop. I also like using Strawberry once in a while just to test stuff randomly.