What is your favorite issue tracking tool?

Life is full of bugs.

No matter how carefully planned, no matter how much time went into design, any project is going to have unforseen issues when the rubber hits the road in the implementation stage. And that's okay. Perhaps the best measure of resiliency for any organization is not how well they handle things when everything is functioning as planned, but rather, how they handle the speed bumps when they come along.

A critical tool for any project management workflow, especially in the software development world, is an issue tracker. The basics are simple; allowing bugs to be opened, tracked, and resolved in a collaborative manner, while making it easy to follow the progress. Beyond the basic functionality, there are a lot of options focused on meeting specific needs, features, and use cases, including software development and beyond. You may be familiar with hosted versions of these tools, like JIRA, GitHub Issues or Launchpad, some of which themselves have connections to the open source community.

So let's take a look at four excellent choices for managing bugs and issues, all open source and all easy to download and host yourself. To be clear, there's no way we could possibly list every issue tracking tool here; instead, these are four of our favorites, based on feature richness and the size of the community behind the project. There are others, to be sure, and if you've got a good case for your favorite not listed here, be sure to let us know which is your favorite tool and what makes it stand out to you, in the comments below.

Redmine is a popular issue tracking tool built on Ruby on Rails and dating back to 2006. Similar in many regards to Trac, another one of our favorites, Redmine is capable of managing multiple projects and integrates with a number of version control systems. In addition to basic issue tracking, Redmine also offers forums, wikis, time tracking tools, and the ability to generate Gantt charts and calendars to track progress.

Redmine is fairly flexible in its setup, supporting numerous database backends and dozens of languages, and is customizable as well, featuring the ability to add custom fields to issues, users, projects and more. It can be further customized with a number of community-created plugins and themes.

An online demo is available if you’d like to try it out. Redmine is licensed as open source under the GPL version 2; the source code can be found in the project’s subversion repository or mirrored on GitHub. 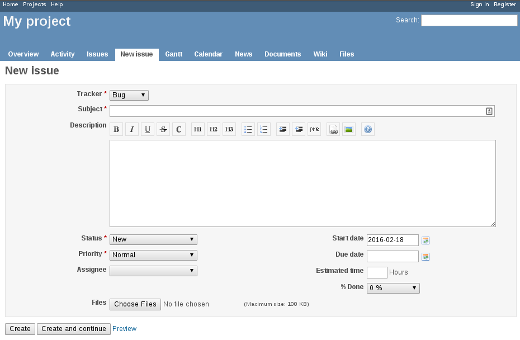 Bugzilla is another popular development tool with issue tracking capabilities. As you might have guessed from the name, Bugzilla was originally created by the Mozilla Foundation to track bugs in the development of the then-called Netscape Communicator suite. Ported to Perl from its original Tcl routes for greater accessibility, Bugzilla is one of the older and more widely adopted issue tracking systems, as it is used by a number of well-known open source projects like GNOME, KDE, and the Linux kernel itself.

Sporting a number of advanced tools, from notifications to duplicate bug detection to shared searches, Bugzilla is certainly a more feature-rich option. Bugzilla has an advanced search system along with a comprehensive reporting tool, capable of generating charts and automated scheduled reports. Like Redmine, Bugzilla is extensible and customizable, both in the fields themselves as well as featuring the ability to create custom workflows for bugs. It also works with many database backends, and many different languages are supported out of the box.

Bugzilla is licensed under the Mozilla Public License, and you can read their future roadmap and try out a demo server on the official website. 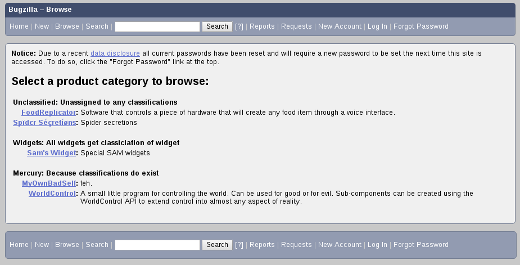 Trac describes itself as taking a minimalistic approach to web-based software project management, but don’t confusing minimalism with a lack of features.

Written in Python, Trac tightly integrates its bug tracking capabilities with its wiki system and a revision control system of your choosing. It features project management capabilities like generating milestones and roadmaps, a customizable reporting system, timelines, support for multiple repositories, built-in spam filtering, and is available in many common languages. Like the other bug trackers we have looked at, has a number of plugins available for it extending its base feature set even further.

Trac is made available as open source under a modified BSD license, though older versions were released under the GPL. You can view Trac’s source in a self-hosted repository or check out their roadmap for future plans.

Mantis is the final tool we’ll look at in this collection, a PHP-based bug tracker with a sixteen year history. Another bug tracker with support for many different revision control systems and an event-driven notification system, Mantis has a similar feature set to other tools here. While it does not itself contain a wiki, it integrates with many popular wiki platforms and is localized into many languages.

Mantis is licensed as open source under the GPL version 2; you can browse its source code on GitHub or check out the self-hosted roadmap for future plans. For a demo, you can check out their own internal bug tracker. 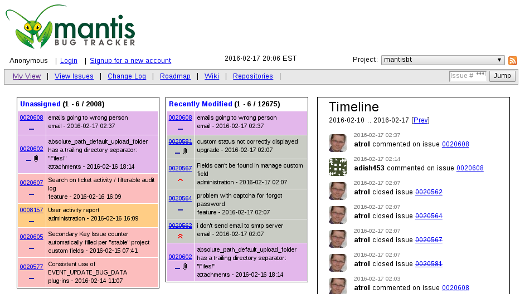 As we note, these four are not the only options. Looking to explore some others? Apache Bloodhound, Fossil, The Bug Genie, and many alternatives all have dedicated followings, each with different strengths and weaknesses. In addtion, some of the tools in our project management roundup have issue tracking capabilities. So, which is your preferred tool for tracking and squashing bugs?

I thought for sure you'd leave out Mantis. I was wrong. Mantis: WONTFIX; WORKSFORME.

I actually use Redmine for managing creative projects. The ability to define custom workflows and set scheduling (plus the SCM integration) make it really nice for both code and non-code projects.

I like Phabricator, which also is the choice of Wikimedia Foundation.

article title seems mislieading. 4 _platforms_ are mentioned, they are not simply "tools". I would have chosen flyspray over mantis, and the others are way beyond the scale of anything I'd ever care to setup/manage. Bottom line: I learned nothing useful from reading this article.

My company (devZing) provides hosting for Bugzilla, MantisBT and Trac. Readers can sign up for a free trial to experience the practicate differences between this Bug/Issue trackers. https://devzing.com/

I used to use Zwiki but now I use roundup

For a light implementation of a bug tracker (and git hosting) you may want to check https://rocketgit.com/
It is under Affero GPL license.

Full disclosure: I am the author.

At the company we use JIRA, but I use Github, GitLab issue tracker and as someone mentioned it above, Taiga. :)

In our company we are using the Roundup issuetracker since 2005. It is the issuetracker also used by the Python foundation. It is very easy to extend and customize.

PROJEQTOR is direct competitor to REDMINE, targeting to integrate all features usefull for project management, and not only bug tracking.
More easy to setup than REDMINE, even more complete, its great interest in bug tracking is :
- possibility to follow-up time spent on tickets
- possibility to copy a ticket into another object, for intance an activity that will be integrated in planning
- possibility to link ticket with any other object : document, risk, meeting, ...
Worth a try.

At Planio we offer hosted Redmine along with git hosting, team chat and a CRM & Helpdesk (more here: https://plan.io/redmine-hosting/ ).

We find that a lot of companies start with hosting Redmine themselves, but at a certain point it make sense for them to specialize and outsource Redmine hosting to us at Planio.

I've noticed that many teams really like Redmine because you can consolidate a lot of different tools (issue tracking, project management, wiki, time tracking, git or svn repositories and more) into one tool, and you can link between them really easily.

For example, you can link a git commit in an issue along with the amount of time spent on that commit.

You save time by avoiding switching between tools or figuring out integrations between them.

Mantis is simple and best. Very easy installation, integrates well with web server and SMTP.
Adding custom fields is nice.
If you need a light weight tracker, I would vote for Mantis.

I prefer Request Tracker from Best Practical. The smooth combination of email and web interfaces makes processing tickets easy, and the Perl core allows for a tremendous amount of flexibility when creating custom modules, statuses, and templates.

JetBrains YouTrack has the best UI I've seen to date.

GLPI - a lot of useful function!

A combination of imdone, github and Waffle with Atom. Referencing repo issues in code.