To gamify or not to gamify community 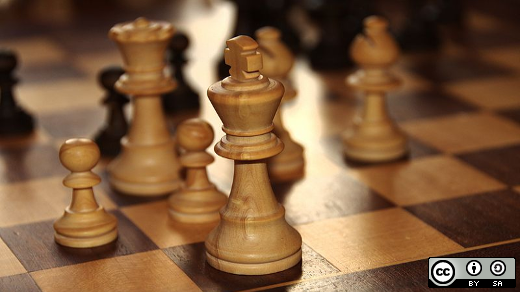 Human beings are inherently playful creatures. From birth, play has an important function in our lives—from skills acquisition, to competition and beyond. We continue this love affair with play throughout sports, video games, and even catching animated animals in Pokémon Go.

Unsurprisingly, gamification—the process of applying game mechanics to different things—has become something of significant interest. Over the years I have had my own flirtation with gamification, too. I designed and created a gamification platform for Ubuntu, have used gamification in other online communities, and studied it as part of my community leadership research.

Interestingly, and particularly within the realm of open source, gamification can divide people. For some it is a fun, playful, and creative way to get people involved. For others it cheapens how people should join communities, and is seen as a shortcut in the absence of better approaches.

To delve into this a little, let me share the story of Ubuntu Accomplishments, and then share takeaways I have learned over the years.

Years ago I was at a Canonical sprint in Europe, where a colleague, who was an active gamer, shared his idea for some kind of high-scores system in which community members could compete in the way they contributed. His off-the-cuff idea got me thinking.

Although a competitive framework was not interesting to me—we had tried a hall of fame, which ultimately didn't deliver the results we wanted—the idea of a gamification platform got me excited.

The more I mused on it and bounced the idea off a few folks, such as Stuart Langridge, core principles bubbled to the surface:

Additionally, I wanted the entire platform to be decentralized (as commissioning hardware/services in the company was going to be a pain), secure from tampering, and completely automated.

This project was no mean feat. So, I rolled up my sleeves, wrote a stack of Python, Twisted, and GTK code, and ended up with this: 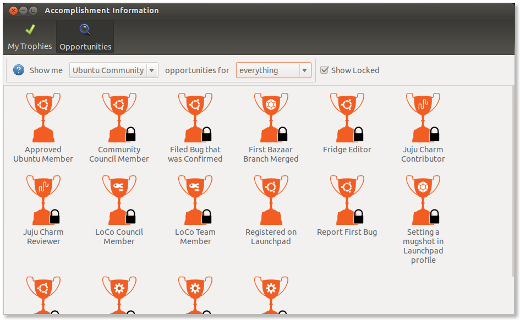 Clicking on a trophy would show how to get it. Here's an example of the StackExchange badges that were integrated: 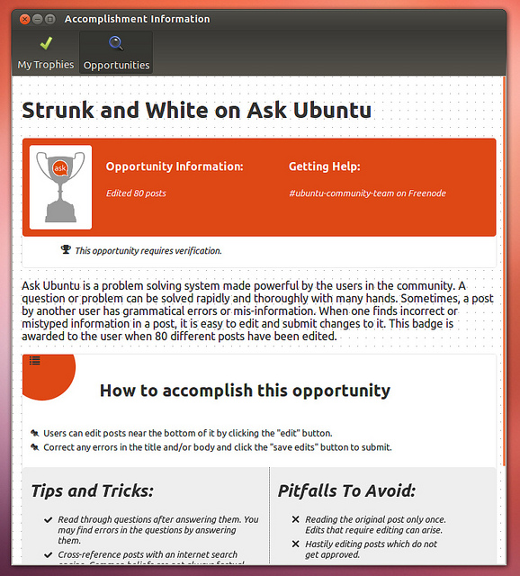 This would help the user understand what the trophy was, how to accomplish it, and share tips and tricks for being successful. If community members performed these actions, they would be detected automatically and the trophy would be awarded.

For the technically minded among you, this is how it worked:

Overall, the system worked pretty well, but it always was something of a hobbyist project. Sadly, we never got the reward system to a point where it shipped in the platform.

From my experience building out Ubuntu Accomplishments—in conjunction with amazing contributors in the community—I came to fairly key conclusions:

Gamification is not just about trophies

We tend to think of gamification as primarily the distribution of trophies/badges based on the successful completion of tasks; however, this is only a tiny piece in applying game mechanics to other areas. Games tap into a wide range of behavioral economics principles and psychological driving forces, such as the importance of ownership, incentives and how they map to growth on a journey, the risks of over-rewarding, and other principles.

Gamification varies depending on context

Gamification varies tremendously depending on the context. For example, the way gamification is applied in video games has a different set of principles and norms compared to my own experiment I shared above. Gamification in video games taps into our intrinsic scavenger instinct. As such, being out to get all you can is perfectly acceptable. In a collaborative open source community, however, this motivation is less socially unacceptable. As such, gamification principles need to be carefully crafted to the context.

Reward is important, but so is discovery

In gamification, so much focus is placed on the rewards that the discovery is often completely absent or poorly implemented. In Ubuntu Accomplishments, the discovery component of being able to learn about the different skills that were available was one of the most compelling aspects for new users. In fact, when I did light user testing around this (and when we switched it on for beta testing), we saw an uptick in people participating. I would argue that this was due to this discoverability aspect.

Gamification is a helpful onboarding tool

Gamification is a tremendous tool for onboarding, particularly for skills-orientated gamification as I shared in my example. Interestingly, though, when users get to a certain number of trophies/badges, they often start losing interest. At the beginning of a new experience, each new trophy/badge is exciting and feels like a genuine reward, but when you have gotten your 160th trophy/badge, the newness tends to wear off. In video games, however, this is less of an issue, as they tap into that scavenger instinct that makes people want to collect them all.

Gaming the system is an inherent risk

Finally, gamification does have the inherent risk of people gaming the system and trying to cheat. In offline video games this is not that big of a deal, but in any kind of online setting, the problem of gaming the system gets more serious. The problem becomes even more of an issue in meritocratic environments, such as open source communities in which reputation should be earned in objective and honest ways.

As such, when designing gamification systems, assessing these risks—which are contextual, as discussed above— and creating a mechanism to combat them, such as encrypting/signing trophies as we did in Ubuntu Accomplishments, is critical.

So that's a quick spin around gamification, and I hope it lit fires in your own minds about how these principles can be used in interesting ways. Be sure to let me know your thoughts, ideas, and feedback in the comments!