Why don't academics discuss research before starting the work?

In a recent blog post, Jack Kelly asked this simple question, and it is a striking one for those of us who are familiar with collaborating at high levels as part of an open source community. One of the pillars of the open source way is rapid prototyping and the idea of: release early, release often.

In the scientific research community, however, the history of and current state of affairs is closed and secretive. Jack Kelly even began his post with:

Warning: this is a hopelessly idealistic proposal...

Despite strides for open access, the reality for researchers is still a great pressure and focus on: getting funding and getting published. Unfortunately, these career goals have eclipsed a greater interest in pursuing the expansion of knowledge and understanding, for which society at large has agreed to fund the scientific research enterprise.

At the core, there has been a confusion of roles. I propose that:

Out of this confusion, the scientific research community has evolved an obsession with what is novel and dismissed the practice of reproducibility verification, which lies at the core of the scientific method. The result has been that, currently, it is a lot more important for a researcher to come up with something new than it is to find something that others can replicate. The peer-review process has failed to play its role of reproducibility verification. It is extremely rare for reviewers to replicate the work described in an article and publishers of scientific journals do not even expect them to.

This crisis, as I percieve it, in the scientific field has created the need for efforts such as the The Reproducibility Initiative. Something that in open source software, we simply call regression testing. Additionally, we do not consider it to be optional at all. 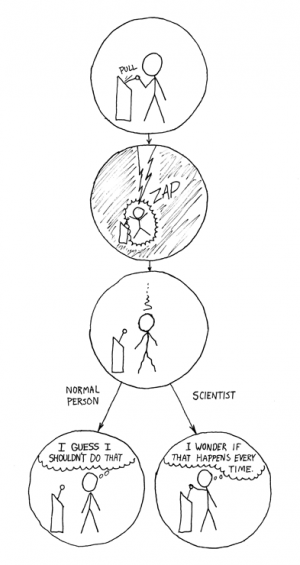 The cautionary tale of the all-too-trusting researcher who gets scooped and whose ideas are stolen is repeated early and often during the education and career of a scientific researcher. Researchers are told, from very early on in their careers, to keep their work secret until they submit it for publication.

In open source communities, however, we know that there is no point in being afraid someone will steal our ideas. Besides, Howard Aiken's quote is quite in point here:

Don't worry about people stealing your ideas. If your ideas are any good, you'll have to ram them down people's throats.

There are a few scientific communities who have resisted this culture of secrecy and worked to cultivate the pillars of the open source way in their work. In particular, the physics and mathematics communities have been openly publishing work in arXiv.org since 1991. Part of the Cornel University Library, the site currently published close to 8,000 e-prints a month.

Publicly sharing information early in the research enterprise will accelerate discovery by facilitating the cross-pollination of ideas and reducing the time that researches spend on difficult challenges. A great example is the power of openly crowsourcing ideas in advanced research fields is the Polymath Project, where a diverse team of interested individuals solved a theorem that had challenged mathematicians for decades. Participants included high school teachers and Fields Medal winners. The Polymath Project has continued and recently claimed success on its eighth challenge.

As funding agencies become more aware of the need to publicly share ideas in scientific research, like with the US Public Access Executive directive, they will see the need to restructure the system of rewards for researchers and their institutions. The hope is that it will become more obvious why the open source way, "release early, release often", and discussing ideas in the open, in public forums is in the best interest of social progress.

Great article Luis. Research done in a closed manner with the only objective of getting published is a short sighted approach.

The fear of being scooped is all too prevalent in academia There are some who will only ever talk about/show already published work for that reason, and in many ways this is driven by the current reward mechanism which revolves around publication, impact factor and the h-index. This is further complicated by the technology transfer office, and the accumulation of "intellectual property" by universities. There are however many movements as you point out that are beginning to address this, and I hope that we will see even more in 2014!