At a recent open government unconference, all city council members—including the mayor of Raleigh, North Carolina—attended some or all of the event. Their attendance wasn't a requirement—and it wasn’t a political drive-by. It was genuine, natural. And some of them got knee-deep in the “code,” competing in the civic hackathon.

The open government event was CityCamp Raleigh, returning for its second year. CityCamp is an international unconference series and online community focused on innovation for municipal governments and community organizations. This marks the first time in CityCamp history when all elected officials from the local municipality attended a camp. It may also be the first time multiple elected officials actively participated and competed in a civic hackthon. Raleigh’s mayor was on a team exploring how community health scoring could be applied to urban planning.

"My favorite part of CityCamp Raleigh was seeing how many people devoted their thoughts and time—it goes a long way," said Mayor Nancy McFarlane. "I saw the collaboration of open source first-hand. The efforts this weekend are making our city better."

Having the mayor and the entire city council attend CityCamp Raleigh exemplifies their commitment to open source. Not only did they unanimously pass an open government directive in February 2012, they attended and participated in CityCamp. Attendees were excited to see their representatives so engaged during the unconference; for some, it restored a trust in government.

CityCamp Raleigh took place June 1-3. On Friday, June 1, CityCampers enjoyed a government perspectives panel, a business perspective panel, and several lightning talks. Runtime Expectations, a live technology/development talkshow on CodebassRadio, recorded all the talks. Saturday, June 2, was the CityCamp unconference, where attendees pitched ideas, groups refined those ideas during sessions, and teams formed around the best ideas. The civic hackathon occurred Sunday, June 3, and one team walked away with a $5000 (US) prize.

When citizens call the public meeting

One of the most amazing moments at this year’s CityCamp occurred when our elected officials jumped right in. Something magical happened. Citizens were looking to solve problems and the elected officials were part of the solution--an equal citizen at the same table. That's unusual, said CityCamp co-founder Kevin Curry.

"Normally, council seeks citizen input by calling a public meeting or workshop," Curry said. "Usually it's in the middle of the day in some obscure government building you'd never otherwise go to. In Raleigh they flipped that whole dynamic around. The mayor and all councilors came because citizens sought government input to solving citizens' own problems."

Other open government advocates will inevitably ask me how to replicate this success—how to get their elected officials more involved in citizen movements—but I'm concerned about what to tell them. Here's the best answer I have: establish an open source culture—not an easy thing to do. It takes time. Obviously, the first step is to invite officials to events and teach them the open source way. It’s up to them to make the commitment and get involved.

What happened at the unconference?

Groups pitched more than 30 ideas, workshops, and projects at Saturday's unconference. Only 25 of them made it to "the grid"—the unconference agenda created on-the-fly based on votes from CityCampers. 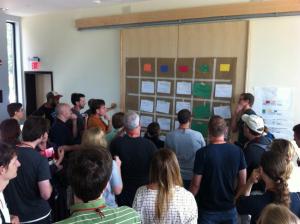 After organizers set the agenda, attendees were off and running. One city councilor pitched an idea for community health scoring that attracting more than 20 people to the session; they formed a team that eventually competed in the session.

During the unconference, attendees documented as many sessions as they could on the Triangle Wiki workshops page. Although the Trianlge Wiki project wasn’t pitched at last years camp, it is one of the major success stories coming out of CityCamp Raleigh. It allows any citizen to contribute local knowledge to an easy-to-use wiki platform based on the open source LocalWiki software.

"CityCamp validated how important and valuable open content is to the community,” said Reid Serozi, a CityCamp Raleigh organizer and Triangle Wiki enthusiast. “Almost every final CityCamp idea had incorporated a stream of content from Triangle Wiki."

By 4 p.m., ten teams had submitted formal teams competing for the prize money. The team project ideas looked like this:

Thoughts on the winning team

All ten presentations were amazing; the ideas were solid. As a judge, I can attest that it was hard to pick a winner. But in the end, one team stood above the rest. Perhaps it was the simplicity of the idea. Or maybe it was the fact that they combined available city GIS data with other assets that made a better user experience for something everyone in Raleigh loves and uses frequently: our greenways. 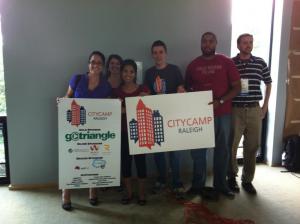 The winning team presented the "R Greenway" application. The maps were already available, and the problem they were solving was simple: How does a user connect to other trails and provide feedback to the city while they are using the greenway? The team included other components like parking maps and integrated SeeClickFix, a non-emergency system for reporting issues like graffiti, downed tree limbs, and similar situations.

This year, one thing that impressed me was the addition of students from NC State’s Design Graphics Lab. Three of the four teams placed in the top five. One of our goals as organizers was to include more students and youth. We accomplished that goal by bringing in students who were prepared to participate in CityCamp.

Another satisfying part of the weekend were the number of mentions and references to Triangle Wiki. It’s a project that spawned after last year’s CityCamp and it’s thriving in the Triangle region. Attendees used Triangle Wiki to document their sessions, projects, and organizers are using it to track the future progress of all the teams.
Compared to last year, we had more participants and better ideas. We had more teams pitch ideas. We have more momentum to keep the projects moving forward, improving, and becoming a reality.

When your entire council shows up to your unconference, it indicates their commitment to open source and open government. Seeing this happening is very fulfilling for me as an organizer. And just as importantly, it makes more of a difference when attendees recognize the significance of this.

Raleigh is definitely accelerating on its path to becoming an open source city. Open source is changing the world. In Raleigh, it’s happening one elected official at a time. Citizens are shaping the open government movement because it means something to them. Open government and open source are part of our culture.

The state of open source contribution through the lens of Hacktoberfest

My favorite line: "This marks the first time in CityCamp history when all elected officials from the local municipality attended a camp."

Kudos to Raleigh's elected officials for recognizing the importance and potential value of a citizen-led event like this.