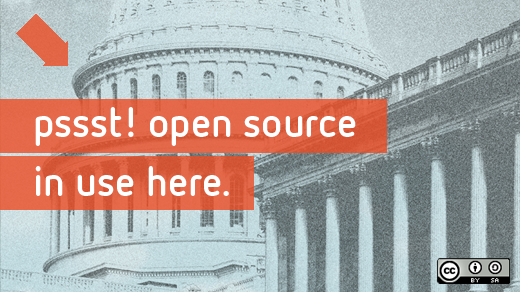 I have discussed recently the NY State Senate progressive stance on open government and its embrace of open source. Capitol Camp 2012 was another display of the powerful benefits the adoption of open practices in government can bring to the public. The event involved an unconference-day and a hackathon-day, both of them fully open to the public. 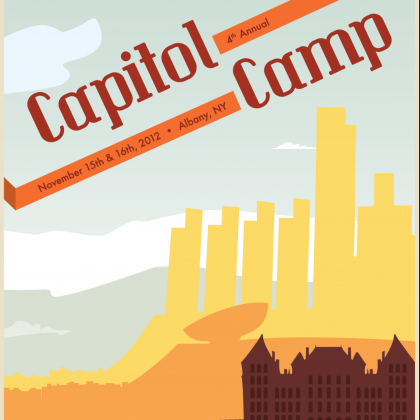 One of the projects started at the Hackathon and improved on afterwards implemented a wish brought forward by Clay Shirky in his recent TED talk where he presented Git as a tool for improving government. Shirky said:

This is called a "DIFF"... this shows you when a change is made, who made it, and what the change is. The stuff in red is stuff that got deleted, the stuff in green is the stuff that got added. Programmers take this capability for granted. No democracy anywhere in the world offers this feature to its citizens for either legislation or for budgets, even though those are the things done with our consent and with our money. 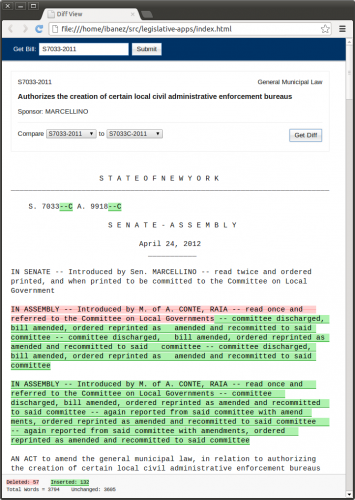 The web interface builds upon the Open Legislation project and allows anyone to query data (using RESTful) from bills at the NY State Senate, even as they are being drafted. The source code of the DIFF app is hosted in Github at the organizational site of the NY State Senate.

One of the fascinating aspects of the hackathon was the full openness with which it was planned and executed. A week before the event, Ken Zalewski, Manager of Application Development at the New York State Senate, visited our Open Source Software Practice class at Rensselaer Polytechnic Institute, shared with the students the open source based activities that are supporting open government practices at the NY State Senate, and provided ample motivation for attending the upcoming hackathon.

On the day of the hackathon we saw a diverse mixture of students, private citizens, and government employees working elbow to elbow, completely unencumbered by the usual obstructions of management rules, procedures, budgets or schedules. The group was simply working together to get something both relevant and cool done.

Other projects in the hackathon included (with links to their GitHub repositories):

The New York State Senate was indeed the first government organization worldwide to be present in Github, starting back in June 2009. The UK Government joined Github with AlphaGov on Feb 2011 and now has more than one 110 repositories open to the public. We also learned during the unconference that the U.S. Federal Government has an agreement with Github to facilitate the use of repositories by any Federal agency. The result is that there are a lot of U.S. government agencies hosting code in Github, including the following (with links to their Github repositories):

The activities done at Capitol Camp are solid steps towards realizing the full potential of open government practices at the Federal level. More information on open government activities specific to NY State are available at the Open Senate site.