A weak case for software patents 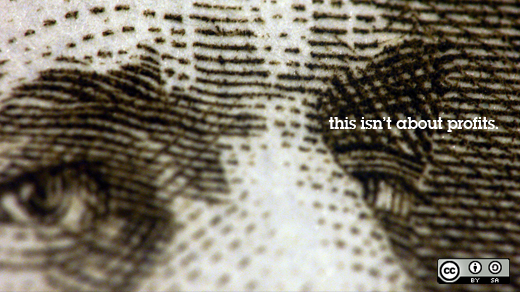 For all the debate and litigation around software patents, I thought that there was at least one point on which all sides could agree: the objective of the U.S. patent system is to stimulate innovation.  A recent IP blog takes issue with that premise, and proposes an alternative objective: making money.  The blog gives a distorted view of  Red Hat's patent portfolio program in support of this argument.  The argument is interesting, and suggests that there's still a steep hill to climb to get to a rational patent policy for software.

First off, let me say that I don't see the software patent debate as a matter of good versus evil. It's about establishing and achieving reasonable public policy objectives. Patent policy relates to commerce, markets, and encouraging material improvement. When the government grants a patent, it grants a type of monopoly, and monopolies entail costs. A patent entitles the holder to exclude others from using the invention, and so that holder may use a patent to prevent competition and hinder innovation. But the widely accepted policy justification for patents is that on balance they encourage innovation and progress.

There's abundant evidence, though, that software patents serve this objective poorly. For example, as Bessen and Meurer explain in their book Patent Failure, the cost from litigation based on patents in some industries, including software, is several times the profits from patents. This means that for the software industry as a whole, patent costs exceed their benefits. This fact is still not common knowledge, but it is slowly sinking in, as patent litigation continues to grow.

Patent lawsuits (even meritless ones) can cost millions of dollars to defend. This reality creates an economic opportunity for non-practicing entities (a/k/a patent trolls) whose only purpose is to threaten and bring patent lawsuits. The large costs of defenses drive many defendants to settle by paying patent aggressors substantial sums taht are still less than the cost of defense. Such settlements may make business sense, but they divert resources that could be used for more productive purposes, like innovation.

Not everyone views it this way, of course. Those who are profiting from the existing system generally think that it works rather well. And they have some appealing-sounding arguments. For instance, they argue that patents encourage innovation by allowing lone inventors to pursue their ground-breaking dreams in the face of powerful corporations. This sort of story tends to excite emotions and hinder rational analysis. It ignores the rarity of inventors who work without significant collaboration, of inventions that are ground-breaking, and of patents that ever recover even the cost of the patent application. Dreams of getting a hugely successful patent are about as realistic as dreams of winning the lottery. Still, it's a nice, and understandable, dream.

A recent blog by Gene Quinn of IP Watchdog takes a more materialistic approach. Quinn describes himself as Patent Attorney and President and Founder of IP Watchdog, Inc. He does not mince words. In his view, those who criticize software patents are “ideological buffoons.” Quinn has this to say to the buffoons who are concerned that software patents hinder innovation: “WHO CARES?” The reason not to care, in his view, is that the only important issue is whether patents make money. Surely Quinn does not mean that  hindering innovation will result in increased societal wealth, so he must  be saying that the only thing that matters is individual money making, and not any larger conception of the public interest.

Even accepting this narrow definition of the good, though, Quinn's argument is unconvincing. It rests in part on the idea that investors believe software patents are valuable and therefore pay more for such investments. This argument is based on weak data, and it collapses entirely once the investors get around to reading Bessen and Meurer and learn the true costs of patents. Quinn's other argument is that software companies need patents in order to deter and defend against patent lawsuits. This presupposes, of course, that there is a justification for granting software patents that can be used for aggression, which is the very point under discussion. As a proof in support of the need for software patents, it's circular.

Quinn is not, however, wrong in noting that successful companies assemble patent portfolios for deterrence purposes. Given the reality of patent aggression, continued survival requires consideration of possible defensives, and deterrence is a potential defense. He cites Red Hat as an example of a company that uses this tool, which is fair enough.

It is unfair, though, for him to suggest that this is a basic ingredient to Red Hat's success. That success rests primarily on its adoption of the power of open source – not patents. It's also unfair to discuss Red Hat's portfolio without including an explanation of Red Hat's Patent Promise in which it commits not to use its patents against open source. Red Hat has been a consistent and vigorous critic of software patents, and it is misleading to suggest otherwise.

In the end, Quinn's weak arguments aren't likely to persuade anyone not already inclined to agree with him. But his frank indifference to the public interest is unsettling. Thinking that short-term gain is the only meaningful value is part of what led to the recent financial meltdown, and it may account for some of the difficulty in advancing patent reform. Quinn's narrow view is a reminder that a lot of grassroots educational work needs to be done to arrive at a more reasonable patent system for software.