Open music: is it viable? 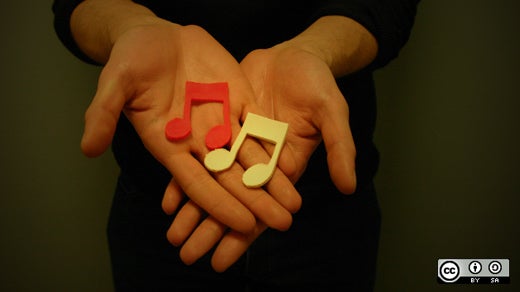 "Open source is a good idea, but no one uses it in the real world." "We can't risk our business on open source--where are the major players?" "We need to know it can work." If you've worked in the IT industry for the past ten years or so, you can remember similar quotes.

No one was willing to bet their business on such a radical way of thinking. Even the notion of this whole new "open source thing" was scary to many. Although we are seeing a change of heart from many in the software side (even Microsoft has contributed to the Linux kernel), it should come as no surprise that the bulk of the recording industry is wholeheartedly against the notion of freedom in music. With all of the encumbering digital rights management (DRM) on music files and giant warning labels on nearly every CD for purchase, the landscape looks very similar to the one we saw of software in the late 1990s. In other words, not only is there essentially no support from the music industry to free their art from overly restrictive licensing models, but, because of this, there is little incentive for indie labels and musicians to do the same. People feel that if the artists and companies they know say it's bad to free music, then it must be bad.

However, it appears that this situation is starting to change. While getting sucked into the infamous "Wikipedia Effect," I stumbled across the Nine Inch Nails (NIN) Wikipedia entry. I've always been a fairly passive NIN fan--listening when they're on and enjoying what I hear, but I rarely actively sought out their music. So it came as a surprise to me that both of their most recent releases have been set loose with the Creative Commons Non Commercial-Share Alike license. Which boils down to this: anyone, anywhere can take any part of the music and, as long as they do not use the works for profit, can remix and sample as much as they want. Moreover--this part is key in my opinion--any derivative works must contain the same license. This means that for the thousands of people who have sampled or remixed NIN's music, the music they release is therefore able to be reworked. A cycle has been started that is hard to break--and it is one that I think many people are thankful for.

Which brings up an interesting point. NIN had to leave their controlling label (Interscope) in order to achieve this kind of control over their music. This is something that many smaller artists are incapable of doing on their own due to the way the industry is set up. Even so, Trent Reznor (primary songwriter/creative force for NIN) has been quoted as saying that this project "doesn't feel like an overwhelming success.” Unfortunately, the source linked here doesn't exactly speak to what parts he is calling a success or failure.  So with that in mind, this much can be said for certain: much like the pioneers of open source software, it's not going to be a walk in the park for the pioneers of an open music industry. However, if more giants like NIN can do this, then it will start making it easier for the rest of the industry to do so. If it continues to prove a viable model for musicians and record labels alike, even the dinosaurs of the industry will be forced to take notice (again we can point to Microsoft as an analogy). Art is meant to be shared, and to share is human. Many of the same principles that are applied to open source software can be applied to the entertainment industry as a whole. NIN still sells their music online and in stores and are still making a good profit. Their music is being shared more than it ever was and under the blessing of the creators. It can work. If more big guns can start doing this, then it's only inevitable that the smaller ones can follow suit.

So, that leaves the next question: who else do you know that does this? Small or big artists, please post them in the comments section. I'd be curious to know if others have broken free and started embracing what is hopefully the future of the industry. Do you see this sort of trend as a good or bad thing? For more information on what you can do with Nine Inch Nails' music, go to remix.nin.com. Included is a free download of their latest album, with many source files of tracks from their albums.