I'm an artist who loves Linux

My father got me a computer for graduation with 512MB RAM and a Pentium processor. It came with Windows XP, and I used it to do 2D animation with Adobe Flash. Back in those days, I was looking for my dream job as a 3D artist, and I'd often see job listings that said: "Linux knowledge required." I had heard of Linux, but had never used it, so I decided to learn more. I didn't have the time or energy to take a class, so I started exploring on my own.

Ok, what to install? And, how do I install it? For a beginner, too much choice was a problem. I downloaded each and every flavor of Linux I could get my hands on and created bootable disks out of them. For the next month, my daily routine was something like this:

I kept exploring this way and got a basic understanding that only the GUI, availability of software, and the packaging changes, but all the internal workings remain almost the same in each flavor of Linux. I kept "basic understanding of Linux" as a skill on my resume and got hired at this amazing place called Rhythm and Hues Studios. There I worked on awesome movies like Life of Pi and Seventh Son. At work we use Linux completely, and I slowly started admiring the philosophy and culture of open source development and came to understand the power of it.

When I was starting out, it wasn't all roses. There were days and nights I spent banging my head trying to figure out how to connect my new WiFi dongle to the Internet, only to find that there were no Linux drivers available for that particular model. Sometimes I couldn't install software because a library was missing, and I'd have to go on a wild goose chase trying to find it. And don't get me started on the Nvidia and Wacom drivers. (Support for Nvidia is way better now, and CentOS 7 has out-of-the-box support for Wacom devices.)

But actually, what I'm doing is a lot of problem solving. In my view, problem solving skills are one of the best things I learned from experimenting with Linux. Yes, learning Linux was a bit daunting. But I kept with it, and the more I learned, the more clear Linux became. I learned a lot about computers, how an operating system works, how devices work, how to search and ask for help on forums and IRC, and how to file bug reports. I got into the habit of reading manuals and figuring things out, which is a basic yet essential skill. I started reading Bash scripts, wrote my own, and got the taste of automating tasks. Eventually, everything fell into place.

The whole animation and visual effects industry is completely reliant on Linux because we are dealing with a lot of data and require huge computational power to create amazing visuals. Linux is the perfect candidate, giving serious bang for your buck. But I didn't leave Linux there—I continued learning more about Linux and became a Red Hat Certified System Administrator. Receiving my certification was one of the happiest moments in my life. Currently, I work at a nice little animation studio called The Cirqus Arts, where I work as an artist/programmer and help maintain the systems, which run CentOS. One of the tasks I really like is training new hires on Linux and introducing them to the world of open source.

My advice for anyone starting out is yes, learning Linux will be a bit overwhelming, but stick with it. You'll thank yourself later. And learn a bit of scripting along the way—there's no limit to what you can do. And, thank you to all the developers who contribute their valuable time and energy to Linux and other open source applications.

See all of my artwork with Linux. 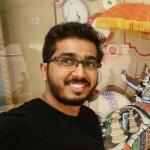 A self-learned artist and programmer. Love art, technology and passionate about the blend of both. Opensource enthusiast, pythonist, javascripter and RHCSA. Currently building an animation pipeline. Blog Art Code IMDB
More about me