A road trip into the Free Software Foundation's early days

I'd learned about something called UNIX a great many years prior, and in 1993, on a two-week language course in Swansea, Wales, I managed to up my storage quota on the university's Pyramid system from 2MB to 4MB, enough to download Slackware from the University of Vaasa's FTP server and bring it back home with me.

Although I did install Slackware on my computer at home, and spent days and nights poring over man pages and learning the basics of the command line from it, I didn't get really excited about the system until I started my studies at the university in 1996. I made the switch to Debian, started programming in C (switching from x86 assembler as the language of choice), and got to thinking about how, in the spirit of free software, a web system could be built to give free (as in gratis) version control repositories, bug tracking, and web pages to free software developers.

In September 1998, having just finished Steven Levy's book Hackers, I worked up the courage to write to Richard to tell him about my idea. Richard wrote back and said that what I had thought about offering to free software developers, was something they were already doing in the GNU Project, and wouldn't I want to help them instead? Just two months later, I had taken on a significant part of the webmaster tasks on the GNU Project. By December 1999, I made first contact with the Free Software Foundation's programming offices at 545 Technology Square in Boston. In some of my writing from that time, I reflected:

On a board in the hallway, someone has scribbled "I've smoked lots of stuff in my time," attributed to Gerald Sussman. Then there's a place where the hallway is filled with information on how to help Tibet. This is where rooms 425-427 are, and if someone is there when you walk by them and the phone happens to ring, you might hear them answer, "Project GNU" or "Richard Stallman." 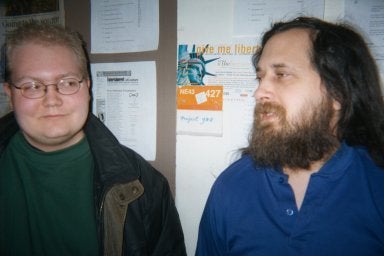 Just moments after I landed in the U.S for the first time ever, in 1999, over a phone connection that could've been much better, Richard was urging me to take a taxi to MIT so I could join for a Gamelan concert that same evening. I wasn't much up for it, and as it end up, Richard played plenty of music for me over the coming days, including an unusual (for me) amount of the Three Swedish Fiddlers, a CD that Richard took great pleasure in showing me.

Now, as interesting as it was to be at MIT, it wasn't the main reason for my trip. In November 1999, Tim Ney, then executive director of the FSF, asked me if I was going to be at The Bazaar in December. The FSF was going to hand out the 1999 Free Software Award, and going to the ceremony was something I had wanted to do for a long time. So, I made the trip, first stopping in Boston where I stayed at both MIT and Brian Youman's house—the guy who, according to the GNU's Who's Who at the time, lifted all boxes over five pounds at the FSF Distribution Office. My old notes explain the rest of the trip, which should be read as the historic document that they are.

I should note that Tom is Tom Turner, a general volunteer that often helped out in the GNU project, and RMS is Richard Stallman. And, the writing is all mine, but it's the writing of 22-year-old me; penned on December 18, 1999:

Went to Tech Square by the T on Monday morning and waited for Richard to wake up so we could take the car down to New York. Eventually he did, and we packed up and went over to Lisa Lewis to pick her up on the way. About 50 miles south of Boston, Tom's car began acting funnily. The engine stalled at various times that at first seemed related to the speed we were driving at. Tom wanted to stop somewhere, rent a car, and go in a rental down to New York. Mechanic guy at the car rental place told us that he didn't think there was a big problem though, so we pushed on to New York.

About half way to New York the car was acting up again. The theory is that water (it was raining) leaked into the electrical system and caused some wires to short circuit. Very interesting to see a bunch of hackers debug a car. The solution was to put some scotch tape over a switch thingy that reported if the door was ajar. This caused the binging thingy to stop binging, but the seat belt sign to still flash. We figured it was better to have the seat belt sign flash than to have the binging thingy go bing-bing-bing and pushed on towards New York. Again.

Arrived in New York around 8 p.m. and first went to drop off RMS. Then it turns out that no one is at home at ADA Core Technologies (ACT) where we were supposed to spend the night. Professor Dewar seems to be out of town and no one is at the offices, so we ended up staying the first night at Richard's mother's place, with me soon falling asleep on her bed.

Around noonish, we all went to listen to Richard's keynote speech, which went very well indeed and was very entertaining. Either way, we still needed to arrange for living accommodations for the night, and the FSF had banners and T-shirts at the ACT that needed to be picked up, so Tom and I made our way there during office hours.

Picked up the FSF stuff and was given a key so we could let ourselves in after the FSF party. Back to The Bazaar and quickly recruited four volunteers that was hanging around the FSF booth and had them carry all stuff from the car to the booth. Arrived four minutes late for the awards ceremony, which was just in time to hear Richard regret that Miguel de Icaza wasn't there to receive his award and then see Miguel rush in through the doors just in time.

Miguel got the award, made a little speech and then we all made our way over to The Cooler where we had free food and free beer. About 20 minutes into the party, Richard complains about the loud music and takes about seven of us (Lisa, Tom, me, Bruce Perens, Jay Sulzberger, and others) to a nice Burmese restaurant where we have some very interesting food and watch a lady tell Richard that computers are obsolete.

Over to ACT, let ourselves in with the key and quickly went to bed. Woke up early in the morning and went by a not-so-expensive pizza/whatever place about a block away from The Bazaar and had breakfast there. Second day at The Bazaar was suitably uneventful until the Andover.Net party in the evening. Very fun! Not so crowded, very good food, good beverages, and well arranged. Too bad that it only lasted for two hours.

After the party we were bussed to FAO Schwartz where more drinking took place along with oogling at children's toys and chatting. A not surprising amount of people spent their time in the room dedicated to Star Wars. Eventually ended up on the floor next to some blue good morning things that played a tune when you touched their paws and chatted some with Lisa. Considered getting several of the blue things for the GNU offices on Tech Square, but eventually saw the price tag.

Forced poor Tom to give us a ride to ACT a whole hour before the party was supposed to end. Third day not a lot happened either, except for a lot of people coming from the eBusiness expo that was taking place simultaneously, looking for freebies. Some of them were genuinely surprised that we charged money for our T-shirts, but we gave them GNU/Linux and GPL stickers to comfort them.

Listened some to Nat Friedman give a talk on Bonobo in the evening, but was dragged away by Tim to help out at the FSF booth when they were packing things together. Went down with all stuff to Toms car, realized that Lisa wasn't around and went looking for her. Found her at the show room floor collecting network cables that were about to be thrown away. Tom drove with Bradley Kuhn to leave FSF stuff someplace else and me and Lisa took a taxi back to ACT where we treated Professor Dewar's wife, Karin, to dinner.

Drove back to Boston in the morning with the car stuffed with various boxes of things. Richard disappeared at 8 a.m. and supposedly took the bus back to Boston. Lisa volunteered to take the bus too if we would only take her network cables back in the car. 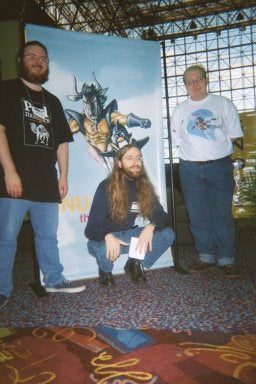 Bradley Kuhn, Brian Youmans, and Jonas at The Bazaar in front of the (then relatively new) GNU/Linux dynamic duo. Photo by Thomas E. Turner. CC BY-SA 4.0.

I keep advocating for freedom and openness, and it strikes me as I'm writing this that I've been an advocate of free software for close to 60% of my life. As such, I guess I live up to the promise I made to Richard all those years ago in 1998: "I swear to you I'll always be true to the community." 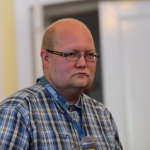 Jonas is a dad, husband, tinkerer, thinker, traveler, and executive director for the Free Software Foundation Europe. He's passionate about the future and bringing people together, from all fields of free and open. He's a Shuttleworth Foundation Alumni and founder of Elog.io, Commons Machinery, Morus konsult AB, and a bunch of other projects and initiatives.
More about me