Social media at the terminal? Why not! 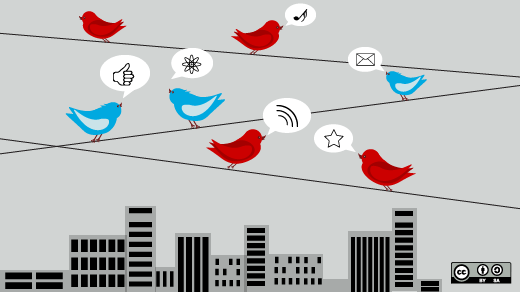 While this may seem like a solution searching for a problem, for some people interacting with Twitter in a terminal window makes sense. There's less distraction at the command line than with a desktop Twitter client or even Twitter's web interface. On top of that, command-line clients are fast and their interfaces are generally quite clean.

No matter why you want to work with Twitter in a terminal, there are applications out there for you. Here's a look at three Twitter clients that you can run from the command line.

Twidge is a simple but effective Twitter client. It lets you interact with your Twitter account in a number of ways, including reading and sending tweets and direct messages, replying and retweeting, and viewing a list of your own tweets. You can even tell Twidge to shorten URLs in your tweets by adding a couple of lines to its configuration file.

Twidge isn't interactive. Every time you want to do something, you need to run Twidge with an option. For example, type twidge update "My message" to post a tweet. If you can't remember an option, type twidge lscommands to get a list of options.

Twidge displays information in a very clean way. You get two columns, with a Twitter handle on the left and tweets or messages on the right.

Oysttyer is a Perl script that packs a number of features into its 8,000+ lines. Unlike Twidge, it's interactive. When you fire up Oysttyer, it grabs your current timeline. Then, it waits for you to tell it what to do.

You do that by issuing one of Oysttyer's built-in commands that gives you an impressive level of control over how you interact with Twitter. Each command has a forward slash in front of it, like /refresh, to get the latest tweets in your timeline.

The forward slash is very important. Oysttyer considers anything that you type without a forward slash in front of it to be a tweet. If you don't include the slash with commands, you're going to leave some of your followers scratching their heads, as I found out!

Like what? Post and reply to tweets, send direct messages, view conversations, and block or mute people. You can even attach images to, and view them in, tweets (plus a whole lot more). 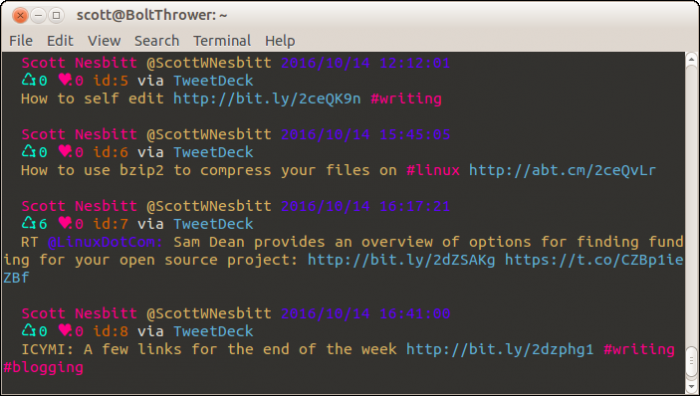 You can also customize the look and feel of Rainbow Stream. It has a number of themes, which change the colors of text and links. You can even change the format of how you quote tweets when replying or retweeting.

What a great article Scott. I had no idea. Now, I'm anxious to try these.

The verify setting (`-verify` on the command line or `verify=1` in the oysttyerrc file) has nearly eliminated my accidental tweeting of commands I meant to type in my other terminal window.

That's one approach. Another is to embrace the randomness of such messages. I would consider following a Twitter account made up entirely of people's mistyped terminal commands.

I used to use Twitter as a password generator. If you keep your window around 80-100 characters, you can get reasonable passwords from the last character on each line. I only used them for "here's the password for your account, now go change it" kind of scenarios. I wouldn't suggest it for a long-term password.

i don't know how well it supports the newer features, but i've had success with TTYtter in the past. i don't use a CLI for twitter primarily though, i use tweetdeck in browser.

Oysttyer is a fork of TTYtter, since TTYtter is essentially a dead project. We've added support for most of the newer API features (but a lot of the new features are not available via the API).

earthquake rubygem is great also, that is my fave, tho i often use python-twitter.
https://github.com/jugyo/earthquake

I use twirssi next to Twitter in a browser. Twirssi is a script running inside IRC client irssi. http://www.twirssi.com/

nowadays tweets contain more than text alone, so IMHO with a CLI twitter client you might miss half the fun.

on the other hand when I use twirssi together with mutt (mail) and newsbeuter (rss feeds) in one i3 workspace, I have a great overview of what is happening. when I want to see the details on a news site or tweet, I just switch over to Firefox in another workspace

Is there anything that the command line can't do? Great article.