How to design your own maker workspace 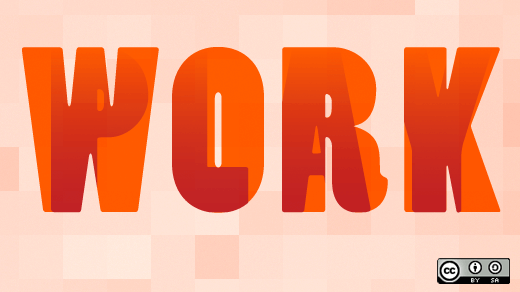 I firmly believe that in the absence of any intentional organizational strategy a person's workspace becomes a reflection of their mind. Like bits of knowledge stored in the brain, tools and assets instinctively find themselves organized in a way that feels right to the individual.

If this holds true, it stands to reason that, more often than not, our workspaces are always naturally trending away from being tidy and highly-functional. At this point, the odds are good that I'm just trying to rationalize why my office is an unmitigated disaster most of the time, but since you've made it this far, let's make one more assumption: No two people are exactly alike, therefore no two workspaces are exactly alike.

With this assertion firmly in place, I'd like to share a few things I've implemented for creating my workspace that have worked well for my brain. Your workspace will look different, but the practices I chose to follow here can be used for anyone looking to match their setup to their brain. 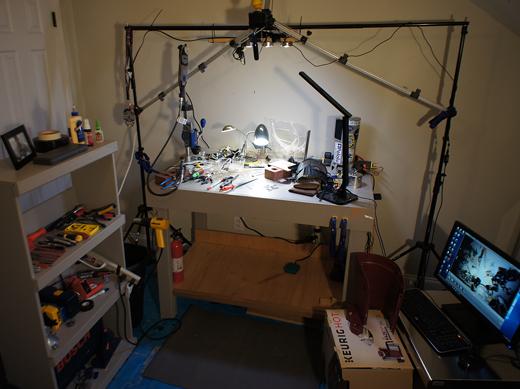 Stop worrying about doing it wrong

At its core, my workspace reflects the cobbled-together and quasi-functional approach I take to problem-solving in general. My wife found the workbench and shelves on a Facebook community swap group, which we later discovered were comprised of cast-offs and scraps from a bored carpenter's day job. I paid a princely sum of $45 for the pair, which, by the way, are absolutely rock solid. In my humble opinion, time spent stressing about whether or not to drill that hole to make way for a bolt or to screw down a jig, or to otherwise cause irreparable damage to your workbench, is time completely wasted. Since I'd pay $45 to watch a monkey smoke, I can unceremoniously strike worrying about damaging my bench off my list of concerns, which frees me up to experiment and discover new ways to get stuff done.

To illuminate my workspace, I ran every object in my house through a unified filter: "Does $THING light up? If so, would anyone immediately notice if $THING went missing?" One of the items in the resulting set was a string of puck-shaped lights that was designed for furniture manufacturers to install inside various casegoods, or to serve as undercabinet lighting. I believe a whole box of these things was abandoned after one of our local, semi-annual High Point Furniture Markets.

I fastened a few of the pucks to a 1"x3" poplar board, and used zip ties to secure the resulting fixture to the horizontal crossbar of a variable-height photographic backdrop system. That, in combination with a few garden-variety desk lamps, provided an acceptable amount of distributed light across my work area. 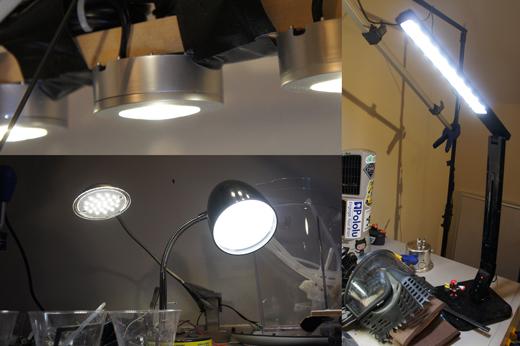 With basic furniture and lighting squared away, my workspace is starting to come together, but it's still pretty boring and unremarkable. However, much like the ratios on a vehicle's gearbox, a workspace should always be tuned to most effectively deliver the desired output. Before I started configuring my workspace for Jittery MacGyver—a project which entails dismantling Keurig coffee makers and repurposing the parts to build other stuff—I spent some time pondering the unique processes and challenges I would likely encounter along the way, and how to best tailor my workspace to perform commensurately.

Ten minutes later I was staring at a blank spot on my office wall and thinking about how many lives would be ruined if we ever find a way to reliably interpret and display what cats are thinking in real-time. <Sigh>.

Despite that immensely successful planning session, I did manage to come away with three pillars for my overall workspace philosophy:

Since I knew I would be working on Jittery MacGyver with tiny amounts of time left over after working a fulltime job, occasionally traveling for speaking engagements, being a "present" husband, and being a dad/co-pilot/gelatinous monster/climbing tree for my two year-old daughter, I wanted to make sure the amount of time I'd have to spend between sitting down at my workbench and being able to get stuff done was as minimal as possible. The rationale here is the same one behind setting up bills to automatically draft instead of having to mail a check: fewer monotonous barriers to meaningful progress means less fuel for our procrastination engines.

To keep the start-up time minimal, I set all the lighting and tools on two power strips, and my camera stays powered up, configured, and ready to film at a moment's notice. Walk up, flip two switches, press record (I'll talk about this in a bit), and I'm off to the races. This stuff may seem obvious, but for me, I've found that if I don't consciously make my workflow ultra-convenient, work isn't nearly as likely to get done. If you enjoy the work you're doing, but still find yourself put off by the thought of starting, I'd definitely recommend examining your start-up processes to see if they are candidates for optimization.

Find a home for primary tools

Have you ever taken on a DIY project that required you to learn a completely new skill, or use an unfamiliar tool? I sure have. And if you're anything like me, you know that there is a unique feeling associated with suffering through a project, becoming intimately aware of the shortcomings of your tinkerer-tier setup and tools, and then sitting down at a workspace that is purpose-built to accomplishing that same task—one with all right tools, materials, jigs, etc. It's a difficult sensation to describe, but I would liken it to a feeling of intense relief, followed by the sense of empowerment that comes with learning the trick to doing something, however obscure.

Since I knew I would be doing a lot of custom fabrication out of existing Keurig parts, it was clear that precision freehand cutting and sanding needed to be first-class citizens on my workbench. To accommodate this, I suspended a rotary tool on a stand a few feet overhead and paired it with a flexible shaft extension. As an aside, if you know you'll be doing a lot of stationary work with a rotary tool, I really can't recommend the flexible shaft extension highly enough.

As I became more familiar with this setup, I fashioned a cradle of sorts for the extension out of a pipe wrench, a brick, and a small clamp. This simple addition allows me to quickly transition to using both hands for other other tools and tasks without having to wait for the rotary tool to completely wind down. A foot switch that toggles power to the rotary tool makes the whole package highly effective and an absolute joy to use. 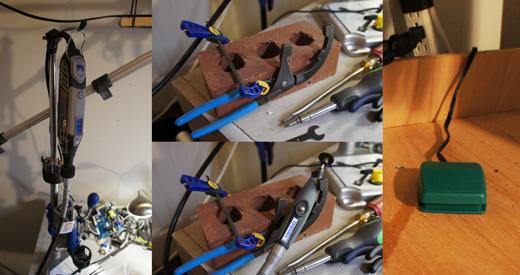 As I get older, I find myself thinking about how awesome it would be if I could recover every single file I've ever created throughout my entire life. How much would you be willing to pay for something like that? Shoot... how would you even begin to quantify it? Unless the National Security Agency decides to provide this service at some point in the near future, I doubt this dream will ever come to fruition. To that end, it should come as no surprise that I find having the ability to easily capturing footage of what's happening on my workbench to be an incredibly valuable piece of functionality.

To accomplish this, I used some duct tape and zip ties to secure a tripod to the aforementioned photographic backdrop system for an attached USB HD webcam to have a bird's-eye view of my workbench. A nearby PC running video capture software displays the feed on a monitor, which is always just a quick glance away. Because I knew I wanted to have the ability to stitch all of the build footage together and create an end-to-end timelapse of the entire process, I figured I would need to figure out a way to start, pause, and stop a recording quickly and with minimal disruption. 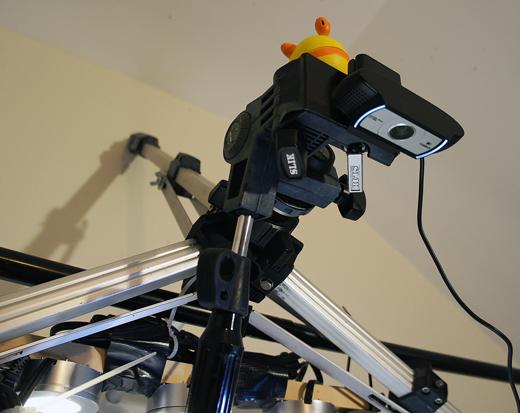 The capture software I'm using, YouCam, provides keyboard shortcuts, F4 and F3, for starting/pausing and stopping a recording, respectively. My initial thought was to use a Teensy USB development board and some Keurig parts to create a crude two-key keyboard that would map to F4 and F3. However, after some thought, I realized that I would want this neat keyboard to be displayed on my workbench somewhere, and that I didn't really have enough space for it, and that it would inherently lead to choppy and distracting transitions in the timelapse. My next thought was to use the input device that was already strapped to my wrist: my Pebble Smartwatch. 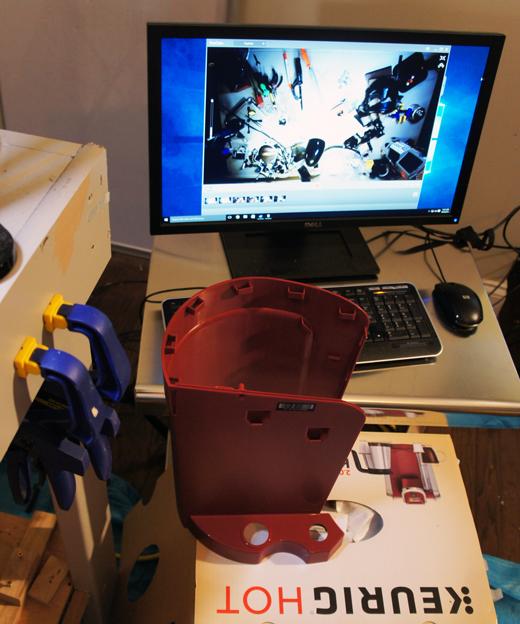 As a proof-of-concept, I started a Unified Remote service on the capture PC. Then, using the wonderful Android app Tasker, along with Unified Remote's third-party Tasker plugin, I was able to create Tasker actions to emulate keypresses (F4 and F3) on the host PC. Finally, I loaded up the PebbleTasker watchapp on my Pebble, which binds each of the three physical buttons on the right side of the Pebble to a Tasker action of your choosing. I assigned the top button to start/pause a new recording, and the bottom button to stop recording. The resulting interface looked like this. 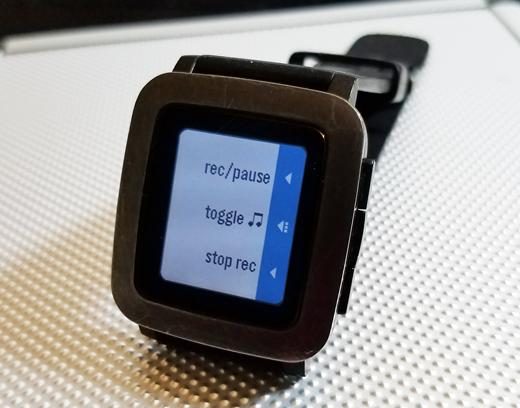 After a few weeks of real-world use, I decided that the Pebble was definitely the most natural and efficient remote for managing the video capture. The only issues were the small lag between pressing a button on the Pebble and the execution of the corresponding action on the capture PC, the lack of meaningful feedback from the capture service on the Pebble, and the lack of the current time on the PebbleTasker watchapp.

I decided to address these issues by completely replacing Unified Remote and Tasker with custom purpose-built apps. A very simple Node.js script using the Express framework exposes an HTTP service on port 4444 on the capture PC that listens for GET requests on two routes: /cam/start and /cam/stop. When a valid request comes through, Node executes a batch script that sets the focus on YouCam and simulates the keystroke that corresponds to the HTTP request. Finally, a native Pebble watchapp maps the top and bottom physical buttons on the Pebble with corresponding, asynchronous HTTP requests to the service running on the capture PC. Simple, fast, and stable. 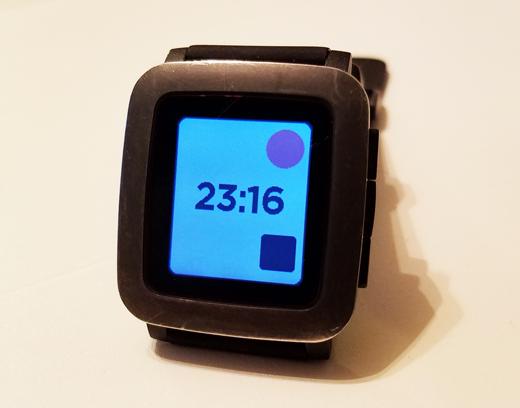 Creating your own workspace

I hope this overview encourages you to experiment with new and unique ways to make your workspace more like, well, like you. If you want to take a look at (or use) any of my code, the Node.js service and Pebble watchapp repositories are available on Github. Finally, if you have any questions, or want to chat about the finer points of vinyl Homestar Runner memorabilia, please feel free to reach out to me on Twitter via @evanbooth. Direct messages are open!

Evan Booth - Put simply, Evan Booth loves to build stuff out of other stuff. Throughout 2013 and into 2014, in an effort to highlight hypocrisy and "security theater" brought about by the TSA, through a research project called Terminal Cornucopia, Evan created an arsenal ranging from simple, melee weapons to reloadable firearms to remotely-trigger incendiary suitcases—all solely comprised of items that anyone can purchase inside most airport terminals *after* the security checkpoint. Evan's current project...
More about me