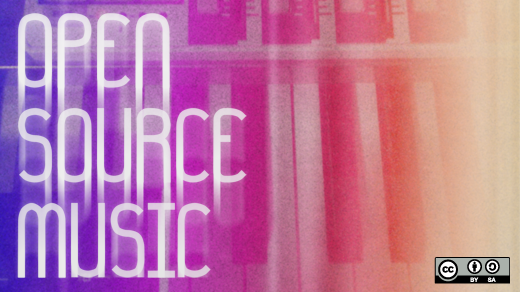 Some time ago the MOD Duo jumped onto my radar. In a nutshell, it is a guitar stomp box that comes loaded with different effects and sounds. Instead of buying the multitude of guitar pedals that many musicians string together in complex, if somewhat beautiful ways, the MOD Duo negates all that. It is a single box and what's more, it is powered by open source.

Now, when I say it is powered by open source, I don't just mean it runs Linux, but we will get to that a little later. In the meantime, let's delve into what this thing is.

The MOD Duo started out life as a Kickstarter campaign. The peppy campaign video promised an interesting concept. You buy the MOD Duo, which looks like this: 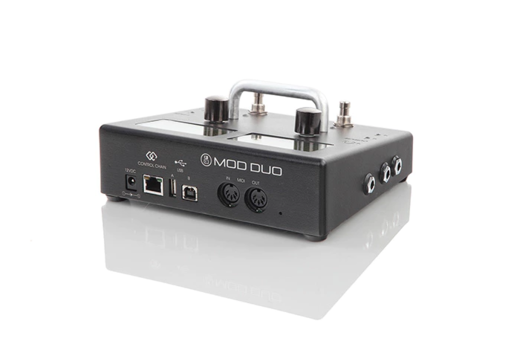 Inside the beefy-looking steel enclosure is a computer that is loaded with software for generating lots of different guitar effects and sounds. This includes delays, reverbs, choruses, flangers, and more. When you plug this thing into you computer, you can then use a web interface to build your own virtual pedalboard:

Just like a physical pedalboard, you drag the different virtual stomp boxes onto the floor and use cables to connect them together in different ways.

When you have created your sounds, the MOD Duo will save them and you can call them directly from the hardware unit. This means you don't need a computer to use the MOD Duo to play gigs; you only use the computer to configure your pedalboards.

The interface is not just used for creating sounds, though. You can also browse additional virtual pedals and download them, and create banks of patches.

When I first saw the MOD Duo, I immediately laid down my cold hard cash to support the campaign. Unsurprisingly, the campaign succeeded and got funded. As with most crowdfunding campaigns there were delays on fulfillment, but the MOD Duo team provided plenty of updates in refreshingly exhaustive detail. Eventually, my MOD Duo arrived.

Without turning this into a full review, I was pretty impressed with the device. The quality feels better than most music products I have ever bought; this thing could definitely put up with the rigors of the stage. Although I got a very early version that the team kept reminding buyers was not finished on the software side, most of the core elements were there, and there has been a steady stream of updates.

Aside from the coolness of the product and concept, what also attracted me to support the MOD Duo was the extensive use of open source software.

For many years there has been a passionate group of developers who have been focused on building open source music production tools. Many of you are familiar with tools like Audacity or Ardour, but the MOD Duo goes much further.

Under the hood of these different tools are some comprehensive frameworks. I learned a lot about this when I started an audio production project for GNOME some years ago called Jokosher.

First, there is the Jack Audio Connection Kit, also known as JACK. This is a collection of tools that make it simple to route audio in any number of ways. JACK is very focused on professional audio production and as such low latency (the time difference from playing a note and hearing it) has become a key metric of success. Similarly, there was a series of additions to the Linux kernel designed to make audio latency much lower.

JACK and other frameworks such as GStreamer take care of these core audio routing pieces. Then on top of this there are frameworks for handling sound effects and processors.

Back in the early days there was the Linux Audio Developer's Simple Plugin API (LADSPA). This provided a standard for developers to build software effects such as reverbs, choruses, and distortions. What resulted were oodles of plugins, many of which built by prolific developer Steve Harris (not the bass player from Iron Maiden).

While LADSPA worked well, it had limitations. The next iteration was LV2. This has now become the standard that plugin developers are working toward.

Although I am no expert on the architecture of the MOD Duo, from what I can tell it is almost entirely open source. It runs Linux, uses JACK, and the plugin standard used is LV2.

Of course, this is pretty neat in itself, but what excites me more about the MOD Duo is the execution of these different components in a way that could have real consumer appeal.

For many years you have been able to plug a USB sound card into a Linux computer, set up JACK, configure your plugins, and output the audio in different ways. Although possible, this was historically complicated to set up and use (hence my inspiration for building Jokosher). Aside from the complexity, it was often clunky to use too. Configuring the order and routing of plugins was a pain, and the individual plugins often felt like complex bits of software as opposed to the simplicity and fun of real guitar pedals.

The MOD Duo changed all this. First, everything is set up and good to go on the device itself. You literally don't need to know jack about JACK. Second, the plugins have completely refreshed and simplified interfaces that look and feel like guitar pedals. Third, the overall interface for stringing these different effects together is simple, natural, and a lot of fun. For the geeks they even go so far as to offer a MOD Arduino Shield for experimenting with different sensors and a MOD software development kit.

When I first heard about the MOD Duo I reached out to the founder, Gianfranco Checcolini, to express my enthusiasm and see how I could help. We set up a call and I made some recommendations around community development and features. At every step Gianfranco, and the wider team, were receptive to feedback, ideas, and importantly, the open source way.

So, aside from all the technical merits of the MOD Duo from an open source perspective, I also love how the team is working in this very community-oriented way. Once again, the real power of open source is not code, it is the community fabric and methodology that underpins it.

So, if you are a musician, or merely an open source fan, I recommend you go and grab a MOD Duo from MOD Devices and join the community at the MOD forums.