A recent message on Twitter about an open source 3D printed violin sent me in search of more information about Hovalin. Much of the 3D printed universe is about robots and drones, so seeing a violin in the mix caused me to pause and wonder more about this unique project. I reached out to husband and wife team, Kaitlyn and Matt Hova.

Kaitlyn is a developer, professional violinist, and a neuroscientist. She believes "that art and science are most impactful when they inform each other." Matt is a developer, electrical engineer, and interested in music production. He is a big fan of open source projects that are made available through sites like Thingiverse. 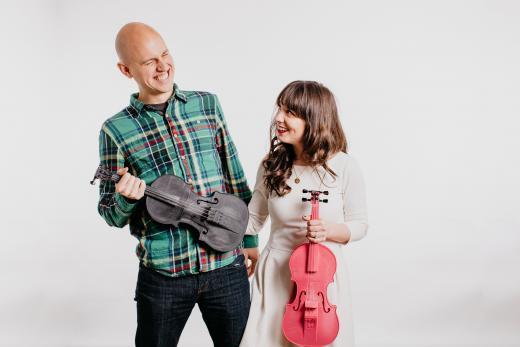 Hovalin's files are available on the website and GitHub, and the project is licensed under CC BY-NC 4.0. I asked why they chose that particular license, and Matt said they weren't sure the best way to license their project openly, so they took their cues from FFFidle, another open source violin project. Recently, Kaitlyn and Matt have released version 2.0 of Hovalin.

"It has a more accurately designed body and is easier to assemble thanks to building the truss rod parallel with the neck's build surface. The Hovalin is not the greatest violin in the world, but (in my opinion) it’s the greatest 3D printable acoustic violin project around today," he says.

They have plans to release version 3.0 soon. And they are currently working on plans to develop a recorder and a ukelele. Their goal is to focus on two or three of the easiest-to-make musical instruments in order to create a STEM music program based around 3D printing.

On others contributing to Hovalin, Matt said, "We’re the sole contributor to the CAD portion of the project, however we've been constantly working with feedback from people as received through email, GitHub, and in person from my coworkers.

"Having four mechanical engineers as coworkers who I can toss ideas off of has probably been the biggest reason for the success of this project," he says.

Editor's Note: At the time of publication, the editorial team did not realize this project is licensed CC BY-NC, which is not an open source license. We apologize for the error.

Interesting article, Don. I wonder if it would be possible, and feasible, to print larger instruments like cellos. That could be a boon for school music departments.

Thanks Scott! I think 3D printing other instruments would be a great idea too.

I'm not sure how successful they will be with a recorder. 3D printed woodwinds tend to be problematic due to the precision of the hole placement and size required to make the instrument in tune with itself. Pretty much all 3D printed woodwinds either don't work acceptably well or have to be hand tuned after printing, and that's with particularly precise 3D printing equipment that most people won't have access to.

Stringed instruments are different because each string is regularly tuned individually as part of the normal function of the instrument. Woodwinds generally have a set relationship between the existing fingerings with only an all or none approach to varying the tuning.

Of course, these people have a musical background, so it seems like they must be taking this into account. I'm still curious as to how they plan to get acceptable results for a recorder.

Thanks for the insight.

CC BY-NC 4.0 is not an open source license, and by not permitting commercial use it is inconsistent with open source principles. I would suggest that this article be revised to clarify this point; this is not an "open source" violin.

I'll forward your comment to our editorial team. Thank you. :)

Thanks Richard. Yes, we realized late that this project was licensed with an NC clause. I have now added an Editor's Note to the article.