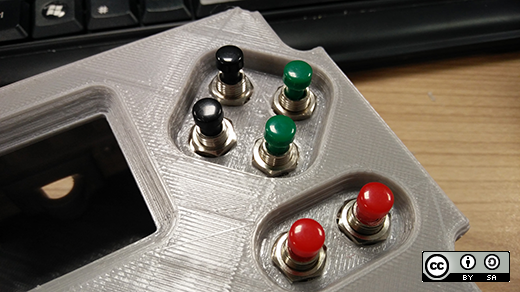 One year ago this month, I published my first article on Opensource.com. I talked about our Astro Pi program in Students compete for a chance to have their Raspberry Pi code run in space. We've come a long way in that last 12 months—in December, our two Astro Pi units were sent to the International Space Station aboard the Cygnus spacecraft on a resupply mission; closely followed by British ESA astronaut Tim Peake.

The student experiments and other coded applications have been running at various times; and most recently, a second competition was coordinating giving school students another chance to submit code to the ISS. Last week the competition winners were announced, and the entries are now due to be deployed to the Astro Pi units—these include music coded in Sonic Pi and MP3 player applications making use of the Sense HAT.

We were required to build a suitable enclosure for each Astro Pi unit, which comprises a Raspberry Pi B+, a real-time clock, a Sense HAT, and a camera module. The flight cases are made of space-grade aluminum and are designed to deal with physical differences in zero gravity (the process of convection doesn't occur, so airflow and overheating require alternative thermal dissipation).

Here's a video of Tim Peake talking about Astro Pi from the space station:

The actual flight case isn't available for sale, as it's extremely expensive to produce. However, 3D printing designs have been released and full instructions on how to make your own have been provided by Raspberry Pi.

Members of the community have been 3D printing their own, some aiming for the look and feel of the space-grade aluminum, others opting for more colorful alternatives:

We've created a catalog of all the case designs we've seen.

You can even order a 3D printed flight case from a company in the U.K. set up by an enterprising young Raspberry Pi fan.

The flight case uses the most hardcore pushbutton switches we could find: the APEM 104350003 (catchy name, I know). But if you're putting together your own case, there are a wide variety of alternative buttons you can use. A good option is the Pro Power PPW01082 from CPC, as reviewed in great detail on the makerspace blog.

Once you've constructed an Astro Pi unit and inserted your Raspberry Pi (a B+, Pi 2 or Pi 3 will fit) and Sense HAT, you'll need some projects to do! The Sense HAT packs an 8x8 RGB LED matrix, a bunch of sensors, and a mini joystick—and you have your six clicky push buttons too. There's plenty of scope for interesting projects—games, demos, science experiments and more. See my article on Exploring the Raspberry Pi Sense HAT, and take a look at the range of learning resources on the Astro Pi website, particularly:

You can program the Sense HAT using Scratch and Python, and there are community developed libraries for NodeJS and other languages too.