Appreciating the full power of open

A balanced approach to openness can yield extraordinary results. 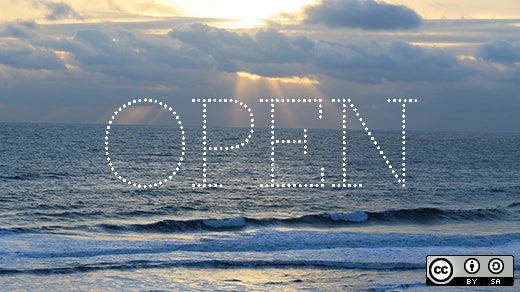 Last year was a big year for open source. As Wired put it, 2015 was the year open source software "went nuclear". More people than ever seem to realize the power of open—not just as a programming methodology, but as a better way to accomplish just about anything.

Of course, as the term "open" gains popularity, its meaning shifts. Sometimes, it shifts so much that we risk overlooking precisely what's making it incredibly important today. If you want to help your organization leverage the power of open, it may be helpful if everyone understands and appreciates what makes the open source way so special.

In my mind, something is open when it emphasizes in equal measure the qualities of sharing, collaboration, and transparency.

Sharing something (like a line of software code, your favorite recipe, or an idea) is a prerequisite for making it open. A group of people working together will always produce a better result than any one person working in isolation. To work together, groups must share their ideas, insights, suggestions, and failures.

While this may sound obvious, it's also very difficult to do, especially in an economic and cultural climate that tends to promote individual ownership and celebrate singular creators. People tend to fear that sharing will somehow diminish their own power or authority. "Why should I share," they think, "when I could benefit from controlling access to something valuable?"

Maybe they guard their recipes and only share finished dishes. Maybe they license their software restrictively or keep its source code secret. Whatever the means, people seem reluctant to share, and they worry they'll lose something by doing so.

Open source communities have taught us that this just isn't true. Sharing something often increases its value, because sharing allows more and more smart, creative people to get their hands on it. The value actually increases as you remove restrictions to sharing—if you share as much as you can with as many people as you can. That means sharing your instructions, your recipe, your source code, and opening it up to everyone, not limiting access to certain persons, groups, or "fields of endeavor," as the Open Source Initiative puts it.

But as important as sharing is, sharing alone is not enough to make something open. I've watched some people claim they're sharing simply by giving an already-finished product away for free. You sometimes see this with various open education initiatives, where content creators share courses by making them available for public consumption online. While this certainly is a nice gesture, these initiatives don't necessarily encourage or even allow others to reuse, modify, or share the materials in turn.

That's why, when it comes to being open, sharing and collaboration go hand in hand.

Openness is a surefire path to better and faster innovation. But innovation, by definition, involves change. Innovation occurs only when people feel a certain freedom to manipulate, experiment, and tinker. Something is open not only if it's shared or available, but also when it's collaborative or manipulable.

At its core, collaboration involves joint work. It's undertaking something together with the understanding that working this way will produce superior results. Collaboration also implies a certain attitude toward failure—"openness" to it, you might say. When we collaborate, we open not only our products to continual revision and refinement, but also ourselves to feedback and critique. Open source communities' ability to rapidly prototype, for example, wouldn't be possible without this spirit of collaborative openness.

When you share without collaborating, you're missing something important. It's the intent and mindset behind an act of sharing that fosters openness. Think about it this way: Are you sharing something just because you want other people to accept, embrace, or adopt it in its final form? Or are you sharing it because you're inviting them to work on it with you? To remix it? To modify, adapt, repurpose, or grow it? The content might be open in the sense that it's freely shared or distributed. But we've all seen examples where a creator's attitude is clearly closed to the possibility of others using that content as the basis for further innovation.

I call this an "attitude" specifically to point out that openness is more than a licensing issue. It's a cultural issue, something that can be rooted in an individual's mindset and an organization's DNA. People can try to make something open by sharing it widely—yet, at the same time, they can be reluctant to allow others to modify, adapt, or build on what they're sharing. They aren't "open" to that.

Yet even combining sharing and collaboration still doesn't fully capture the power of open. Transparency is essential, too.

Something is transparent when anyone can view its inner workings. In the software world, transparency is at work when people publish the source code for their programs so others can see exactly how those programs operate, then learn from them and scrutinize them for insecurities or inefficiencies. But transparency is obviously crucial outside the domain of software, too.

The open government movement, for example, emphasizes transparency of decision-making practices, the idea that everyone should be aware of the processes by which something important gets implemented or altered. So something is open if it's transparent (if everyone can see how it works, how it's put together, and how it came to be the way it is).

For this reason especially, transparency is closely related to accountability. When something is transparent, anyone can tell who's responsible for it. At Red Hat, we care deeply about accountability. In fact, it's one of our core values. Quite simply, transparency helps keep people honest. It ensures that people in an organization own their decisions and actions. And it's integral to openness because without it people don't have the knowledge they need to make the impact they're trying to make, or they're not able to fully contribute to the best of their abilities.

It's important to realize, though, that transparency doesn't guarantee much on its own. People can be utterly transparent about decisions or ideas even while they're forcing them on others. They can make their rationale clear without any inclination that they're open to changing their minds about it.

Likewise, leaders can claim to value transparency—and even act on those claims—without feeling any obligation to let it affect them. In The Open Organization, I critique the "suggestion box" approach to transparency, where leaders invite others to openly (that is, transparently) submit their comments, questions, and suggestions about ways an organization can improve. I understand and appreciate the spirit of the gesture, but nothing about it guarantees leaders will actually read, let alone act on, those suggestions.

Necessary, but not sufficient

While each of these qualities is important, none in isolation is adequate for completely encapsulating the power of open. You must consider them all collectively, as a unit. Essentially, we might say that all are necessary for openness, but none, by itself, is sufficient to create openness.

When you promote transparency in the absence of collaboration or sharing, you get a suggestion box. People are clear on what you're doing, but they aren't invited to participate in shaping what you're doing (so it's less valuable to everyone).

Sharing without transparency or collaboration is possible, too. Think of a situation where people work on software projects in secret, then "throw them over the wall" to an unsuspecting community that's completely unprepared to receive them. Not much value there, either.

And collaboration without sharing or transparency occurs when leaders invite others to work on part of a project while withholding key information about that project (maybe even the reasons they're working on the project in the first place).

I don't consider any of these situations to be truly open—and I'm honestly not sure they create the most value for anyone involved.

Open is more than a simple synonym for sharing, collaboration, and transparency. Open encompasses the power of all three forces working together in tandem.

Combined with our mindset and our actions, it yields extraordinary results.

What to read next
Tags
The Open Organization
Jim Whitehurst