It’s strangely difficult for a default text editor to be taken seriously, and yet the GNOME desktop’s editor, Gedit, is widely regarded as a truly valuable text editor beyond its parent desktop. It’s used as the required text editor in web design classes, a recommended tool for new developers and sysadmins, and a favorite reliable companion to many a desktop Linux user.

If you’re running the GNOME desktop, you probably already have gedit installed, although it may come up only as "Text Editor" in your application menu. If you’re not sure, just type gedit into your Activities screen, and then navigate to the About menu item in the text editor that opens. 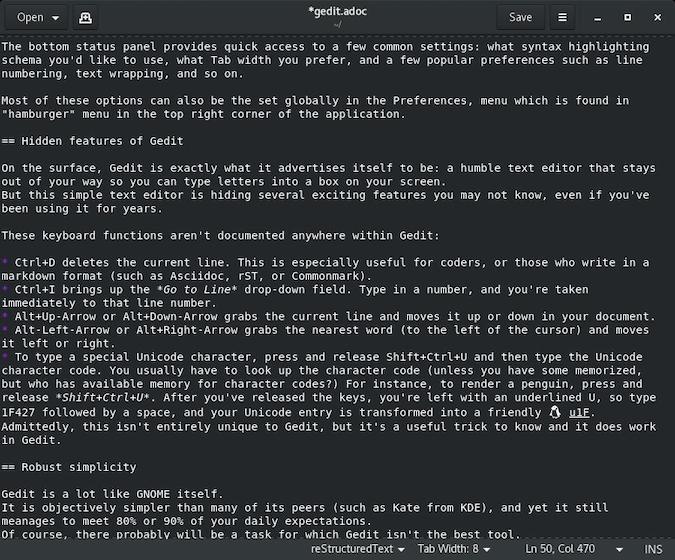 On Windows, you can download and install gedit from the Microsoft Store.

On Mac, you can install gedit using Homebrew or MacPorts.

When you first launch gedit, you’ll get a minimalistic interface consisting of a text entry pane, a title bar, and a status panel at the bottom of the window. The bottom status panel provides quick access to a few common settings—what syntax highlighting schema you’d like to use, what tab width you prefer, and a few popular preferences such as line numbering, text wrapping, and so on. Most of these options can also be set globally in the Preferences menu, which is found in the "hamburger" menu in the top right corner of the application.

On the surface, gedit is exactly what it advertises itself to be: a humble text editor that stays out of your way so you can type letters into a box on your screen. But this simple text editor is hiding several exciting features you may not know about, even if you’ve been using it for years.

Gedit is a lot like GNOME itself. It is objectively simpler than many of its peers (such as Kate from KDE), and yet it still manages to meet 80% or 90% of your daily expectations.

Of course, there probably will be a task for which gedit isn’t the best tool. You might find yourself delving deep into some unique log files or in need of a precise parser or linter, and you’ll move to a specialized application. That’s alright. Gedit isn’t meant to be everything to all users. But it is a great text editor for those in need of one, and sometimes that’s all that's required. Give gedit a try on Linux, or on whatever platform you’re using, because the chances are good that it’s a better choice than the default.