Use this script to find a Raspberry Pi on your network | Opensource.com

Use this script to find a Raspberry Pi on your network

Identify a specific Raspberry Pi in your cluster with a script that triggers an LED to flash.

We've all been there. "I'm going to get this Raspberry Pi to try out. They look kinda cool." And then, like tribbles on an Enterprise, suddenly you have Kubernetes clusters and NFS servers and Tor proxies. Maybe even a hotel booking system!

Pis cover the desk. They spill out onto the floor. Carrier boards for Raspberry Pi compute modules installed into lunchboxes litter the shelves.

…or maybe that's just me?

I'll bet if you have one Raspberry Pi, you've got at least two others, though, and gosh darn it, they all look the same.

This was the situation I found myself in recently while testing a network filesystem (NFS) server I set up on one of my Raspberry Pis. I needed to plug in a USB hard drive, but … to which one? Ol' Lingonberry Pi was the chosen host, and I was SSH'd into her, but which actual, physical RPi was she? There was no way of knowing… 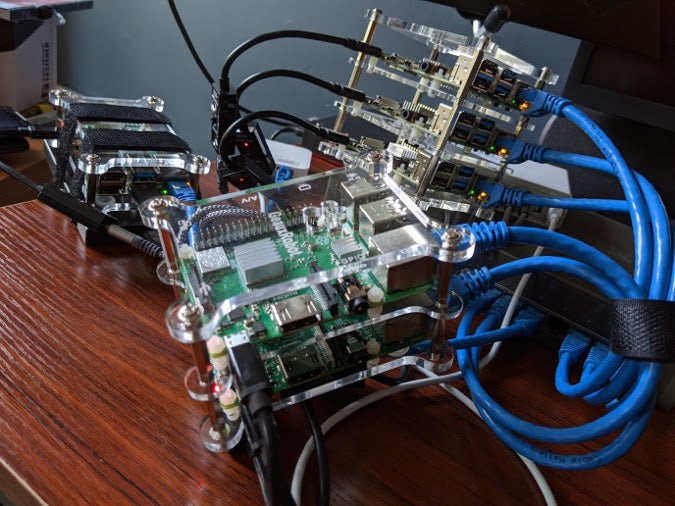 So, so many Raspberry Pis. Which one is Lingonberry? (Chris Collins, CC BY-SA 4.0)

More on Raspberry Pi
I needed something like this to find Lingonberry.

There aren't any buttons on the Pis, but there are LEDs, and after a quick Google search, I learned that one of them is controllable. Cue maniacal laughter.

There are three important bits to know. First, the LED path: on Raspberry Pis, at least those running Ubuntu 20.04, the front (and user-controllable) LED is found at /sys/class/leds/led0. If you navigate to it, you'll find it is a symlink to a directory that has a number of files in it. The two important files are trigger and brightness.

The trigger file controls what lights up the LED. If you cat that file, you will find a list:

The item in brackets indicates what triggers the LED; in the example above, it's [mmc0]—the disk activity for when the SD card plugged into the Raspberry Pi. The trigger file isn't a normal file, though. Rather than editing it directly, you change the trigger by echoing one of the triggers into the file.

To identify Lingonberry, I needed to temporarily disable the [mmc0] trigger, so I could make the LED work how I wanted it to work. In the script, I disabled all the triggers by echoing "none" into the trigger file:

In the contents of the trigger file above, you can see [none] is now the selected trigger. Now the LED is off and not flashing.

Next up is the brightness file. You can control whether the LED is on (1) or off (0) by echoing either 0 or 1 into the file. Alternating 1 and 0 will make the LED blink, and doing it with a one-second sleep in the middle produces a regular on/off blink unlike any of the activity that would otherwise trigger the LED. This is perfect for identifying the Raspberry Pi.

Finally, if you do not set the trigger file back to a trigger, it remains off. That's not what you want most of the time—it's better to see the disk activity. This means you have to make sure that any script you write will reset the trigger when it's finished or interrupted. That calls for a signal trap. A trap will capture the SIGINT or SIGTERM (or other) signals and execute some code before quitting. This way, if the script is interrupted—say if you press CTRL+C to stop it—it can still reset the trigger.

With this newfound knowledge, I was able to bang out a script (available under the MIT License) pretty quickly and toss it onto my Raspberry Pis:

This script checks that the LED control directory exists, disables the [mmc0] trigger, and then starts a loop blinking the LED on and off every second. It also includes a trap to catch INT and TERM signals and resets the trigger. I copied this script onto all my Raspberry Pis, and any time I need to identify one of them, I just run it. It worked perfectly to identify Ol' Lingonberry, so I could set up the disks for the NFS server, and I've used it a number of times since then.

One thing to note—the path to the LED might be different in other distributions. There are also other LEDs in the /sys/class/leds directory, but they are not controllable by the user; they are hooked into different bits of the firmware of the Raspberry Pi.

Do you have any cool Raspberry Pi tricks? Let me know in the comments! I'm always interested in learning what other people do with their infestation of Pis!

Each of these Raspberry Pi projects is designed to make your life easier and more productive.
Lauren Pritchett (Red Hat)

Take our poll to let us know how many Raspberry Pis you have.
Opensource.com (Red Hat)

Add shared filesystems to your homelab with an NFS server.
Chris Collins (Correspondent)

Hi, love the script but I can't get it to work on Raspberry Pi OS. I get an error at line 17 and 24...not sure what I did wrong but I copied and pasted the script from the webpage directly.

Since I'm not very good at scripting, it could be something stupid. Don't hesitate to point out. ;-)

The "[[" is a Bash construct, and the script is trying to run using the old Bourse shell ("/bin/sh").

Change the first line of the script to
#!/bin/bash

Thanks Simon, I was copying and pasting from my own test script when I wrote the article, and must have must have missed that! I'll get the article updated.