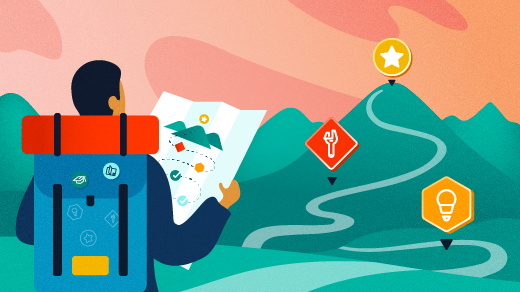 On Linux, you may already be familiar with several of these important environment variables. In the Bash shell on Linux, the PATH variable identifies where the shell can find programs and commands. For example, on my Linux system, I have this PATH value:

That means when I type a command name like cat, Bash will check each of the directories listed in my PATH variable, in order:

And in my case, the cat command is located in the /usr/bin directory, so the full path to that command is /usr/bin/cat.

On FreeDOS, environment variables serve a similar function. Some variables control the behavior of the DOS system, and others are useful to store some temporary value.

To set an environment variable on FreeDOS, you need to use the SET keyword. FreeDOS is case insensitive, so you can type that using either uppercase or lowercase letters. Then set the variable as you might on Linux, using the variable name, an equals sign (=), and the value you want to store.

However, referencing or expanding an environment variable's value in FreeDOS is quite different from how you do it on Linux. You can't use the dollar sign ($) to reference a variable in FreeDOS. Instead, you need to surround the variable's name with percent signs (%).

It's important to use the percent signs both before and after the name because that's how FreeDOS knows where the variable name begins and ends. This is very useful, as it allows you to reference a variable's value while immediately appending (or prepending) other text to the value. Let me demonstrate this by setting a new variable called reply with the value yes, then referencing that value with the text "11" before and "22" after it:

Because FreeDOS is case insensitive you can also use uppercase or lowercase letters for the variable name, as well as the SET keyword. However, the variable's value will use the letter case as you typed it on the command line.

Finally, you can see a list of all the environment variables currently defined in FreeDOS. Without any arguments, the SET keyword will display all variables, so you can see everything at a glance: 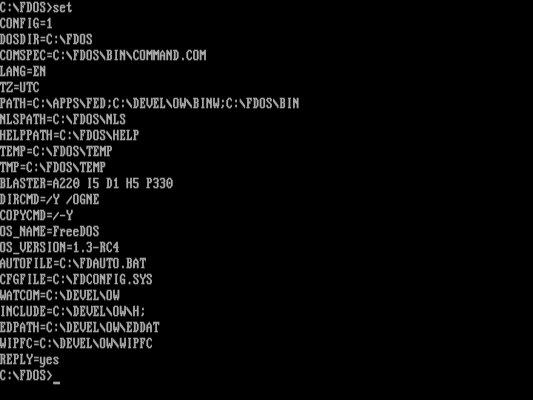 Environment variables are a useful staple in command-line environments, and the same applies to FreeDOS. You can set your own variables to serve your own needs, but be careful about changing some of the variables that FreeDOS uses. These can change the behavior of your running FreeDOS system:

If you accidentally change any of the FreeDOS "internal" variables, you could prevent some parts of FreeDOS from working properly. In that case, simply reboot your computer, and FreeDOS will reset the variables from the system defaults.