I wrote an educational retro computer called the Toy CPU so that my students could learn about machine language.

I teach university courses part-time, including a class about general computing topics, open to all majors. This is an introductory course that teaches students about how technology works, to remove the mystery around computing.

While not a computer science course, one section of this course covers computer programming. I usually talk about programming in very abstract terms, so I don't lose my audience. But this year, I wanted my students to do some "hands-on" programming in an "old school" way. At the same time, I wanted to keep it simple, so everyone could follow along.

I like to structure my lessons to show how you got from "there" to "here." Ideally, I would let my students learn how to write a simple program. Then I would pick it up from there to show how modern programming allows developers to create more complex programs. I decided to try an unconventional approach — teach the students about the ultimate in low-level programming: machine language.

Early personal computers like the Apple II (1977), TRS-80 (1977), and IBM PC (1981) let users enter programs with a keyboard, and displayed results on a screen. But computers didn't always come with a screen and keyboard.

The Altair 8800 and IMSAI 8080 (both made in 1975) required users to enter a program using "switches and lights" on a panel. You would enter an instruction in machine language, using a bank of switches, and the machine would light up the ones and zeros of each binary instruction using LEDs. 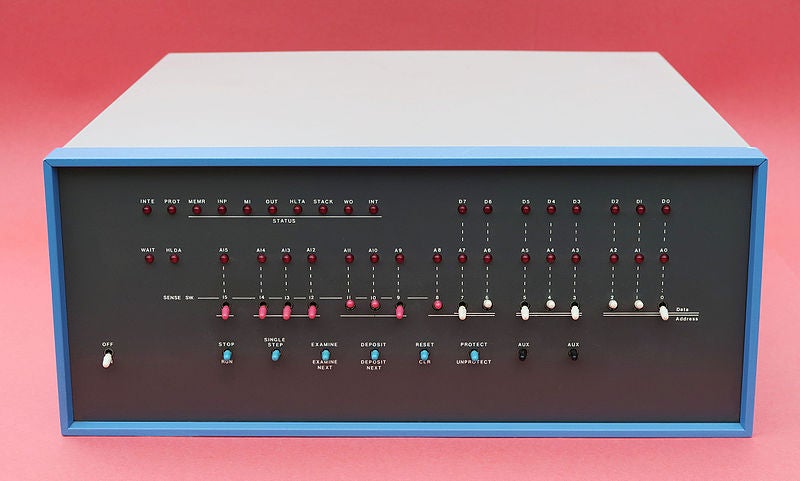 Programming these early machines required knowing the machine language instructions, called opcodes, short for operation codes, to perform basic operations like adding two numbers or storing a value into the computer's memory. I wanted to show my students how programmers would enter a series of instructions and memory addresses by hand, using the switches and lights.

However, using an actual Altair 8800 would be too much overhead in this class. I needed something simple that any beginner-level student could grasp. Ideally, I hoped to find a simple "hobby" retro computer that worked similarly to the Altair 8800, but I couldn't find a suitable "Altair-like" device for less than $100. I found several "Altair" software emulators, but they faithfully reproduce the Altair 8800 opcodes, and that was too much for my needs.

I decided to write my own "educational" retro computer. I call it the Toy CPU. You can find it on my GitHub repository, including several releases to play with. Version 1 was an experimental prototype that ran on FreeDOS. Version 2 was an updated prototype that ran on Linux with ncurses. Version 3 is a FreeDOS program that runs in graphics mode.

The Toy CPU is a very simple retro computer. Sporting only 256 bytes of memory and a minimal instruction set, the Toy CPU aims for simplicity while replicating the "switches and lights" programming model. The interface mimics the Altair 8800, with a series of eight LEDs for the counter (the "line number" for the program), instruction, accumulator (internal memory used for temporary data), and status.

When you start the Toy CPU, it simulates "booting" by clearing the memory. While the Toy CPU is starting up, it also displays INI ("initialize") in the status lights at the bottom-right of the screen. The PWR ("power") light indicates the Toy CPU has been turned on. 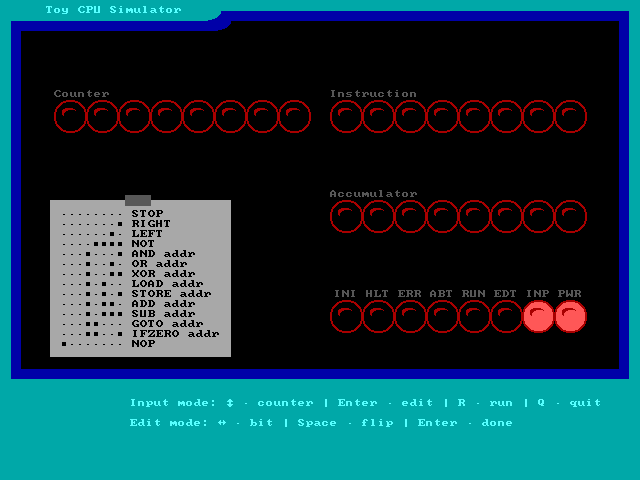 When the Toy CPU is ready for you to enter a program, it indicates INP ("input" mode) via the status lights, and starts you at counter 0 in the program. Programs for the Toy CPU always start at counter 0.

In "input" mode, use the up and down arrow keys to show the different program counters, and press Enter to edit the instruction at the current counter. When you enter "edit" mode, the Toy CPU shows EDT ("edit" mode) on the status lights. 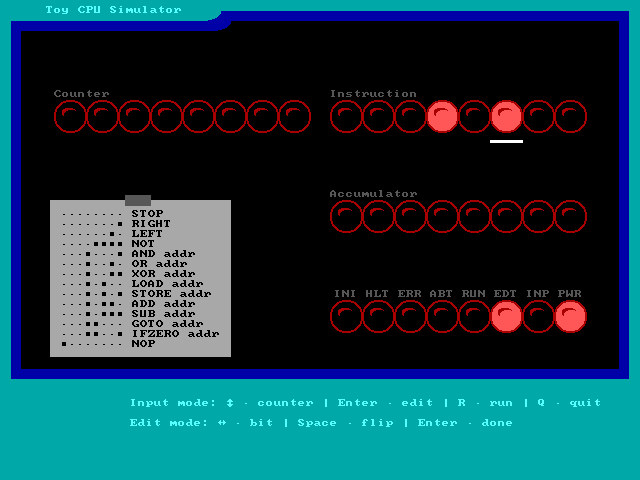 The Toy CPU has a cheat sheet that's "taped" to the front of the display. This lists the different opcodes the Toy CPU can process:

When in "edit" mode, use the left and right arrow keys to select a bit in the opcode, and press Space to flip the value between off (0) and on (1). When you are done editing, press Enterto go back to "input" mode. 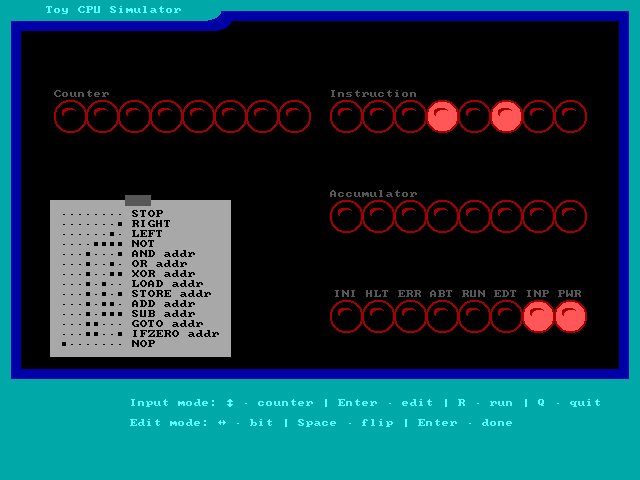 I want to explore the Toy CPU by entering a short program that adds two values, and stores the result in the Toy's memory. Effectively, this performs the arithmetic operation A+B=C. To create this program, you only need a few opcodes:

The LOAD, ADD, and STORE instructions require a memory address, which will always be in the next counter location. For example, the first two instructions of the program are:

The instruction in counter 0 is the LOAD operation, and the value in counter 1 is the memory address where you have stored some value. The two instructions together copy a value from memory into the Toy's accumulator, where you can work on the value.

Having loaded a number A into the accumulator, you need to add the value B to it. You can do that with these two instructions:

Having added the two values together, you can now end the program with this instruction:

Having figured out all the instructions and the memory locations for A, B, and C, you can now enter the full program into the Toy. This program adds the values 1 and 3 to get 4:

To run the program, press the R key when in "input" mode. The Toy CPU will show RUN ("run" mode) in the status lights, and execute your program starting at counter 0. 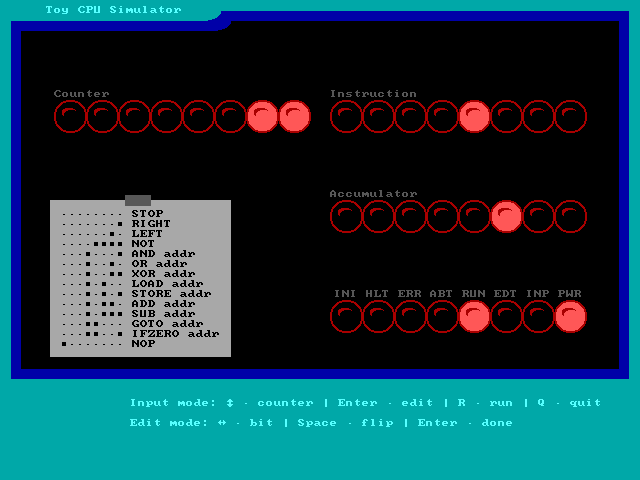 A program to flash the lights on the accumulator

Can you light up the right four bits on the accumulator, then the left four bits, then all of the bits? You can write this program in one of two ways:

A straightforward approach would be to load three values from different memory addresses, like this:

Another way to write this program is to experiment with the NOT and OR binary operations. This results in a smaller program:

Count down from a number

You can use the Toy as a countdown timer. This program exercises the IFZERO test, which will jump the program to a new counter only if the accumulator is zero:

The Toy CPU is a great way to learn about machine language. I used the Toy CPU in my introductory course, and the students said they found it difficult to write the first program, but writing the next one was much easier. The students also commented that writing programs in this way was actually fun, and they learned a lot about how computers actually work. The Toy CPU is educational and fun!

What to read next
Tags
Programming
Education
Jim Hall