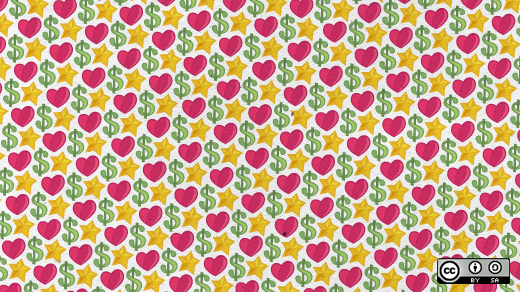 Many graphic designers work with expensive proprietary software because they believe they have to, and it has to be Adobe. But this is not so: There are many fine professional-quality open source graphics applications out there. (Skip down to the end to see 10 of my favorites.)

Conventional wisdom says that in order to work in graphics one has to use Adobe software on a Mac. "Macs are for graphics, PCs are for accountants!" Macs and Adobe are not the only way to produce graphic design, and never were. Those starting out in graphics with open source tools would feel comfortable with them, not having anything to compare them to. It may be a bit more difficult for long-time Adobe or QuarkXPress users to accept alternatives, or even chuck the Mac for Linux. Many graphic designers refuse to believe that yes, they can. If it doesn't cost hundreds of dollars, how could it be any good?

It was a given that graphic designers in the 90s worked on a Mac or Windows PC using Quark or PageMaker. Adobe launched InDesign in 1999 to replace PageMaker and compete with Quark. In 2002, Quark released version 5, but it was not compatible with Mac OS X, which led Quark CEO Fred Ebrahimi to declare: "...the Macintosh market is shrinking and dissatisfied users should switch to something else." Quark users still had to use Adobe Photoshop for photo editing, and Illustrator for vector imaging. This was true for InDesign users as well.

It is expensive to be a graphic designer

I started with PageMaker on a PC, then Quark on a PC, then Quark on a Mac, because that's what I was supposed to do. In 2006, I switched to InDesign because a client required it. I panicked! I was so used to Quark, I thought I'd never be able to produce anything in InDesign—I didn't even own it! I forked over $600 for a copy. I knew how to prepare pages and export printable files, so I just had to get used to a new interface.

I was introduced to open source graphics as the production manager for Florida Sportsman magazine in 2014. All ads we received were PDFs, either InDesign or Quark, except one. An ad came from Panamá and I was curious how it was produced. The metadata indicated the PDF was created from Scribus. Uh-oh, it must be corrupt! I researched "Scribus" and found it was some open source app for page layout. I rolled my eyes and told the salesman to get a "real" file. I found nothing objectionable in the PDF and kept my fingers crossed. It printed just as well as the InDesign PDFs.

Creating graphic design with open source tools works, and the tools look similar to the expensive tools we know. The biggest impediment to switching is lack of awareness and assumed file incompatibility. If a Scribus file is sent to a printer, it will almost always be sent back as "corrupt." If Scribus user was sent an InDesign file, he'd be stuck, right? Not necessarily. It is possible to work with InDesign files in Scribus, sort of. Ignorance is not bliss. 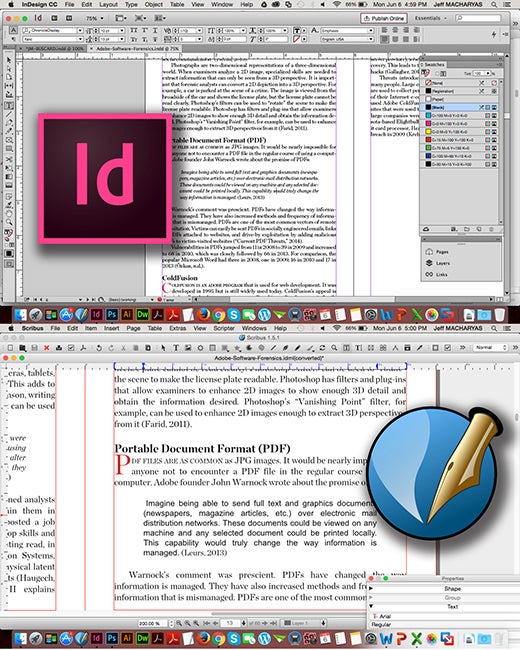 A Google search shows that education focuses heavily on paid graphic design apps, namely Adobe. Adobe even offers tutorials and certifications. A designer can be certified in single Adobe apps or become a "Master." Searching for "certification in graphic design" yields many results, such as this from sessions.edu: "You'll learn the design software programs that every pro needs to know: Adobe Photoshop, Illustrator, and InDesign. Affordable tuition of just $2,999 and easy payment plans make the Professional Certificate program your best value in design education." Or, the Massachusetts College of Art and Design: "Students entering the program must be able to demonstrate basic skills in visual language and should have working knowledge of Adobe InDesign (or Quark XPress), Adobe Photoshop, and Adobe Illustrator." Appending the search with "open source" still yields an emphasis on Adobe.

Open source is not a concept many educators or students contemplate because they aren't the de facto tools graphic designers (or writers, web developers, etc.) are taught to use. Charlie Reisinger, in Back to school with open source: Five tools for less stress and better learning, noted: "To help take the sting [cost] out of this ritual, students and parents might consider turning to free, open source software and tools in preparation for a new year of study."

However, there just isn't much of an effort to educate schools or students about open source alternatives. The Open Source Educational Foundation looked like it was on the right track, but their website seems stuck in 2003, and I did not find anything else related to promoting open source graphics software as professional tools.

Load up your toolbox

The best way to learn a new application is to use it. Many graphic designers aren't familiar with Linux or think it's just for "geeks and hipsters." Fortunately, many open source tools work on OS X and Windows. For designers who don't want to switch to Linux and keep plugging away on their MacBooks, but want to transition, here are some recommendations listed by purpose and followed by the tool with a link and their proprietary counterparts.