2015 at a glance: Open Source Yearbook 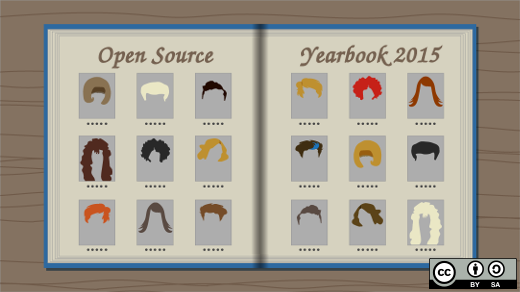 Every year, most news sites write at least one retrospective article, usually more. I like reading these roundups of open source-related news that fill our feeds this time of year, and I'm always amazed at how much happens in the world of technology in a 12-month period of time. These "best of" articles offer a nice summary of the past year from a range of perspectives. But in early 2015, I started thinking about how we look back on previous years to get a snapshot of the top stories in open source technologies and communities over time, and I thought about how handy a yearbook would be. So not long after joining the Opensource.com team in March 2015, I proposed my idea for an annual Open Source Yearbook.

For our first Open Source Yearbook, we reached out to dozens of open source organizations and community members and asked them to contribute articles that help provide a feel for 2015. What were a few of the LibreOffice extensions that stood out in 2015? Which Drupal modules were notable? Which books would publishers highlight if they could only pick a handful from the past year? What did open source wearables and 3D printing look like in 2015? And how in the world could we pick one best couple for our yearbook without offending all the other fabulous open source couples in the world? The 2015 Open Source Yearbook answers all these questions, and many more.

I'd like to thank the dozens of people in open source projects and communities who worked together to submit these stories for the 2015 Open Source Yearbook:

The 2015 Open Source Yearbook offers a glimpse at what open source communities, projects, and culture looked like in the past year. If you, your project, or your organization would like to contribute to our 2016 Open Source Yearbook, submit your story idea. You can also email yearbook ideas and feedback to rikki@opensource.com or leave comments below.

We're already excited about 2016 and look forward to working with the open source community on the next yearbook.

To see reader's favorite stories in 2015, read our Best of Opensource.com series.

What to read next
Tags
2015 Open Source Yearbook
Rikki Endsley

We're giving away 10 free copies of our Open Source Yearbook