Music making with tools for Linux

Do you think music software is only the domain of expensive proprietary software? Think again. There are literally hundreds of applications out there designed by, and for, those with a musical bent. Music projects, including many projects specifically for the Linux operating system, flourish in the open source community as musicians take to coding to produce tools to make their lives easier.

There are also a number of related projects out there beyond software, from free samples licensed under Creative Commons and similar licenses that you can use in the creation of your digital music, as well as, projects like the CASH Music effort which work to open up the music industry to wider participation by lowering the barriers to entry.

Join us as we take a tour of some of the many open source tools for musicians.

No matter what instrument you play, or even if you write all of your music digitally, it pays to understand the foundations of music theory. When you’re writing music, if you don’t understand what notes create harmonies, and why, you’ll be fighting an uphill battle.

Phonascus is an open source tool designed to help you learn how music works. Included are a number of skills and exercises for music students, including both theory lessons as well as those designed to help you tune your ears to what's happening in a composed piece of music. Learn to identify scales, intervals, notes, chords, and cadences, and explore included interactive books on music theory, all from one program.

Phonascus is developed on Launchpad, and is made available as open source under version 3 of the GPL. Compiled versions for both Linux and Windows are available for download. 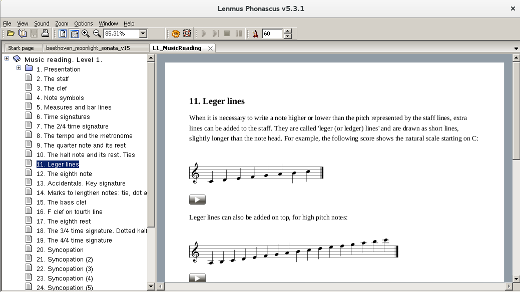 The most basic functionality for working with digital music is simply being able to record and edit audio files. For this task, Audacity is the Swiss army knife you'll need. Released fifteen years ago, Audacity is easy enough for even beginners to get started but still powerful enough that it finds itself in the toolbox of many professional musicians.

Audacity features the ability to import and export in a number of both free and non-free formats; to cut, paste, and edit clips; handle multi-track editing; adjust the speed of recordings; and a slew of other features. It also is built with a pluggable architecture, allowing numerous audio effects to be applied to any track loaded into the program.

Audacity is released as open source under the GPL version 2 or later, and the source code is available on GitHub. Windows, Mac, and Linux downloads are availble from the project homepage. 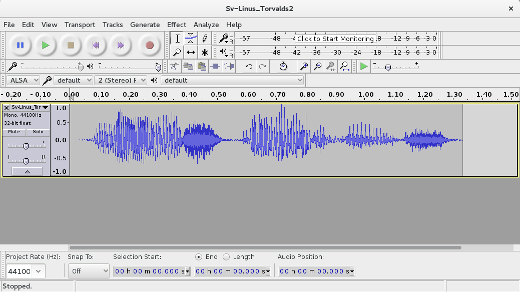 Next up, let's take a look at a tool that will help you keep your instruments in tune. The Free Music Instrument Tuner (FMIT) is much like what you would imagine; the digital version of the little tuner device many of us have sitting in our homes. It tells you if you're on pitch (or not), as well as how the pitch is sustained across the note. It also has a number of more "advanced" information about your tone, from waveform shape to harmonics ratios to statistics.

FMIT is open source under the GPL version 2, works in Linux and Windows, and its source code is available on GitHub. 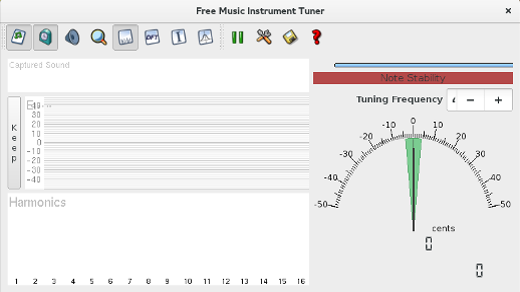 Do you fancy yourself to be a composer? Say goodbye to writing music freehand (or with proprietary software) with LilyPond. LilyPond is a music "engraving" program, allowing your to create sheet music to mach the likes of Beethoven or Bach (talent not included). LilyPond uses text input to convert into rendered sheet music and can be embedded in a number of programs, from LibreOffice documents to plain old HTML, and there are a number of plugins available to make the output render in various content management systems.

The joy of using text for composing music include a certain degree of future proofing, plus the ability to manage your files just as you would any text document. You can edit in your text editor of choice, and use git or another version control tool to maintain revision.

LilyPond works with Linux, Mac, and Windows systems and is published under version 3 of the GPL. 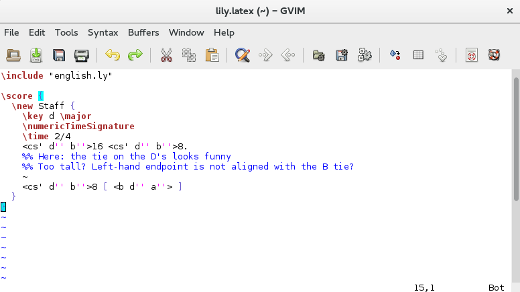 If you want to make your own electronic music, you'll want to find a Digital Audio Workstation (DAW) you like. DAWs contain a number of features, but at their core they'll typically feature a sequencer to arrange notes, sequencer, a number of synthesizers to produce sounds, and the ability to interface with plugins (typically using VST) to apply effects to those sounds or entire tracks.

There are a number of open source DAWs for Linux and operating systems: Qtractor and Ardour are both popular options, but I like LMMS. LMMS (formerly Linux MultiMedia Studio) is very similar to the proprietary FL Studio, and if you have worked with FL Studio before, you'll feel reasonably comfortable in the LMMS environment. LMMS changed its name when it became a cross-platform program, now available for Linux, Windows, and Mac. And, it features a song editor, beat editor, piano input, support for MIDI keyboards, and a number of instruments which work out of the box.

The source code of LMMS is available on GitHub, and is released as open source under the GPL version 2. 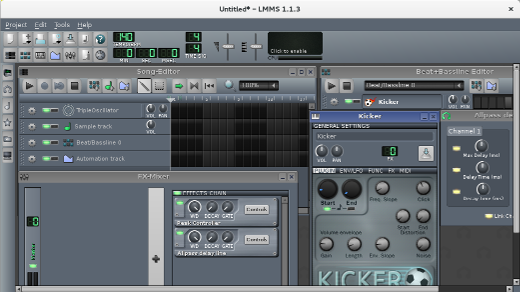 These are a few of the many, many tools available to musicians under an open source license, and we couldn't list them all here. What are your favorites?

I think you should post some of your compositions! Or maybe invite readers to do so...

"when I get some time" I have an itch I REALLY need to scratch with LMMS.

Hah! My talent in LMMS is limited, though that hasn't stopped me from pretending. Maybe I'll do a little bit of a deep dive into LMMS and gear up an unofficial Opensource.com theme song for a future article.

You gotta add MIXXX.org to this list -- an open source DJ software that can stand up to commercial competitors.

... until you actually try to connect an external controller with it. Then, it fails miserably. I have tried connecting 3 or 4 of them, had no success in neither of the cases.

For writing sheet music use Musescore - plays the thing as well and you can export to lots of different machines, read lots of stuff. Has a mixer so you can edit out tracks you dont want.
Prints scores (and parts) fine but you dont need paper stuff these days...
For a recording studio Ardour is great (and you can control it with your phone using ardroid) for a whole studio solution.
CalfStudio, tuxguitar (GuitarPro like (ish)) qjackctrl for linking everything together.
All the above run on the raspberrypi 2 so you can have several tens of thousand pounds worth of studio for around £100!!!

Audacity rocks and is lightweight, so you can multitrack on most standard devices/hardware. Great article, but I beg to differ with your point about learning music theory. I know plenty of musicians and songwriters who are amazing in part for not knowing what is "right" or "wrong" in music.

It's funny you say that; my musical background came mostly from picking up a guitar in my early teens and trying to imitate all of my favorite hard rock bands, whereas my wife is a classically trained musician. I always imagined I would have been better off starting with more formal training at an earlier age, but maybe not?

I guess it also depends on what you want.. there are many accomplished musicians who don't have any formal training. However, if you want to write orchestral pieces, especially imitate classical music.. it's better to learn music theory. I have heard so many orchestral pieces which get the sound in the ballpark but they are frankly .. quite inane in their musical depth. I may be biased because I have classical training and have listened to that kind of music so much. So take it as you may :) Still, I think the highest value in music and music making is enjoyment. Compose, listen, play as long as it makes you happy you're not doing it wrong :)

Very useful for me, thank you! I`d like just add some nice tool, Musescore a very useful program for Win, Lin and Web (thanks to https://www.rollapp.com/app/musescore )

Don't thank RollApp, they're just running things as SaaSS (see https://www.gnu.org/philosophy/who-does-that-server-really-serve.html ). Musescore is indeed great, and anyone can and should run it on their own computer and get it from https://musescore.org/

Obviously, you can't mention every linux music app. But you should point users toward the most complete database of music apps at:

And definitely mention the forum where most linux musicians go for help/info
https://linuxmusicians.com/index.php

These are great resources, thanks for sharing!

This is a great collection of resources. I'm sharing this with my ed tech friends. I knew about Audacity and LilyPond but not the others. Amazing.

You don't mention MuseScore (http://musescore.org), a music-typesetting app which includes a synthesizer. MuseScore is FOSS and available for Windows, Linux and OS X.

I miss MuseScore in the list for writing sheet music. Much easier to use than LilyPond.

Since you already mention Qtractor in the article, I'll add this: MusE. It's a DAW like Qtractor or Ardour, but has some nice built-in UI frontends for some common synths and effects, and is pretty easy to use.

Thanks to everyone who mentioned MuseScore. I'll definitely check it out.

If anyone is particularly interested in MuseScore and would like to submit a review/howto, please feel free! https://opensource.com/how-submit-article