If you're a programmer, you'll find GNU/Linux systems quite powerful and robust. When it comes to areas like visual arts, video, business, or gaming, you'll find some tools with promising potential, but lots of bugs, quirks, and challenges. You can accomplish whatever you need in most cases, but the setup and learning curve may not be as smooth as proprietary options on proprietary systems.

In this article, based on my talk at SCaLE 14x this year, we'll cover the basics of configuring your Linux system for music making, highlighting what works best and acknowledging the challenges with recommendations on how to find help.

To get started with audio, we need some speakers (headphones count). To use any sounds besides those generated entirely by the computer, we want some sound input as well. Older Linux systems used OSS (Open Sound System), and older audio interfaces and computers with Firewire use FFADO, but for almost everyone today, the focus is ALSA: the Advanced Linux Sound Architecture.

Thankfully, ALSA is part of the Linux kernel, so you don't need to know much of anything about it as an end user. All you need to know is if your hardware is supported. Most computers' built-in hardware will work. For better sound and compatibility with guitars, microphones, and other music gear, a more dedicated audio interface makes sense. Any "class-compliant" interface will work, which includes many basic affordable options. A decent number of higher-end interfaces are supported as well. For options with top-notch sound quality, I've had success with the Focusrite Scarlett series. Being updated just by volunteers, the most accessible lists of supported interfaces are rarely complete or up-to-date, but friendly folks on forums and IRC can help.

For the low-latency timing needed for most music making, a low-latency kernel is recommended (but not absolutely required). The best bet is to install one prepackaged as part of a music-dedicated system.

I use KXStudio, a superb collection of repos that can be added easily to any Debian-based (and thus also Ubuntu-based) operating system. Once the KXStudio repositories are added, a simple update and installation of the recommended items will give you a system complete with a low-latency kernel, tons of great programs, a dedicated suite of management tools, and tons of effects, plugins, and synthesizers. The KXStudio maintainers (mainly one guy, actually) do a wonderful job keeping things updated and responding to requests. Do keep in mind this is basically volunteer work done effectively full-time, so consider donating to keep this going. 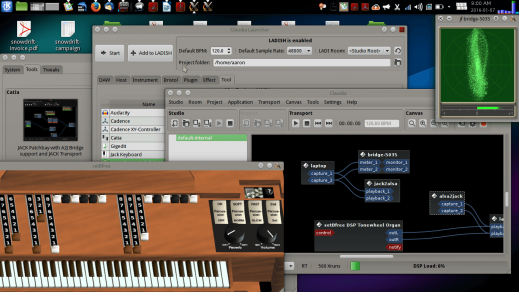 Other audio-focused packages and distros exist, notably AV Linux and Fedora Jam. Several other systems have been made over the years, but most are not updated or active.

Note about 100% software freedom: Although audio-focused distros Musix and Dynebolic received FSF endorsements, the most up-to-date way to have a 100% free/libre/open music system is to use the core Debian system or the FSF-endorsed Trisquel distro and add the KXStudio repos to your installation.

While ALSA works directly with the hardware, other audio layers manage all the signals from various programs and send those to ALSA. Some programs support ALSA directly, while others work with PulseAudio or system's like KDE's Phonon, which works with GStreamer or VLC backends. All this confusion basically means that your system setup interacts in different ways with different programs depending on how well they support and interact with these frameworks.

The primary music-dedicated audio system is called JACK. It provides a backend that supports arbitrary paths for audio (and MIDI, the system used for sending control signals for synthesizers) to and from any supported programs. With JACK, a synthesizer output can go into a reverb plugin and then into a recording program while a separate drum program plays. JACK can start and stop all the playback from multiple programs with any one set to be the master timekeeper.

JACK approaches the unix principle of having small programs that do one or a few things well instead of monolithic all-in-one programs. Of course, this requires serious management tools to keep it all together. KXStudio provides the Cadence suite of GUI tools, which many people use outside of KXStudio as well. The most JACK-focused, unix-principled tools come from Jon Liles, the author of the Non series. They provide separate mixer tool, recording tool, sequencer, and a session manager. A session manager is a tool that records all the different settings and connections that you have in JACK and saves them as a set so that you can close and later automatically re-open all these independent programs all set up the same way. 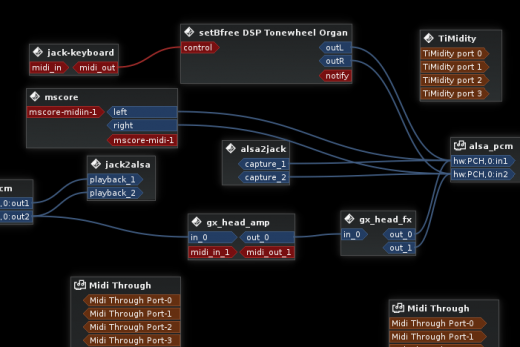 Unfortunately, while the concept of JACK and modularity makes sense, the level of support and the quality of the tools is inconsistent. Some combinations work perfectly and smoothly, but some programs offer incomplete support or even no support. Some programs support JACK but their design encourages users to do everything all internally anyway.

Beginners in GNU/Linux music making should try to understand the basic concepts of JACK. This will help them to make sense of the general ecosystem of music tools which are available, whether or not they choose to embrace the modular approach.

In my next article, I'll focus on programs that support JACK but can be used independently as well.

The Linux Musicians Forum is the best place overall for getting started and getting involved. Check out also the #opensourcemusicians IRC channel on Freenode.net (and lots of projects have their own channels too, of course). The Linux Audio Wiki is a superb resource too, even though some of it can be quite dated. Also, check out libremusicproduction.com for a great series of further tutorials and more.

In practice, setting up your system may involve some troubleshooting. On my particular laptop, for example, if I want to use reliable low-latency settings (needed for quick response when playing live with synths or effects), I need to turn off my networking and set my CPU to Performance mode. Although good guides about these topics exist (some of which I authored myself), each case varies in this complex GNU/Linux world with such diverse tools and hardware. I encourage everyone to make use of the welcoming helpful community. Nothing beats personal support. Just remember to pay-it-forward: Help improve the wikis and answer questions from later newcomers once you get comfortable yourself!

I have found that after Linux 3.0, the default kernel has been low latency enough, at least for what I do. I've had my Slackware multimedia box at a few live events and never ran into any problem running a sequencer, two synths, a looper, drum machine, recording the entire thing. Obviously mileage will vary, but all in all I've been very pleased with Linux 3+ kernels.

I've happily been using Ubuntu Studio since 2007. It's a media distribution so not only audio focused, but you can choose work flows when installing.

Hi Jimmy, glad that Ubuntu Studio has worked well for you. However, it is really lacking and out-of-date on its own. You should keep your same Ubuntu Studio install but add the KXStudio repos to it and you will instantly get far better and updated collection of resources and tools without losing anything you already use and like.

The out-of-date versions of application is not really an issue for me as I stay with LTS versions and have all I need for my purposes. There is always a gap if you want or need a later version of something. As I'm part of the Ubuntu Studio dev-team as well I try to help out improving the releases. KXStudio has done great work with tools and to simplify for the users.

I've been using Ubuntu Studio for a while for photography (and even for that I tend to add a darktable PPA). However when I recently started looking into the possibility of using it for music applications (beyond just playing music), I noticed that it didn't give you what KX Studio can give you. Of course you can add KX Studio to Ubuntu Studio, so that doesn't present too much of an obstacle to using Ubuntu Studio as a base.

Recently, however, I discovered that Ubuntu Studio is in danger of ending development this year, depending on how much interest they can muster in management and development positions for the project. I certainly hope that they stay afloat, but I'm starting to look at alternatives just in case.

It seems I could tweak Xubuntu, add KX Studio and photography and video editing apps, and apparently a Liquorix kernel, and get back the functionality that would be lost, plus some extra. In fact, I think perhaps a vicious cycle has formed where users and developers have contributed to each other's loss of interest in the project leading to the precarious position the project is in right now. I'd love to see a comeback because I've used Ubuntu Studio as a starting point for my desktop systems for years, but I'm constructing a backup plan just the same.

Yes, the last years the number of active contributors have been very low, myself included since I have not done much lately due to many personal reasons. But there are new people coming in and a switch in Project Lead after the next release as Kaj will focus on other things. I'm confident the distribution will carry on but more contributors would of course help a lot! Making your own Studio installation is not that hard. You could do the same thing yourself with Debian, any Ubuntu flavour, etc. What Ubuntu Studio want to help out with is to show what is possible in the different work flows as many might not know what different applications is available to do X or Y and how to set it up. Other than that Ubuntu Studio is "just" Ubuntu like any other.

Hi to all, and, sorry, but my englisl is horrible ('cause i'm an frenchy guy)

I'm looking for à distro, or software for making some radio, radio broadcast ...any answers ?

The options I mentioned, KXStudio especially, would do well for you. It would be ideal if you have hardware that doesn't happen to have a conflict between audio/USB and networking (like my laptop has). The resources I linked at the end are the best place to ask questions, better than here in the comments on the article. Cheers!

Ubuntu Studio is a great option. I use it (exclusively) to power my recording studio and have for the past 3 years.