Linux helped me grow as a musician

In the early days of Linux it was possible to do high-quality audio recording, but it was often difficult to set up. Then Ubuntu Studio made it a lot easier.

Back in 2000-2002, after studying B2B marketing, I started to work at an engineering office. Aside from marketing and sales stuff, I was in charge of optimizing the number of workstations and licenses to match our real needs and cut costs.

We had many expensive CAD workstations that were mainly running Unix at the time, from vendors such as SGI, IBM, and Sun, with costly CATIA, Euclid, and Unigraphics software.

I was a computer geek but because of my studies in marketing, I didn't have the opportunity to play with Unix systems. Then I discovered GNU/Linux, and I downloaded some available distributions, including Red Hat, Mandrake, and Debian. These distros were not easy to install like they are today, and often even getting the network working was difficult, but having a terminal on a cheap laptop was great.

In 2004 I adopted Ubuntu, a version of Linux that was good for new users.

Thanks to Framasoft.org, I already was using a lot of open source applications before switching to Linux, such as Firefox, OpenOffice, Gimp, and Inkscape.

I am a bass player, and I record from time to time with my friends in a studio and at home, depending on the project and the budget. With a quality sound card and a few inexpensive tools, recording audio with a Mac or PC was easy.

On GNU/Linux, I used Audacity and a pair of microphones to record "garage demos" and live gigs with a laptop. Each week we recorded two or three hours of music, which was a good way to improve our songs, archive our work, and prepare the studio sessions. For my job, Audacity made editing interviews and working on audio for an event or talk possible.

Of course, Audacity does not operate in real time, and you cannot enable or disable an effect so that it functions like a traditional digital audio workstation (DAW). Even though using Audacity is easy on GNU/Linux, you might need a different application to do heavy editing and add audio effects. However, back then, professional sound cards were mostly available for PCI or Firewire; USB audio-compliant devices are quite recent in professional audio. Because of restricted drivers, running a professional sound card on most of GNU/Linux distribution was not possible, which was frustrating. Of course, if you didn't have a good sound card, using Ardour, the best open source DAW, didn't work well.

Because I was running GNU/Linux, needing to use another operating system just to record audio was a pain. There were other distributions and add-ons, such as Planet CCRMA and 64 Studio (which is no longer active), but installing and getting them to work was complicated. Another option was to build dedicated workstations with carefully selected hardware, tweak drivers, and so on.

The beginnings of Ubuntu Studio

Like many other open source enthusiasts, I am not a developer or a sysadmin. I don't program, and I don't package software. I just like open source solutions and want to use open source tools, so I needed to find the right tool for me.

A the time, Ubuntu offered out-of-the-box drivers, codecs, and more, including restricted options. Plus its community was growing fast, so I knew I could rely on it when I had questions and needed help.

My goal was to be able to record audio with Ardour, using a quality sound card, with an easy-to-install GNU/Linux distribution. Quickly, I and a few other community members began working on the Ubuntu Studio project. At first, the project was a wiki page, explaining how to configure a vanilla Ubuntu installation for music production. Then we gathered a lot of information from forums, mailing lists, tutorial tweaks, and IRC chats with developers.

Because I had "pro" sound cards available at home and was able to borrow others via my personal networks, I spent a lot of time testing, tweaking, and reporting bugs. After checking all firmware licenses and, in some cases, contacting vendors, I found a solution to host the firmware in a repository. Other people from the Ubuntu Studio team worked on the real-time kernel, with the help of developers interested in developing a Debian real-time kernel for industrial purposes.

At this stage, using Ardour in Ubuntu to record audio with good performance became possible. We had a small repository with a few custom packages, so anyone could follow the tutorial. The solution was not perfect or always stable, but it was an important step forward.

Eventually, Canonical invited members of our team to an Ubuntu Developer Summit to meet with developers in person. The event also led to the decision to create an Ubuntu derivative dedicated to multimedia production.

We had more and more support from developers and packagers. Over two years we created artwork, did a lot of optimizations, backported recent applications, and made the most important packages available in Ubuntu repositories.

Now I use Ubuntu Studio to produce music records, interviews and tutorial videos, and more.

While discovering and adopting open source software and GNU/Linux, I learned that contributing is possible, even if you aren't a developer. As you are learning, you also can help others on forums, write documentation, report bugs, test, and help developers.

Being active in open source communities changed my life, and a few years ago it helped me to start a new career. These days I am less active in Ubuntu Studio, and prefer to spend more time using, promoting, and teaching open source software to others.

This fall, the Ubuntu Studio project will be 10 years old.

The project welcomes new contributors who want to help write documentation, back-port applications, package software, and more. Learn more about how you can contribute, and if you already use Ubuntu Studio, share your story. 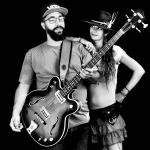 Community manager at Hyland. Founder of Une Jolie Musique, a not for profit studio using open source and open source based software only to record music and produce videos. I also teach and advise on open source, and write tutorials. Involved in various Open Source and Free Software projects and communities for many years.
More about me