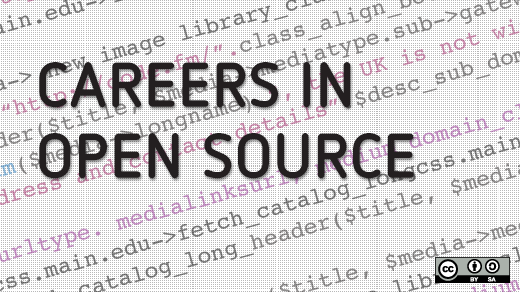 A collection of articles on jobs and careers in open source

How open source can be a gateway to your next job by Tarus Balog, on what kinds of projects can lead to a great tech career.

Why now is the time to learn R by David Smith, Chief Community Officer at Revolution Analytics and leads the open source solutions group.

Confessions of a systems librarian by Robin Isard, on his career teaching open source to others and implementing software in libraries.

Building a cloud career with OpenStack by Jason Baker, on the world of working on OpenStack.

Get a paycheck in open source, be a social activist by Don Watkins, an interview with Ross Brunson of the Linux Professional Institute.

Breaking out of the 'comfort zone' with open source by Erika Heidi, on her new role at Developer Evangelist for the PHP community.

How I landed a job in open source by David Both, on the path of his career in Linux.

The future of scientific discovery relies on open by Marcus Hanwell, an interview with Ross Mounce of the University of Bath on scientific research in the open.

Everyone's your partner in open source by Nicole Engard, on her experience working for ByWater Solutions and with Koha communities, an open source library system.

From bench scientist to open science software developer by Marcus Hanwell, on his journey from the sidelines to the frontlines of science discovery and research that matters.

Does having open source experience on your resume really matter? by Aseem Sharma, on the critical role software plays in today's economy.

We cannot do modern science unless it's open by Peter Murray-Rust of the Blue Obelisk community gives an exclusive at the past, present, and future of open science.

Want a fulfilling IT career? Learn Linux by Shawn Powers gives tips on how to get a job in Linux.

Upgrading libraries to open source Koha system by Nicole Engard, an interview with Melissa Lefebvre on her jobs as an operations manager for ByWater Solutions, implementing Koha in libraries.

Want an IT job? Learn OpenStack by Jason Baker

Teens and their first job: How to get on the path to a happy career by Jim Whitehurst