Turn your vim editor into a productivity powerhouse

Turn your vim editor into a productivity powerhouse

These 20+ useful commands will enhance your experience using the vim editor.

Editor's note: The headline and article originally referred to the "vi editor." It has been updated to the correct name of the editor: "vim."

A versatile and powerful editor, vim includes a rich set of potent commands that make it a popular choice for many users. This article specifically looks at commands that are not enabled by default in vim but are nevertheless useful. The commands recommended here are expected to be set in a vim configuration file. Though it is possible to enable commands individually from each vim session, the purpose of this article is to create a highly productive environment out of the box.

The commands or configurations discussed here go into the vim startup configuration file, vimrc, located in the user home directory. Follow the instructions below to set the commands in vimrc:

(Note: The vimrc file is also used for system-wide configurations in Linux, such as /etc/vimrc or /etc/vim/vimrc. In this article, we'll consider only user-specific vimrc, present in user home folder.)

Let's delve into the individual vi productivity commands. These commands are classified into the following categories:

To automatically align the indentation of a line in a file:

Smart Indent uses the code syntax and style to align:

Tip: vim is language-aware and provides a default setting that works efficiently based on the programming language used in your file. There are many default configuration commands, including axs cindent, cinoptions, indentexpr, etc., which are not explained here. syn is a helpful command that shows or sets the file syntax.

To set the number of spaces to display for a tab:

If you prefer to use spaces instead of tabs, this option inserts spaces when the Tab key is pressed. This may cause problems for languages such as Python that rely on tabs instead of spaces. In such cases, you may set this option based on the file type (see autocmd). 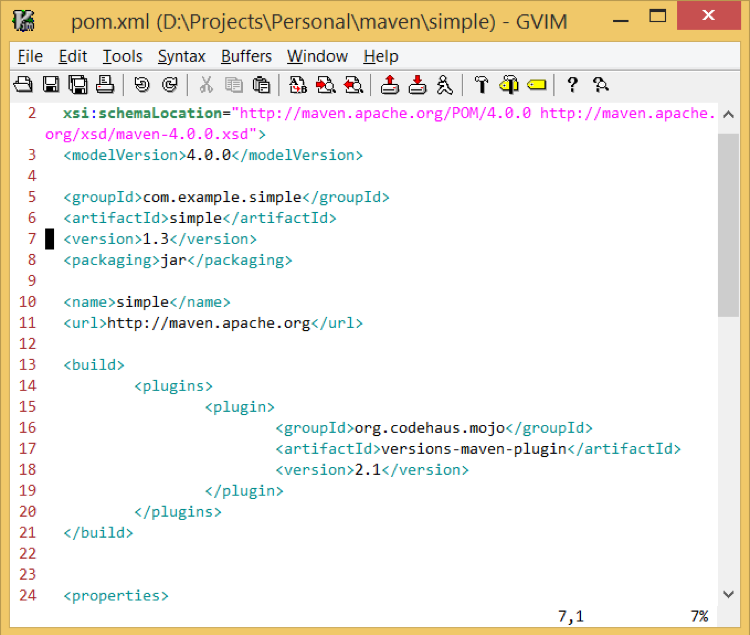 To wrap text when it crosses the maximum line width:

To wrap text based on a number of columns from the right side:

To identify open and close brace positions when you traverse through the file:

To highlight the searched term in a file: 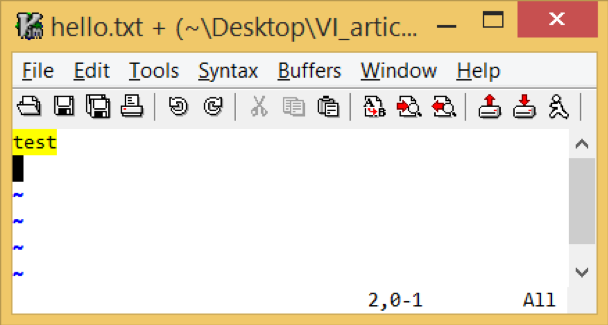 To perform incremental searches as you type: 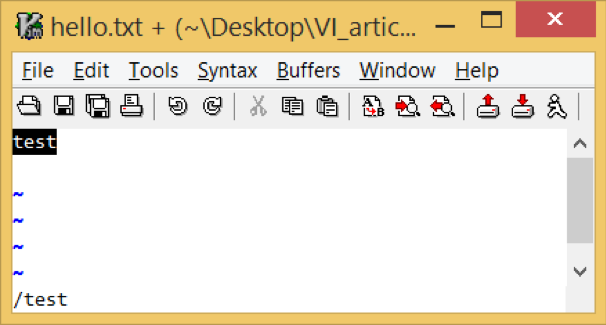 To search ignoring case (many users prefer not to use this command; set it only if you think it will be useful):

To search without considering ignorecase when both ignorecase and smartcase are set and the search pattern contains uppercase:

More Great Content
For example, if the file contains:

When both ignorecase and smartcase are set, a search for “test” finds and highlights both:

A search for “Test” highlights or finds only the second line:

For a better visual experience, you may prefer to have the cursor somewhere in the middle rather than on the first line. The following option sets the cursor position to the 5th row.

Tip: set sidescrolloff is useful if you also set nowrap.

To display a permanent status bar at the bottom of the vim screen showing the filename, row number, column number, etc.: 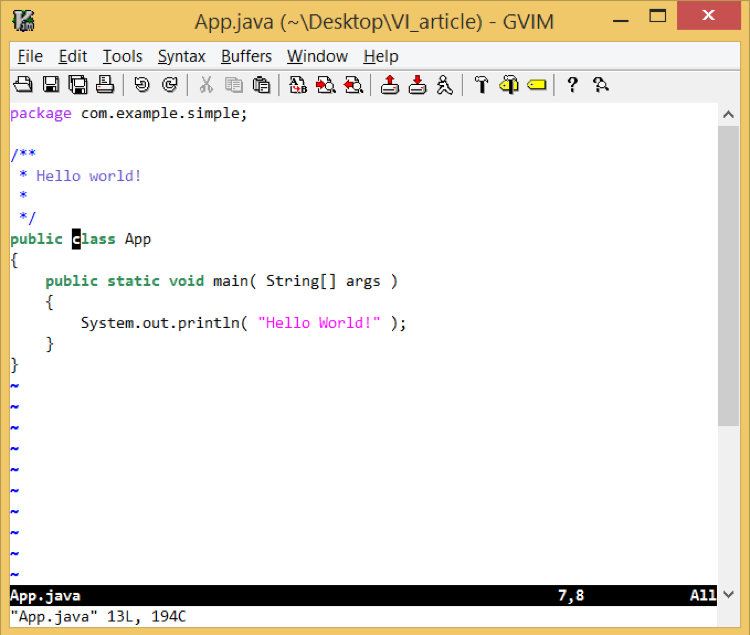 vim has a built-in spell-checker that is quite useful for text editing as well as coding. vim recognizes the file type and checks the spelling of comments only in code. Use the following command to turn on spell-check for the English language:

Disable creating backup file: When this option is on, vim creates a backup of the previous edit. If you do not want this feature, disable it as shown below. Backup files are named with a tilde (~) at the end of the filename.

Disable creating a swap file: When this option is on, vim creates a swap file that exists until you start editing the file. Swapfile is used to recover a file in the event of a crash or a use conflict. Swap files are hidden files that begin with . and end with .swp.

Suppose you need to edit multiple files in the same vim session and switch between them. An annoying feature that's not readily apparent is that the working directory is the one from which you opened the first file. Often it is useful to automatically switch the working directory to that of the file being edited. To enable this option:

To set audible alert bells (which sound a warning if you try to scroll beyond the end of a line):

If you prefer, you may set visual alert bells:

vim provides long-format as well as short-format commands. Either format can be used to set or unset the configuration.

Long format for the autoindent command:

Short format for the autoindent command:

To see the current configuration setting of a command without changing its current value, use ? at the end:

To unset or turn off a command, most commands take no as a prefix:

It is possible to set a command for one file but not for the global configuration. To do this, open the file and type :, followed by the set command. This configuration is effective only for the current file editing session. 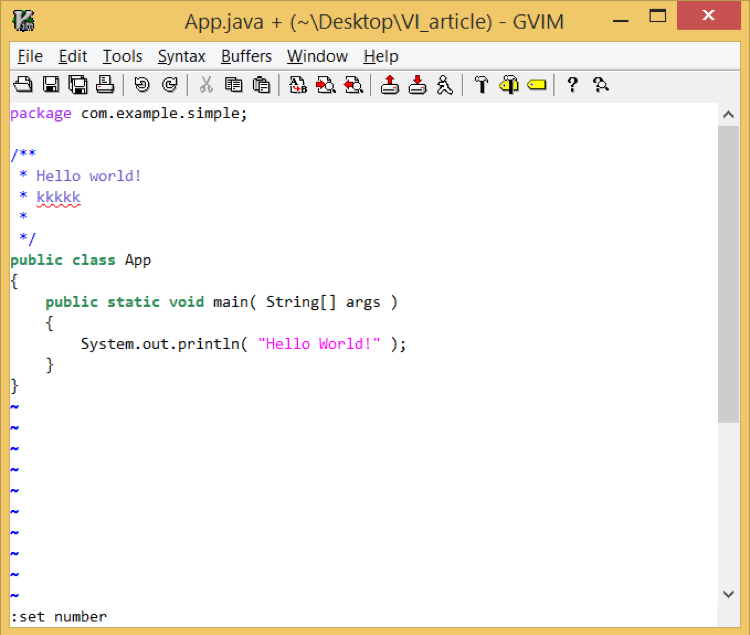 For help on a command:

These useful commands are sure to enhance your vim experience. Which other commands do you recommend?

Copy/paste this list of commands in your vimrc file:

"While "vim" is the technically correct name of the newer version of the vi editor, this article refers to it as "vi."."

It's not "the technically correct", it's the actual program. What you're using isn't vi, it's vim. It's a different program, with different code, with different capabilities, who's basic premise is that, with specific flags, it's vi-compatible. It's no more vi than Linux is UNIX or than your car is a Ford Model T. In fact, the "vi" program used in many distros is actually vim compiled and ran to be as vi-compatible as possible.

And the main reason for all this is that vi was non-extendable. Therefore you can't turn "your vi editor" into anything, because the vi editor does not support configurations, scripting, modules, themes or anything like what is described here.

Thanks for this, I think it's very important to know what each setting does, and you've explained things well

You may also be interested in the "vim-sensible" plugin: https://github.com/tpope/vim-sensible

Rather than configuring indentation rules for the whole editor, it can sometimes be handy to define this on a per-project basis, or a per-language basis, and EditorConfig is one approach to this: https://editorconfig.org/

Just a remark about “... Python that rely on tabs instead of spaces”.
Python accepts both tabs and spaces, although one should avoid mixing them in a code block. In fact, the accepted recommendation ( PEP8 at https://www.python.org/dev/peps/pep-0008/#tabs-or-spaces) is to use spaces only.

Oh boy, these are really helpful! I just might convert to Vim now....

with this tips even me can give vim a try! :)

I made a Spanish translation/version of this article in my blog:
https://victorhckinthefreeworld.com/2018/09/20/mejora-tu-experiencia-usa...