11 open source enthusiasts weigh in on why they value free software today. 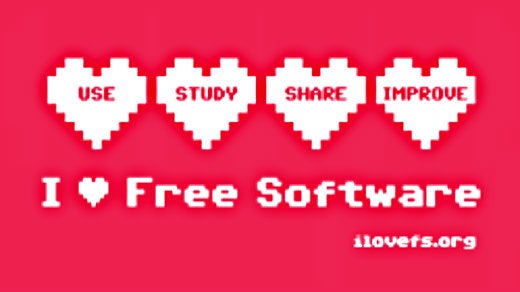 The Free Software Foundation Europe (FSFE) is a charity that supports and promote the use of free software. Their latest income and expense report for 2017, shows that much of their efforts focus on, beyond basic infrastructure costs, public awareness, legal work, and policy work.

Every year, they celebrate free software on February 14 around the world online and offline.

Galia Mancheva, a project manager for FSFE, tells me: "FSFE activists across different parts of Europe are taking the streets of their hometowns and spreading the word by celebrating with our cards, balloons, and stickers. Those activities will be streamed on Twitter, Mastodon, Facebook, and Instagram. To share online use #ilovefs to tag your favorite free software communities, technologies, and people."

Here's what folks from our contributor community had to share.

I love free software because...

"It helps underprivileged people to gain access to things which usually they cannot afford if it was not free, which would allow everyone to gain knowledge and learn." —Kedar Vijay Kulkarni, a software quality engineer at Red Hat

"It allows me to review the source code and make changes. I have written or contributed to dozens of free software programs since the 1990s, and being able to make changes has been important to compile tools for whatever system I'm on. Early in my career, I ported a C compiler to my (very old) HP-UX platform at work because I had access to the source code and could tweak it to compile it on my system." —Jim Hall, FreeDOS creator

"It allows us to test the waters and learn something new. It helps us keep our budget too because there are similar apps out there you usually have to pay for." —Jessica Repka, a Network Automation Engineer for Duke Universities Office of Information Technology

"Software began largely as a collaborative effort, where people and institutions freely shared their work so that the capabilities of what computers could do would advance the most rapidly. Then along came the scheme to fence in work, and then monetize the output. The dirty secret of the process was that much of the basis and groundwork of this process was based on the freely available knowledge of that time, but became locked in by the fence and hidden from inspection (closed source). Even later, closed sources felt free to incorporate freely released code into the dark recesses of the closed source cave. Along with this came the assertion that "our developers are smarter, which is why our code is better". Thus began the race to create vast wealth for small numbers of people.

Eventually, the charade was exposed, by those who declared that software should be free, in all its senses, that corporations had no right to hog-tie personal computers and to hide the source. Thus came GNU and later Linux. The rest is the story of people all over the world being able to not only use but contribute to and invent new open source projects which have changed the face of personal computing.

We have to love free software: Where would we be without it?" —Greg Pittman, a Linux enthusiast and member of the Scribus team

Let me explain. You can sell me something which you tell me will protect my data from other people seeing it, or changing it, or stopping me from accessing it, but unless I can see what that software is actually doing, there's no way that I can be sure that it will do those things. In fact, even if you think it's doing those things, you could be wrong, because there's only a finite number of people in your company (the one selling me the software), and maybe your auditors, who have looked at it. If it's free and open, then I can check, and my friends can check, and their friends, and their friends and so on. We have a much, much bigger pool of people to check what you've written, and the protocols and algorithms that it's based on, than you do with your closed software." —Mike Bursell, Chief Security Architect for Red Hat

"Open source software allows creators to really own their work, instead of merely leasing their creations from the vendors of proprietary software. In addition to that, open source software invites a cooperative and collaborative world where information is easily accessible for the mutual benefit of all human beings." —Don Watkins, a Linux and open source enthusiast

"A major goal and ongoing concern within the scientific community is the reproducibility of research. For research to be meaningful, it must be reproducible. Both technically and philosophically, through transparency and collaboration, free software promotes reproducible research." —Matt Calverley, PhD in Immunology and Infectious Disease

"I can use it anywhere. Even in the instances where it's more difficult to learn or use than a proprietary alternative, it's worth the investment of my personal time, because I know I'll be able to deploy, use, and train other people in the use of that free software in any environment." —Jim Salter, a sysadmin and technical author

"It allows me to help more students and families than I ever could using proprietary software. I do not have to be encumbered by software fees and restrictive user agreements." —Stu Keroff, technology coordinator at the Community School of Excellence