Python offers a rich set of options for visualizing data. I'll show you the basics of plotting in Matplotlib by creating a bar chart with grouped bars. It shows election results for the UK between 1966 and 2020: 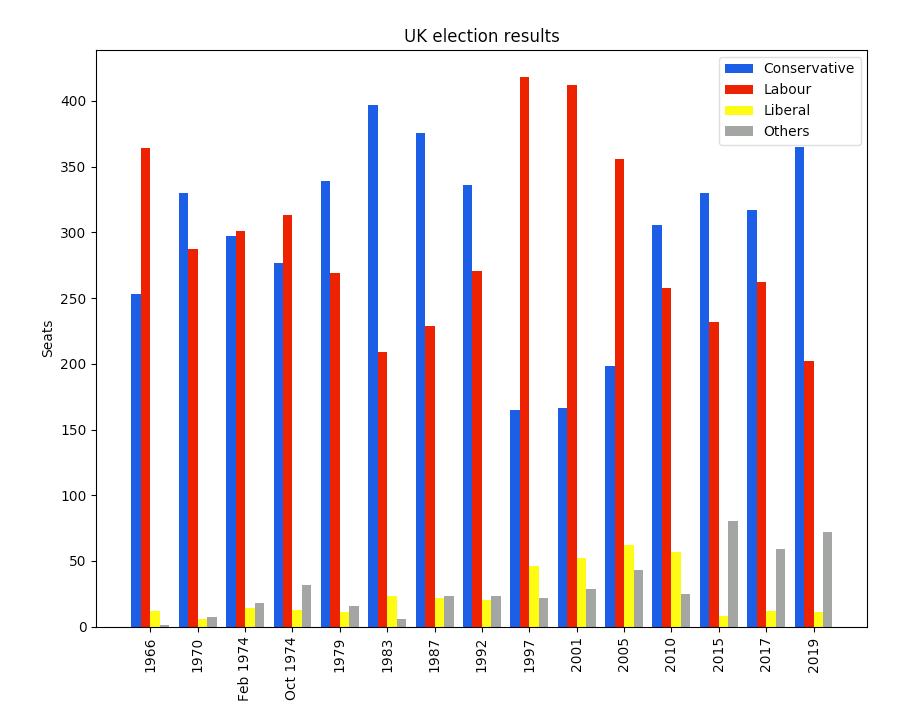 For a full comparison of Python plotting libraries, see The 7 most popular ways to plot data in Python.

Matplotlib is the alligator of the plotting zoo. It's been around for a while, but it's still got plenty of bite. Matplotlib gives you precise control over your plots—but, like anything precise and powerful, this sometimes forces you to think harder than you might want to.

To see what I mean, let's start creating the multi-bar plot. Before we go further, note that you may need to tune your Python environment to get this code to run, including the following.

It's in wide form, meaning there's a column for each political party:

Next, tell Matplotlib that you're creating a figure with a single axis in it. It gives you a Figure and Axis object. If you have several subplots, you have one Figure and several Axes.

Now add the bar charts themselves. The multi-bar chart is made by drawing four separate bar charts on the same axes—offset each bar chart by a certain amount, so they appear side-by-side. This means you have to work out how to calculate the offset for each bar chart, and if you wanted to add another political party, you'd have to rethink your calculation.

That's the plot it created on its own, but you still need to add some axis labels and a legend:

Finally, invoke the magic word to make the plot appear on the screen:

It took a bit of mental effort, but you've got a nice, clean plot.

You can probably see how this API gives you a lot of power. Let's imagine you want to plot a line showing the difference in seats between the Conservative and Labour parties. While you're at it, add a set of gridlines in the background and set some sensible Y-axis limits: 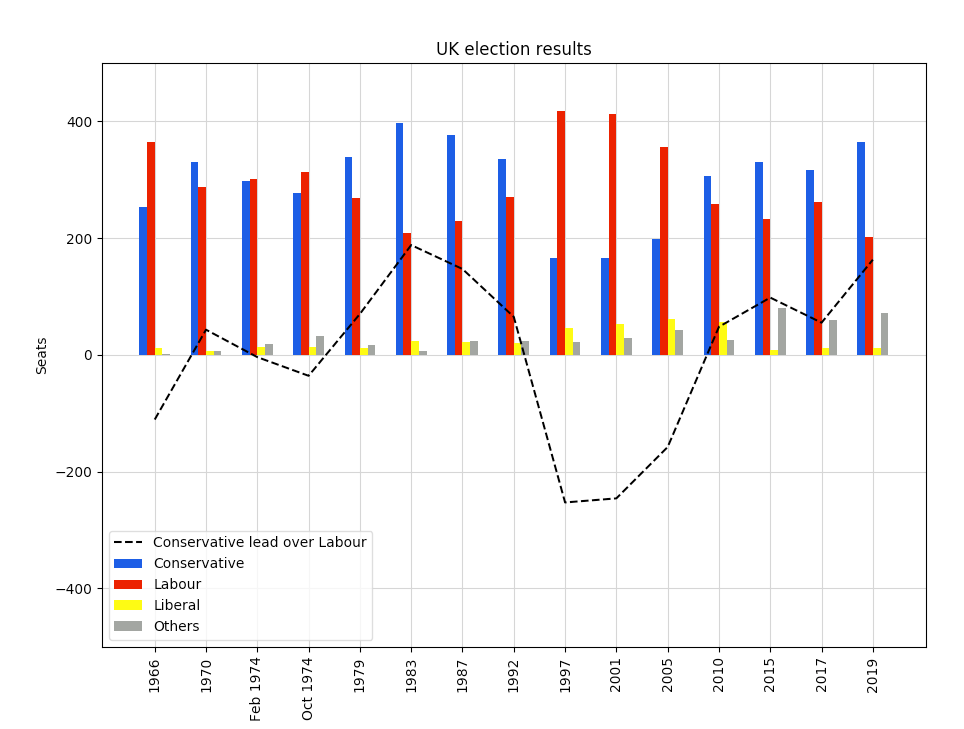 More Python Resources
You can get it exactly how you want it because Matplotlib gives a low-level API that gives precise control of how things look and where they are displayed.

If you prefer to run this elsewhere, you can copy this example as an Anvil app here (Note: Anvil requires registration to use).

Great chart, but can we make it simpler?

All this power is great, but there must be a handful of plots that people want to make all the time. Why can't somebody wrap Matplotlib in a high-level interface that makes things much simpler? That's been done, and it's called Seaborn. We will look into that next time.

In the meantime, congratulations on your first Matplotlib visualization!

This article is based on How to make plots using Matplotlib on Anvil's blog and is reused with permission.

Compare seven libraries and APIs for plotting in Python, and see which best meets your needs.
Shaun Taylor-Morgan

Learn how to do a common data science task with Python and GNU Octave.
Cristiano L. Fontana (Correspondent)

In part 1 of this series on machine learning with Python, learn how to prepare a National Football League dataset for training.
Christa Hayes

Show progress in your Python apps with tqdm

One of the things about plotting is that, just because you CAN do something does not mean you SHOULD do it.
There is a very informative book, "The Visual Display of Quantitative Information", by Edward Tufte, which explains and shows a number of misguided ideas that people have about making graphs. One of these is a visual vibration effect that comes from having alternating lines and spaces such as are shown in the bar graphs above.