Try Linux on any operating system with VirtualBox | Opensource.com

Try Linux on any operating system with VirtualBox

VirtualBox makes it easy for anyone to try Linux. You don't even need experience with the command line to set up a simple virtual machine to tinker with Linux. I'm kind of a power user when it comes to virtual machines, but this article will show even novices how to virtualize a Linux system. In addition, it provides an overview of how to run and install a Linux system for testing purposes with the open source hypervisor VirtualBox.

Before starting, you should understand the difference between the two operating systems (OSes) in this setup:

Both systems, host and guest, must interact with each other when it comes to input/output, networking, file access, clipboard, audio, and video.

In this tutorial, I'll use Windows 10 as the host system and Fedora 33 as the guest system.

To start with virtualization:

Download the image of the Linux distribution you want to try out. It does not matter if it's a 32-bit or 64-bit OS image. You can even start a 64-bit OS image on a 32-bit host system (with limitations in memory usage, of course) and vice versa.

Considerations: If possible, choose a Linux distribution that comes with the Logical Volume Manager (LVM). LVM decouples the filesystem from the physical hard drives. This allows you to increase the size of your guest system's hard drive if you are running out of space.

Now, open VirtualBox and click on the yellow New button: 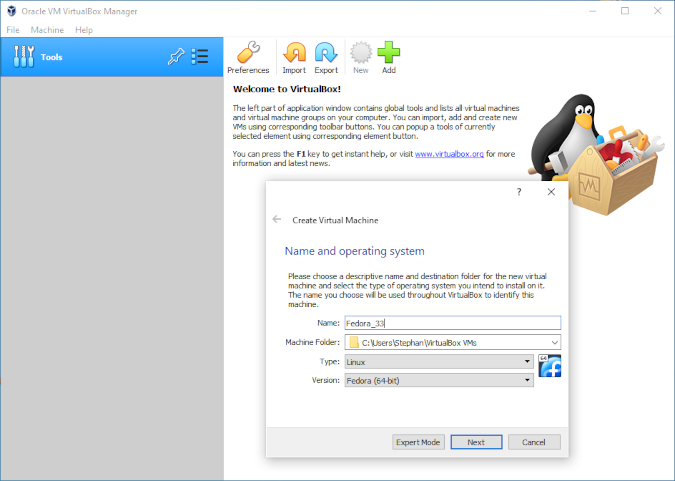 Next, configure how much memory the guest OS is allowed to use: 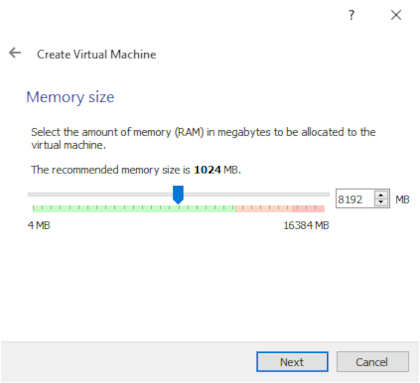 My recommendation: Don't skimp on memory! When memory is low, the guest system will start paging memory from RAM to the hard drive, worsening the system's performance and responsiveness extremely. If the underlying host system starts paging, you might not notice. For a Linux workstation system with a graphical desktop environment, I recommend at least 4GB of memory.

Next, create the hard disk: 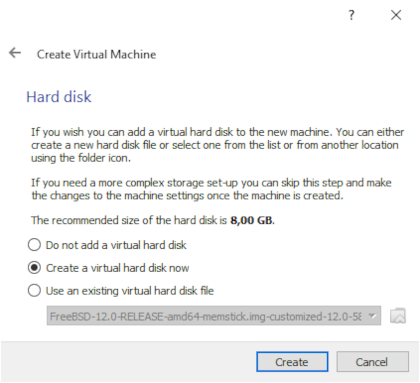 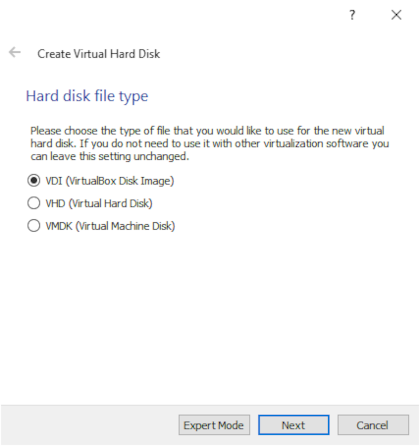 In this window, I recommend choosing dynamically allocated, as this allows you to increase the size later. If you choose fixed size, the disk will be probably faster, but you won't be able to modify it: 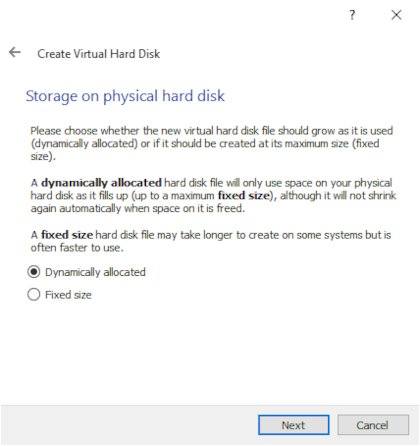 With a Linux distribution that uses LVM, you can start with a small hard disk. If you are running out of space, you can increase it on demand.

Note: Fedora's website says it requires a minimum of 20GB free disk space. I highly recommend you stick to that specification. I chose 8GB here so that I can demonstrate how to increase it later. If you are new to Linux or inexperienced with the command line, choose 20GB. 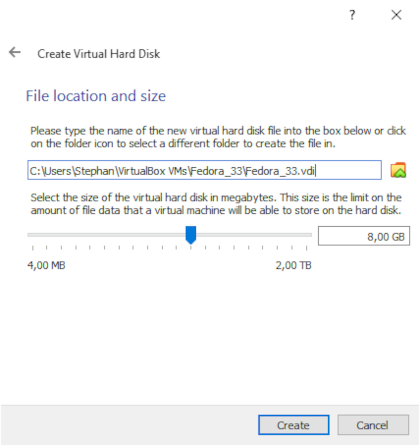 After creating the hard drive, select the newly created virtual machine from the list in VirtualBox's main window and click on Settings. In the Settings menu, go to System and select the Processor tab. By default, VirtualBox assigns only one CPU core to the guest system. On a modern multicore CPU, it should not be any problem to assign at least two cores, which will speed up the guest system significantly: 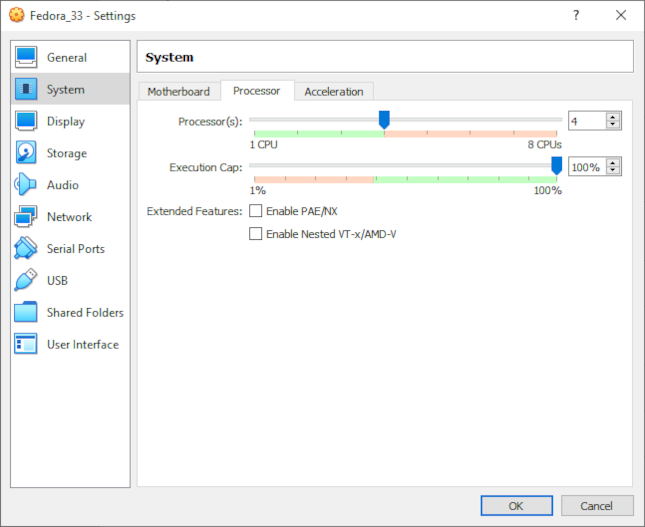 The next thing to take care of is the network setup. By default, VirtualBox creates one NAT connection, which should be OK for most use cases: 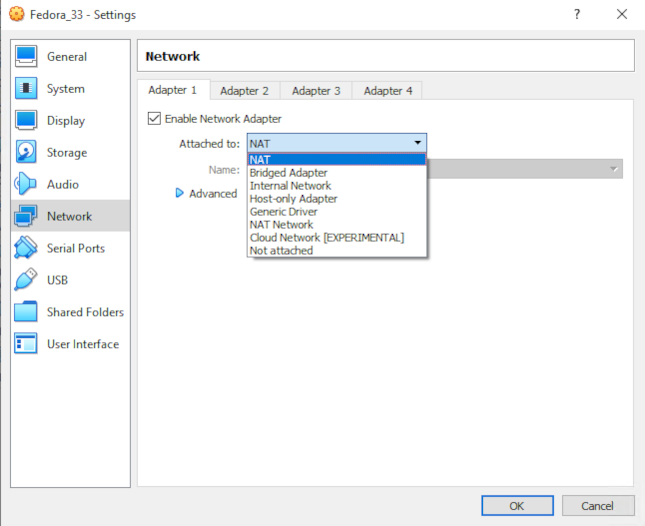 You can create more than one network adapter. Here are the most common types:

Navigate to Storage and select the virtual optical drive. Click on the CD icon on the right, and select Choose a disk file…. Then assign the downloaded Linux distribution image you want to install: 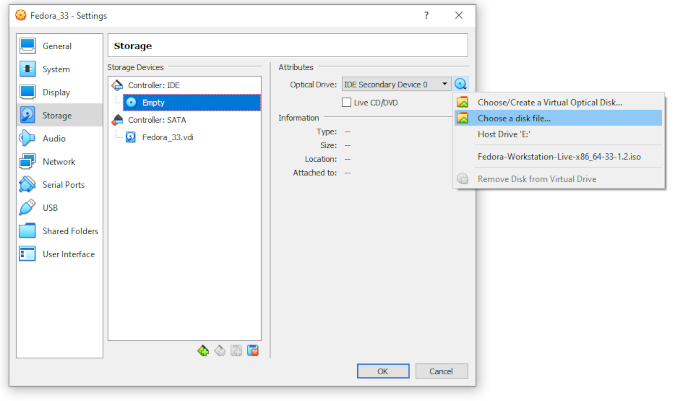 The virtual machine is now configured. Leave the Settings menu and go back to the main window. Click on the Green arrow (i.e., the start button). The virtual machine will start up and boot from the virtual optical drive, and you will find yourself in your Linux distribution's installer: 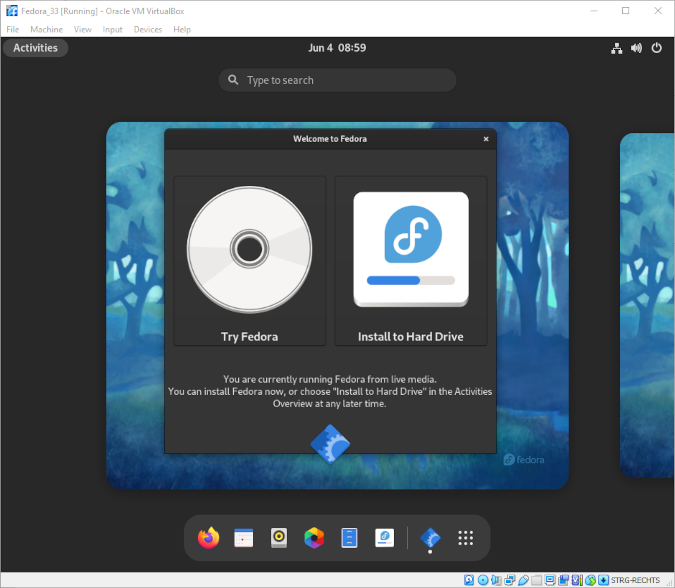 The installer will ask you for partitioning information during the installation process. Choose Custom: 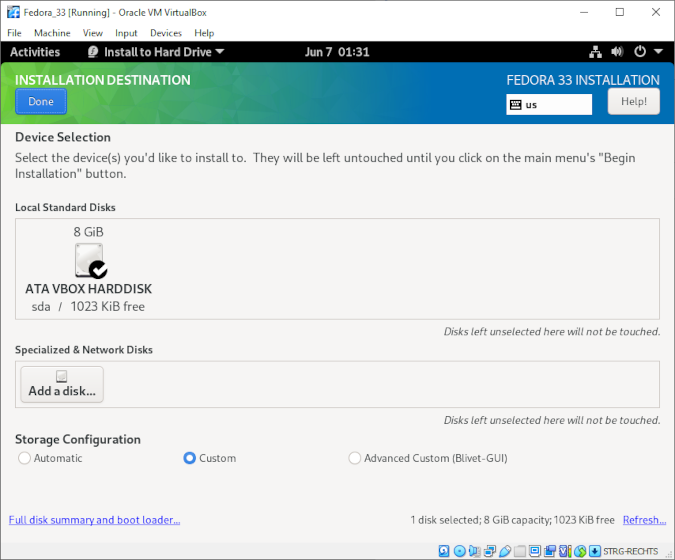 Note: I'm assuming you're creating this virtual machine just for testing purposes. Also you don't need to care about hibernation for your guest system, as this function is implicitly provided by VirtualBox. Therefore, you can omit the swap partition to save disk space on your host system. Keep in mind that you can add a swap partition later if needed. In An introduction to swap space on Linux systems, David Both explains how to add a swap partition and choose the correct size.

Fedora 33 and later offer a zram partition, a compressed part of the memory used for paging and swap. The zram partition is resized on demand, and it is much faster than a hard disk swap partition.

To keep it simple, just add these two mount points: 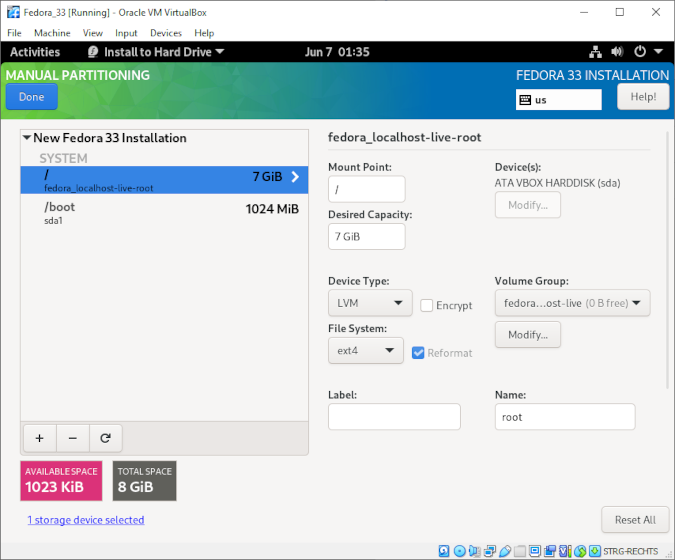 Apply the changes and proceed with the installation.

After you finish the installation, boot from the hard drive and log in. Now you can install VirtualBox Guest Additions, which include special device drivers and system applications that provide:

To install them, click on the top menu in Devices and select Insert Guest Additions CD image…: 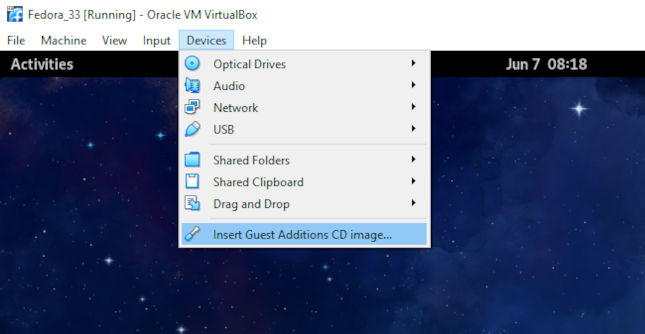 On most Linux distributions, the CD image with the Guest Additions is mounted automatically, and they are available in the file browser. Fedora will ask you if you want to run the installation script. Click Run and enter your credentials to grant the process root rights:

When the installation is finished, reboot the system.

Creating an 8GB hard disk was a dumb decision, as Fedora quickly starts signaling that it is running out of space:

As I mentioned, a disk space of 20GB is recommended, and 8GB is the absolute minimum for a Fedora 33 installation to boot up. A fresh installation with no additional software (except the VirtualBox Guest Additions) takes nearly the whole 8GB of available space. Don't open the GNOME Software center or anything else that might download files from the internet in this condition.

Luckily, I chose to use LVM, so I can easily fix this mishap.

Shut down the virtual machine. If your host system is running Windows, open a command prompt and navigate to C:\Program Files\Oracle\VirtualBox. Resize the disk to 12,000MB with the following command:

Boot the virtual machine and open the Disks utility. You should see the newly created unassigned free space. Select Free Space and click the + button: 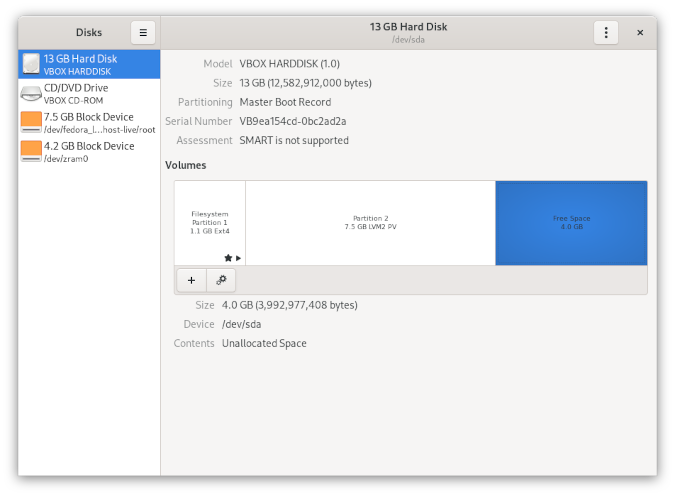 Now, create a new partition. Select the amount of free space you want to use: 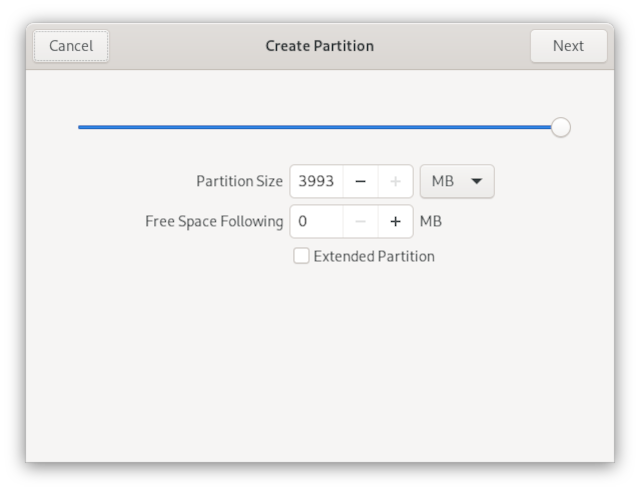 You don't want to create a filesystem or anything else on your new partition, so select Other: 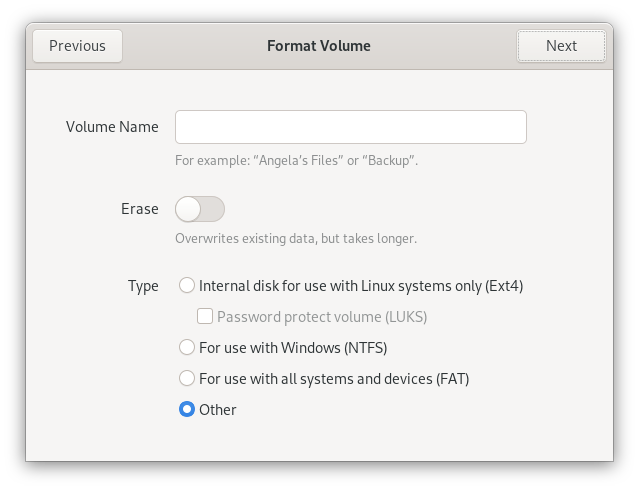 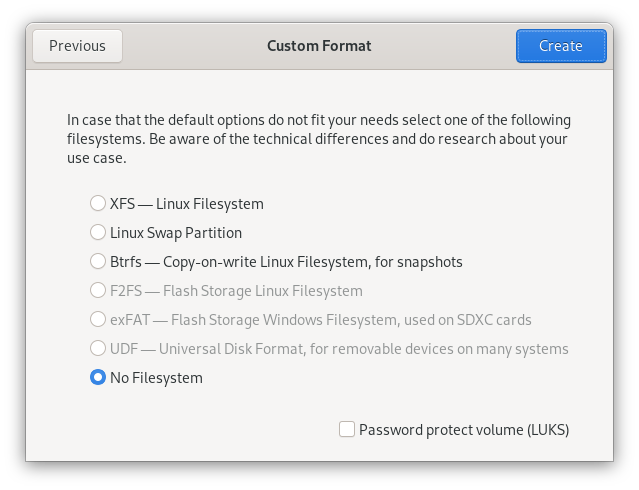 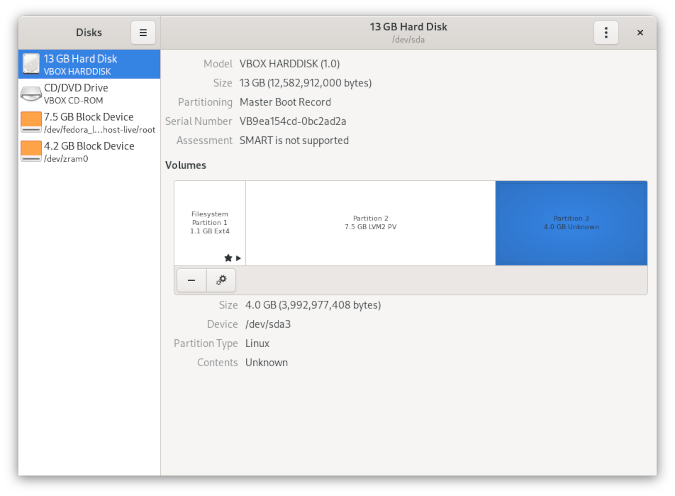 There is a new partition device, /dev/sda3. Check your LVM volume group by typing vgscan:

Now you have everything you need. Extend the volume group in the new partition:

Because the volume group is larger, you can increase the size of the logical volume. The command vgdisplay shows that it has 951 free extends available:

Increase the logical volume by 951 extends:

After you increase the logical volume, the last thing to do is to resize the filesystem:

Done! Check the Disk Usage Analyzer, and you should see that the extended space is available for the filesystem.

With a virtual machine, you can check how a piece of software behaves with a specific operating system or a specific version of an operating system. Besides that, you can also try out any Linux distribution you want to test without worrying about breaking your system. For advanced users, VirtualBox offers a wide range of possibilities when it comes to testing, networking, and simulation.

Gaming, business, budgeting, art, programming, and more. These are just a few of the many ways anyone can use Linux.
Seth Kenlon (Red Hat)

With Linux, novice users will gain a smooth, polished desktop experience with a multitude of familiar applications.
Tomasz

Fedora Media Writer is a hassle-free way to create a live USB to give Linux a try.
Sumantro Mukherjee (Red Hat, Correspondent)

Stephan Avenwedde - Stephan is a technology enthusiast who appreciates open source for the deep insight of how things work. Stephan works as a full time support engineer in the mostly proprietary area of industrial automation software. If possible, he works on his Python-based open source projects, writing articles, or driving motorbike.
More about me

Thanks so much Stephan. I am helping cover the techsupport forum for an Open University (www.open.ac.uk) operating systems module where students have to install raspberry pi linux on Virtual Box. This article will be a useful resource to point folks to.

My wife completed an IT degree ending last year. The college used VirtualBox a lot because they mostly used Linux distributions for the networking and development components, but most of the students had Windows laptops. As it happens we use Linux at home and I was familiar with VirtualBox already so my wife had an easier time of it, but it's always good to have nice examples.