These traditional Linux utilities have been revitalized with modern replacements.

Linux has a good track record for software support. There are about 60 commands in man section 1 of Unix 1st edition, and the majority still work today. Still, progress stops for no one. Thanks to vast global participation in open source, new commands are frequently developed. Sometimes a new command gains popularity, usually because it offers new features, or the same features but with consistent maintenance. Here are ten old commands that have recently been reinvented.

1. Replace man with cheat or tealdeer

The man page is functional, and it works well for what it does. However, man pages aren't always the most succinct at demonstrating how to use the command you're trying to reference. If you're looking for something a little more to the point, try cheat or tealdeer.

The ifconfig command provides information about your network interfaces, whether they're physical or virtual.

3. Replace yum with dnf and apt-get with apt

Package managers tend to be slow to change, and when they do they often work hard to maintain backward compatibility. Both the yum command and the apt-get command have had improvements lately. The changes are usually aliased or designed to work in both their old and new syntax:

Before there was dnf there were a variety of utilities for yum to help users get reports on their packaging system configuration. Most of those extra functions got included by default with dnf. For instance, repoquery is a subcommand of dnf, and it provides a list of all installed packages:

The pip command is a package manager for Python. It hasn't been replaced, but the preferred syntax has been updated. The old command:

The ls command hasn't been replaced.

Rather, it hasn't been replaced again.

The ls command was originally its own binary application, and it's still available as one. Eventually, though, the Bash shell included its own ls built-in command, which by default overrides any installed ls command.

Recently, the exa command has been developed as, depending on your preferences, a better ls. Read about it in Sudeshna Sur's exa command article, and then try it for yourself.

7. Replace du with dust or ncdu

There's nothing wrong with the du, which reports on how much disk space is used on your hard drives. It does its job well, but to be fair it's pretty minimal.

If you're looking for a little variety, try the ncdu command or the dust command.

The cat command is, aside from being overused by the best of us, is a simple and direct command. It reads the contents of any number of files, and outputs it to standard input.

Its output is pretty basic, so if you're looking for something with syntax highlighting and flexible output options, try the bat command instead.

Does bat also replace the tac command? No, don't worry, for now at least tac is safe in its position as the command that outputs a file in reverse. (Unless, that is, you count sed.)

The netstat command has largely been replaced by the ss command, although of all the commands on this list it's possibly the most hotly debated. The ss command provides much of the same functionality, but as Jose Vicente Nunez points out in his six deprecated commands article, there are gaps and differences in functionality. Before switching wholesale to ss, try it and compare it with how you use netstat now.

I use find to located files, as an input source for GNU Parallel, and more. I'm pretty familiar with it, but I have to admit that its syntax is a little clunky. The fd command seeks to improve upon that. For instance, suppose you're looking for a file called example, but you can't remember what file extension you used. With find, the syntax might look something like this:

With fd, the syntax is:

And suppose you want to grep command to search through the results for the phrase "zombie apocalypse". Using find:

Read more about it in Sudeshna Sur's fd article, and then try it for yourself.

For even more updates to classic commands, download our cheat sheet below. 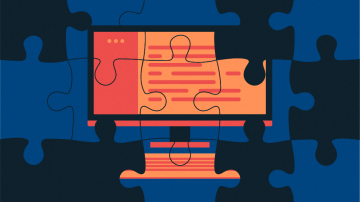